A group of Jewish employees of Google has called on the tech giant to increase its support of Palestinians as a response to the ongoing fighting between Israel and the Hamas terror group that rules the Gaza Strip.

The group, Jewish Diaspora in Tech, describes itself as a community of members working in the technology industry.

In an internal letter sent to Google CEO Sundar Pichai, the group said it was “concerned about the internal dialogue around the political and racial violence in Israel and Palestine.”

“Both Israelis and Palestinians are hurting right now, but ignoring the destructive and deadly attacks faced by Palestinians erases our Palestinian coworkers,” the authors wrote in the letter, a version of which was available to the public online.

Palestinians inspect the damage following an Israeli air strike in Rafah in the southern Gaza Strip, on May 19, 2021 (Abed Rahim Khatib/Flash90)

They called on Google to make a company-wide statement “recognizing the violence in Palestine and Israel, which must include direct recognition of the harm done to Palestinians by Israeli military and gang violence.”

It also urged Google “to reject any definition of antisemitism that holds that criticism of Israel or Zionism is antisemitic,” which is “limiting freedom of expression and distracting from real acts of antisemitism.” 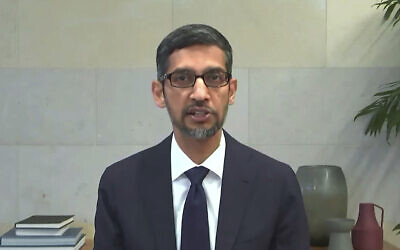 The company should also affirm its commitment to human rights as “many of Israel’s actions violate the UN human rights principles, which Google is committed to upholding,” the letter said. The group also asked for the review of contracts and corporate donations with “institutions that support Israeli violations of Palestinian rights.” It pointed to the Israel Defense Forces as an example of such an institution.

The letter also stated that “we object to the conflation of Israel with the Jewish people, affirm that anti-Zionism is not antisemitism.” 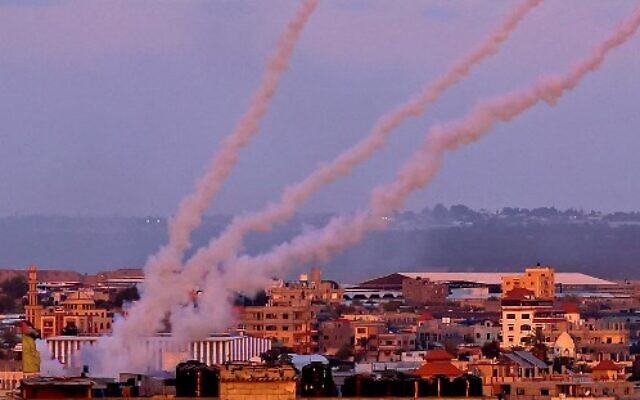 Rockets are launched towards Israel from the southern Gaza Strip, on May 17, 2021. (SAID KHATIB / AFP)

The group was formed last year to counter what was seen as pro-Israel attitudes in Google’s official employee resource group Jewglers, the Verge reported Tuesday. According to the report, two Google workers say that Jewglers “has supported pro-Israel discussions and is not a safe space to express anti-Zionist beliefs.”

So far, at least 250 people have signed the letter to Pichai, the Verge reported.

Twelve people in Israel, including a 5-year-old boy and a 16-year-old girl, have been killed in the rocket fire from Gaza, and hundreds have been injured. 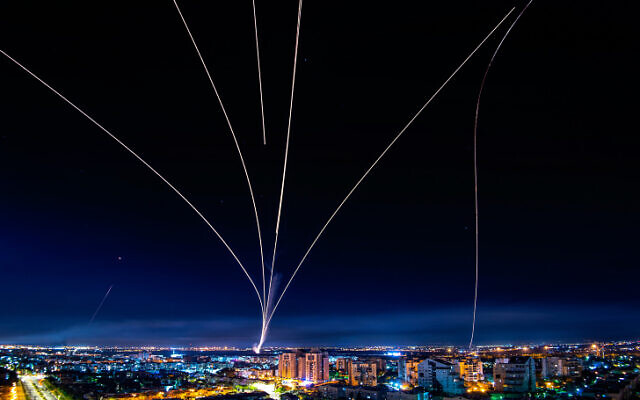 A long exposure picture shows iron dome anti-missile system fires interception missile as rockets fired from the Gaza Strip to Israel, as it seen from the southern Israeli city of Ashdod, May 16, 2021. (Avi Roccah/Flash90)

According to Gaza’s Hamas-run Health Ministry, at least 212 Palestinians have been killed so far in the nine days of the conflict, including more than 60 children. It was not immediately clear if this ministry tally included all of those killed or if there were Hamas operatives not included in the count. According to the IDF, more than 120 of those killed were members of Hamas and over 25 were members of the Palestinian Islamic Jihad as of Monday night.

On its webpage, Jewish Diaspora in Tech says that “by mobilizing our access and our resources, we seek to act in solidarity with all peoples at the forefront of the fight against white supremacist violence and the carceral state.”

In a list of its values, it says it supports “celebrating the anti-colonialist traditions of our Jewish ancestors” and that it opposes “borders on stolen land,” without making a specific reference to any territory.

The working definition of antisemitism by the International Holocaust Remembrance Alliance, which is widely accepted as a standard, states that it is antisemitic to “apply double standards by requiring of it [Israel] a behavior not expected or demanded of any other democratic nation.”