Joint List MK Ofer Cassif said Sunday that he would file an official complaint with the police after he was beaten and punched by officers on Friday during a protest in East Jerusalem, rejecting the force’s claim that he was to blame for the violence.

He also said he would ask Attorney General Avichai Mandelblit to open his own investigation into the incident.

Cassif, the only Jewish Knesset member in the predominantly Arab Joint List party, was participating in a weekly demonstration in the Sheikh Jarrah neighborhood against planned evictions when the violence broke out.

Officers initially said that Cassif had hit them first. The most recent version of events offered by police said that the Knesset member had incited the officers to beat him, allegedly saying that he dared them to hit him.

MK Ofer Cassif, a Jewish member of the predominantly Arab Joint List electoral alliance, is pictured after being beaten and detained by Israeli police during a demonstration in Jerusalem’s Sheikh Jarrah neighbourhood on April 9, 2021. (AHMAD GHARABLI / AFP)

Speaking to the Kan public broadcaster Sunday morning, Cassif described the latest police claim as “a chain of lies.”

“I did not say anything. Of course they invented it,” Cassif said. “But even if it were true — it does not justify this sort of barbaric violence against any citizen, Knesset member or not.”

While saying he would be filing a police complaint over the incident and expected the Police Internal Investigations Department to open an investigation, Cassif also called on the attorney general to open his own probe.

He said this was necessary “due to the possibility of attempts to disrupt the [Police Internal Investigations Department] investigation.”

Additionally, Cassif said he would file a complaint with the Knesset Guard about death threats he had received in the wake of the incident. 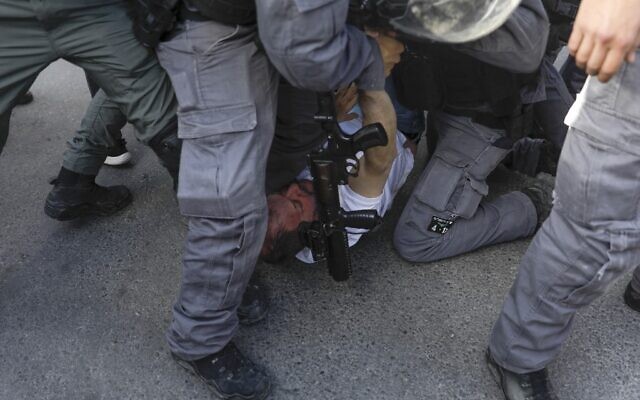 In footage of the Friday incident, Cassif can be seen arguing with police officers amid a crowd, before one officer pushes him.

A mask-clad Cassif appeared to say something, with the officers proceeding to strike and violently grab him.

Cassif then reached his hand toward the face of one of the officers, who punched the MK on top of the head.

After wrestling Cassif to the ground, some of the officers appeared to continue beating him, as shouts of “shame” could be heard from the demonstrators.

In another clip, an officer can be seen kneeling on Cassif’s face as he was on the ground.

Cassif sustained light injuries, his glasses were broken and his shirt was ripped during the scuffles. Police used stun grenades to clear protesters.

Cassif says that the footage speaks for itself and that the police must release evidence that he incited the violence before making such an “outrageous claim.”

“Beyond the barbaric behavior of the police, [their claims] add guilt to the crime with lies. They are constantly changing versions. And suppose I did say something terrible, which I didn’t, it does not justify violence by someone who is supposed to representing the law,” Cassif charged.

He said that the officers knew he was a Knesset member but that the violation of his parliamentary immunity was not the issue.

“They knew I was a Knesset member. A quarter of an hour before the incident, the commander of the unit spoke to me because I was an MK. But even if I were not, the violence is unjustified, no matter if it is against right-wing, left-wing, ultra-Orthodox or Arab,” he said.

Footage shows nearby protesters shouting at officers, telling them to stop and identifying Cassif as a lawmaker.

“He’s an MK. Are you psychopaths?” one person can be heard asking in the video shown on Channel 12 news on Saturday. “You’re a group of psychopaths!”