The Knesset legal adviser said Thursday that members of the Arab-majority Joint List alliance who changed the wording of their commitment during the new parliament’s swearing-in ceremony, would be denied some of their rights as MKs until they give the proper declaration.

Joint List members sparked an outcry on Tuesday when they substituted the traditional commitment to serve Israel and the Knesset with commitments to fight “apartheid,” “the occupation” and “racism.”

The sanctions likely won’t last long, if at all, as the MKs are expected to redeclare their oaths on Monday, the Walla news site reported.

“In this case, the correct thing, alongside the denial of rights, is to allow the MKs to redeclare commitment,” Afik said, adding that these sanctions were to be imposed before cutting their salaries, provided they amended their commitment “as required.”

The standard oath of office for lawmakers beginning Knesset terms states: “I commit to be faithful to the State of Israel and to fulfill with devotion my cause in the Knesset.”

During the swearing-in ceremony, the names of lawmakers are called and they state, “I commit.”

But in a move proposed by Hadash MK Ofer Cassif, four of the Joint List’s six MKs each brought their own wording.

“I commit to fighting against the occupation,” said Hadash’s Aida Touma-Suleiman.

Cassif said, “I commit to fighting against racism and racists.”

The alterations were met with loud protestations and anger from other lawmakers. Knesset Speaker Yariv Levin of Likud disqualified the declarations and the MKs were escorted out of the plenum for disrupting proceedings.

The Joint List is made up of the Hadash, Balad and Ta’al parties. MKs Ayman Odeh, Touma-Suleiman and Cassif of Hadash and Sami Abu Shehadeh of Balad all added various causes to their commitments statements. 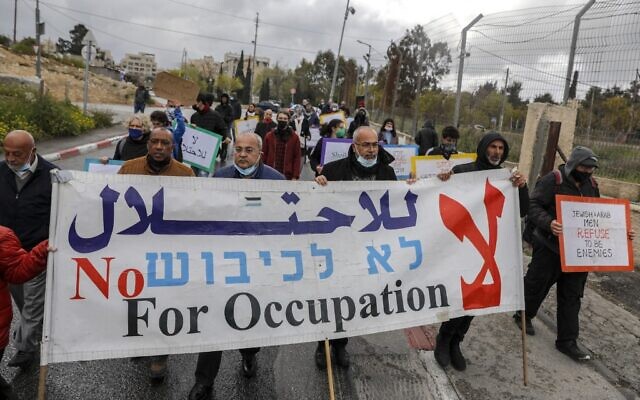 Ahmad Tibi (C-L), a member of the Knesset and leader of the Arab Movement for Change (Ta’al) party, takes part in a demonstration in Jerusalem’s Sheikh Jarrah neighborhood on April 2, 2021. (AHMAD GHARABLI / AFP)

In a separate parliamentary protest Thursday, Ahmad Tibi walked out of the traditional Knesset ceremony for Holocaust Remembrance Day in which the names of victims are recited, in protest of the participation of new far-right lawmaker Itamar Ben Gvir of Religious Zionism.

“I will never legitimize a racist who denies my and my people’s human rights,” Tibi said, referring to the head of the neo-Kahanist Otzma Yehudit party, which merged into Religious Zionism before the election. 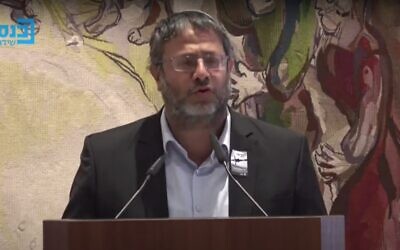 Ben Gvir shot back that Tibi “insulted the memory of the survivors and victims,” alleging that the Ta’al faction leader is “a terror supporter who shouldn’t be in the Knesset.”

The statements by the Arab lawmakers and Tibi’s walkout were not the only unusual aspect of the new Knesset’s first days.

The 24th Knesset was sworn in with the prospect of yet another election looming following the fourth inconclusive parliamentary poll in two years.

The ceremony, usually a festive event, was a muted and somewhat dour affair, as the country remains gripped by an ongoing political crisis that shows little sign of abating.

The ceremony was held after Rivlin tasked Benjamin Netanyahu, the Likud leader, with forming a government, while saying he was doing so reluctantly — noting the apparently slim prospects for any party leader to assemble a coalition and the incumbent prime minister’s ongoing corruption trial, which was taking place concurrently across town in Jerusalem.