AMMAN, Jordan — The Jordanian press warned Sunday against attempts to harm the “security and stability” of the kingdom, the day after a security sweep involving a half-brother of King Abdullah II.

A top former royal aide was among several suspects arrested Saturday as former crown prince Hamzah bin Hussein said in a video sent to the BBC that he had been confined to his home and his communications cut.

In a front-page editorial on Sunday, official newspaper Al-Rai warned that “yesterday’s security operation is an expression of a red line that must not be crossed or even approached, and which is linked to the supreme interests of the kingdom, its security and stability.”

“Some people are trying to create the illusion of an attempted coup in Jordan, and trying to implicate Prince Hamzah in their sick fantasies,” it continued.

“All that happened was that some of the prince’s actions were used to target Jordan’s security and stability.”

Pro-government newspaper Addustour did not publish an editorial about Saturday’s events, but carried official statements and reported that “moves to target Jordan’s security” had been “thwarted.”

Independent daily Al-Ghad wrote about the global “solidarity with Jordan’s moves to protect its security.”

In a video the BBC said it obtained from his lawyer, Prince Hamzah said a number of his friends had been arrested, his security detail removed and his internet and phone lines cut.

He denied being part of “any conspiracy or nefarious organization,” but said the Hashemite kingdom had “become stymied in corruption, in nepotism, and in misrule” where no one was allowed to criticize the authorities. 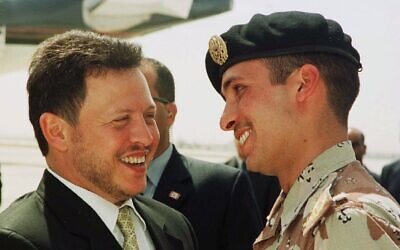 The army denied Saturday that Prince Hamzah, who holds no official position, had been detained.

But the head of the Joint Chiefs of Staff, Major General Yousef Huneiti, said the prince had been “asked to stop some activities that could be used to shake the stability and security of Jordan.”

Hamzah is the eldest son of late King Hussein and his American wife Queen Noor. He has good relations officially with Abdullah, his half-brother, and is a popular figure close to tribal leaders.