AMMAN — Thousands of people demonstrated on Friday in Jordan to celebrate the “victory of the resistance” against Israel, after a ceasefire between the Jewish state and Palestinian terror groups in Gaza.

Responding to a call by the Muslim Brotherhood, some 10,000 people gathered in the Sweimeh region near the border with the West Bank.

Demonstrators carried banners reading: “Jerusalem is the symbol of victory,” “Congratulations on the victory of the resistance” and “The resilience of Gaza led to victory.”

A ceasefire was announced on Thursday between Israel and Palestinian groups, including Hamas, which controls the Gaza Strip, after 11 days of deadly fighting in the worst hostilities between the two sides in years.

Israeli security forces have clashed with Palestinian protesters in the West Bank and East Jerusalem, and there has also been violence between Jews and Arab Israelis in mixed cities within Israel.

Throughout the fighting, demonstrations were held almost daily in Jordan in solidarity with the Palestinians.

Supporters of Jordan’s Muslim Brotherhood take part in a protest in the village of Sweimeh, near the Jordanian border with the West Bank, on May 21, 2021 (Khalil MAZRAAWI / AFP)

Around half of Jordan’s 10 million-strong population is of Palestinian origin, including some 2.2 million refugees registered with the United Nations.

Demonstrators on Friday carried Jordanian and Palestinian flags and chanted “Death to Israel” and “Let’s trade the olive branch for the gun.”

Jordan signed a peace deal with Israel in 1994.

In Karameh, an area near the West Bank border, another few thousand demonstrators, many of them youths dressed in Jordanian and Palestinian keffiyeh scarves, burned Israeli flags and chanted slogans against the peace deal.

Karameh is the site of a 1968 battle — fought a few months after the defeat of Arab states by Israel in 1967 — between a combined force of Palestinian fighters and Jordanian army soldiers against Israeli troops, and is symbolic across the Arab world. 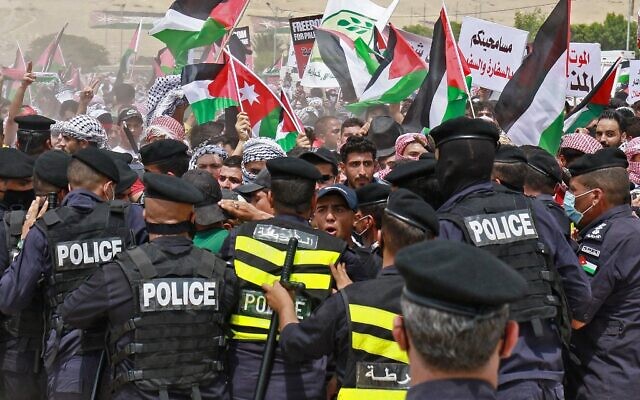 Jordanian police officers surround protesters during a demonstration in solidarity with Palestinians, in the town of Karameh on the border with Israel, on May 21, 2021. (Khalil MAZRAAWI / AFP)

In the capital, over 1,000 protesters set off on a march from the Al-Husseini Grand Mosque in central Amman after Friday prayers.

They demanded the expulsion of the Israeli ambassador and the closure of the Jewish state’s embassy.

On Monday, Jordanian lawmakers unanimously called on the government to expel the Israeli ambassador in Amman and recall the Jordanian ambassador from Tel Aviv.