A Polish journalist who was probed by police for last year writing about her country’s complicity in the Holocaust announced Tuesday that the case against her had been closed.

Katarzyna Markusz vowed to keep reporting on Polish complicity in the Holocaust as well as what she said was “the widespread aversion of Poles toward Jews.”

“So one can write about Polish complicity in the Holocaust and the widespread aversion of Poles towards Jews,” she continued. “Good because I’m going to keep doing it. After all, the truth is most important.”

A group of Polish Jews are led away for deportation by German SS soldiers, in April/May 1943, during the destruction of the Warsaw Ghetto by German troops after an uprising in the Jewish quarter, 1943. (AP Photo)

Markusz, who runs the Jewish.pl website and writes for the Jewish Telegraphic Agency, was questioned earlier this month on suspicion that she violated Article 133 of the Polish constitution, which subjects those who “publicly insults the Nation or the Republic of Poland” to up to three years in prison.

An anonymous complaint was filed against Markusz, which led to her arrest, according to the Oko.press.

In October 2020, Markusz wrote in an article: “Will we live to see the day when the Polish authorities also admit that hostility toward Jews was widespread among Poles, and that Polish complicity in the Holocaust is a historical fact?”

“The steadfastness, hospitality, bravery, and nobility of Poles and, of course, the allegedly enormous help given to Jews during and immediately after the war, is one of those fictions that have been fed to us by Polish politicians for many decades,” she added, according to a translation from the Algemeiner news site.

Markusz told Oko.press after her questioning at a Warsaw police station that cops had asked her whether she had intended to “offend the Polish nation” with her article. She responded that this was not her intention.

The reporter added that she had been used to receiving hate mail, but that “this was the first time someone complained to the prosecutor’s office. I believe that such matters are a waste of taxpayers’ money.”

Speaking to the Haaretz newspaper about her interrogation, Markusz stood by what she had written. “I wrote the truth. There were Poles who were involved in the Holocaust. They betrayed their Jewish neighbors and sometimes even killed them. That’s a fact. It’s stupid that I should have to discuss this with the police and that someone could be offended by it. How can one be offended by the truth?”

“The Polish prosecution does not punish those for espousing anti-Semitic attitudes, but is willing to punish a journalist? It’s crazy!” she added.

Asked why she is so interested in Jewish Polish life, Markusz told Haaretz, “I am 100% Polish” — a response that seemed to imply that Jews are less Polish than their fellow Poles.

“I’m just really interested [in Polish Jewry]. That could be why the Polish right and Polish politicians don’t like me. There are always anti-Semitic comments [from them] on my Twitter, but I will not change. They will not scare me,” she added. 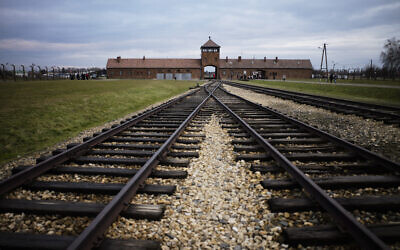 The railway tracks from where hundreds of thousands of people were directed to the gas chambers to be murdered inside the former Nazi death camp of Auschwitz Birkenau or Auschwitz II, in Oswiecim, Poland, on December 7, 2019. (Markus Schreiber/AP/File)

The probe had come ahead of a major verdict against two respected Polish historians of the Holocaust in a controversial defamation trial that had raised pointed questions about the freedom to research Poland’s troubled past.

The Warsaw District Court later ruled that Barbara Engelking and Jan Grabowski must issue an apology to a woman who claimed her deceased uncle had been slandered in a historical work they co-edited.

The researchers co-edited a book called “Night Without End” that documented cases of complicity of Catholic Poles in the genocide of Jews during the Nazi German occupation in World War II.

Jerusalem’s Yad Vashem Holocaust memorial condemned the ruling saying it was “deeply disturbed by its implications.”

The trial took place in a tense political climate, with critics accusing the nationalist government of attempting to whitewash Polish history and discourage academic inquiry into cases of collaboration.

In 2018, the Polish government adopted a law banning anyone from mentioning any responsibility of the Polish nation or state in crimes committed by Nazi Germany on Polish soil.

Poland was occupied by Nazi Germany during the war and its population subjected to mass murder and slave labor. While 3 million of the country’s 3.3 million Jews were murdered, so were more than 2 million mostly Christian Poles. Poles resisted the Nazis at home and abroad and never collaborated as a state with the Third Reich. Thousands of Poles have been recognized by Yad Vashem in Israel for risking their own lives to save Jews.

Yet amid the more than five years of occupation, there were also Poles who betrayed Jews to the Germans, or took active part in their persecution. The topic was taboo during the communist era and each new revelation of Polish wrongdoing in recent years has sparked a backlash.