WASHINGTON — Iranian-American journalist Masih Alinejad said Wednesday she was shocked by an Iranian plot to kidnap her from her New York home, as Tehran stiffly denied the allegations contained in a US Justice Department indictment.

The White House strongly condemned the plot, which came to light late Tuesday when the Justice Department unveiled charges against four Iranian intelligence agents, who had allegedly planned to seize the dissident journalist and smuggle her to Iran.

A dual US-Iranian citizen, Masih told CNN she was alerted by the FBI eight months ago that she was being watched and that her home was not safe.

They showed her intimate photographs of her home and family they said were taken by an investigator doing surveillance for the Iranians, to demonstrate that her home had been compromised.

She said she was moved to a series of safe houses while the FBI investigated the plot, which also involved a California-based Iranian who helped hire private investigators to follow her, according to the indictment.

“It’s unbelievable. I still cannot believe it that in New York, the Islamic Republic was allowed actually to threaten and follow me, an American-Iranian citizen,” she told CNN.

“This is not the first time the United States has engaged in creating such Hollywood scenarios,” the ISNA news agency quoted Khatibzadeh as saying.

“Of course, we expect such stories from America, whose short history is filled with assassinations, kidnappings and sabotage,” he said. 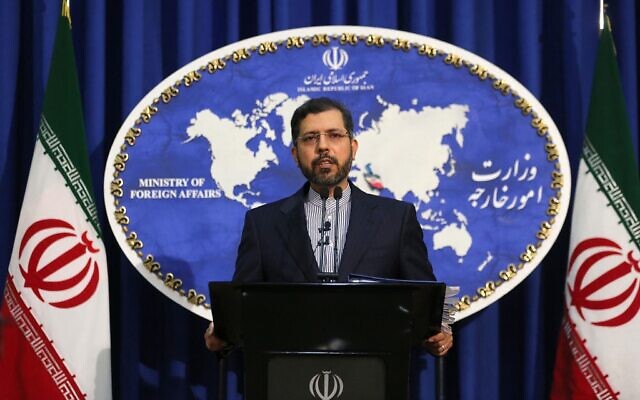 Tehran’s “attempt to silence the voices of those peacefully working to address the situation both inside of Iran and outside of Iran are appalling,” she said.

“We will forcefully defend US citizens and US interests.”

According to the indictment filed in New York federal court, the Iranian intelligence officers tried in 2018 to force Alinejad’s Iran-based relatives to lure her to a third country to be arrested and taken to Iran to be imprisoned.

When that failed, they hired US private investigators to surveil her during the past two years.

The Iranian agents researched possible ways to move her out of the United States, including hiring a “military-style” speedboat to whisk her from Manhattan.

They also researched routes to travel by sea to Venezuela, an Iranian ally.

The 44-year-old journalist left Iran in 2009, studied in Britain and worked for the US government-backed Voice of America’s Persian-language service.

Since 2014, Alinejad also has maintained a Facebook campaign, “My Stealthy Freedom,” to support Iranian women who don’t want to wear the hijab covering — required for women in the country.

Alinejad said Tehran has targeted dissidents in Europe, but not so much the United States.

She cited the case of Iranian dissident Ruhollah Zam, who was lured from France to a third country, kidnapped and taken to Iran in 2019, where he was later executed. 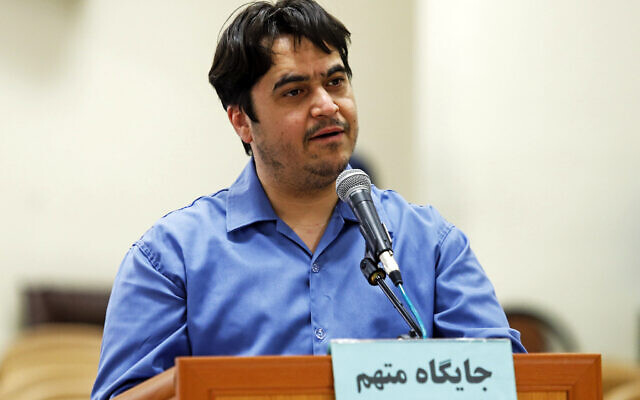 Journalist Ruhollah Zam speaks during his trial at the Revolutionary Court, in Tehran, Iran on June 2, 2020. (Ali Shirband/Mizan News Agency via AP)

Alinejad said she learned of the investigation after the FBI arrested one of the private investigators hired to surveil her.

After that, the FBI told Alinejad to continue her political activities on social media, without letting on that she was in a safe house, to see if Iranian intelligence would track her down, she said.

“The FBI was trying to find out whether they were going to follow me and find me in my new place, and they did,” she added.

“I’m not scared of being dead or being executed,” she said. “What scares me, that the whole world keeps silent about such a regime.”

Alinejad said she was “disappointed” the administration of US President Joe Biden has not taken stronger action against Iran, as it seeks to restore the joint agreement with world powers on limiting Tehran’s nuclear program in exchange for international sanctions relief.

Psaki said the nuclear talks would carry on.

“We will continue to pursue those talks, pursue the diplomatic path forward, which we think is in our interests, and continues to be constructive,” she told reporters.