The Justice Ministry is set to be left without a justice minister as of midnight Thursday as Prime Minister Benjamin Netanyahu prevents an appointment to the post, in a move precipitating chaos and confusion in the judiciary just days before his corruption trial is set to begin in earnest.

Blue and White party chair Benny Gantz, who also serves as defense minister, has served as interim justice minister for the past three months, but his term expires Thursday with the failure to appoint him as permanent minister.

Under the coalition deal between Netanyahu and Gantz — which remains in effect until a new government is sworn in following the election — the Justice Ministry is under the purview of Gantz’s bloc of the government. He can select who he wishes to head the portfolio, and Netanyahu has no say in the matter. However, Netanyahu can block a cabinet vote on such an appointment, which he has apparently been doing for months now.

Former justice minister Avi Nissenkorn, who resigned from the post in December when he split from Blue and White to join the now-defunct Israelis party, said Thursday that the lack of a permanent minister would have “tragic” consequences.

“The absence of a justice minister is a warning sign for Israeli democracy, a low point,” he told Army Radio.

Speaking Wednesday night, Gantz castigated Netanyahu for blocking the appointment and said he had written to the attorney general to ask whether the premier should be required to step down as prime minister over the decision.

The prime minister’s move to leave Israel without a justice minister represented a “clear instance of conflict of interest,” said Gantz, intimating that Netanyahu was interfering in the state legal establishment for personal reasons because he is on trial.

The evidentiary phase of Netanyahu’s trial for alleged bribery, fraud and breach of trust begins on Monday, with hearings scheduled to be held three times a week, Mondays through Wednesdays from 9 a.m. until 3:30 p.m.

Netanyahu, the first Israeli premier to be indicted while in office, denies any wrongdoing and has railed against the courts, prosecution and media for what he terms a “witch hunt.” He alleges the state prosecution, police, media and opposition are framing him in an attempted political coup.

Gantz suggested Wednesday that the failure to appoint a permanent justice minister could be part of an effort to impact the trial.

He said he had sent a letter to Attorney General Avichai Mandelblit asking him to examine Netanyahu’s capability to continue serving as prime minister under the circumstances.

He appealed to Mandelblit to compel Netanyahu to allow the appointment of a permanent justice minister. “I will not allow this violation of the rule of law,” Gantz said.

Last week, Mandelblit sent Netanyahu a letter warning that “a situation in which the Justice Ministry is left without a permanent minister will cause severe damage to the ministry’s work and the functioning of the government.” 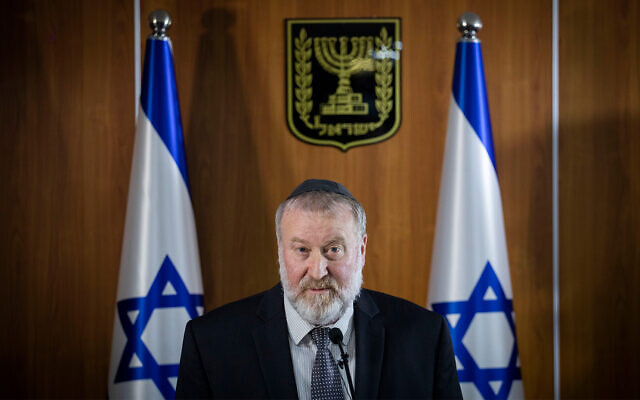 Netanyahu cannot serve as justice minister himself due to the criminal charges against him, and last week the High Court of Justice ruled that he must abide by conflict of interest rules laid out by Mandelblit preventing him from appointing senior law enforcement and justice officials.

Under Mandelblit’s arrangement, Netanyahu cannot be involved in any matters that affect witnesses or other defendants in his graft trial, or in legislation that would impact the legal proceedings against him.

In a bid to force Netanyahu’s hand, the Movement for Quality Government watchdog group filed a petition Thursday with the High Court calling on it to order a cabinet vote on a new justice minister.

The row over the justice minister saw Gantz call off a special cabinet meeting earlier this week that was set to approve a budget for further purchases of coronavirus vaccines. Netanyahu had refused to bring up for a vote Gantz’s choice for justice minister and in response, Gantz refused to convene the cabinet to discuss the vaccine acquisition.

Gantz, defending his actions, vowed that “we will not harm the health of citizens, neither regarding vaccines nor in any other way.”

“Blue and White will not prevent the consistent supply of vaccines to the country,” he said. “We already have stocks and need to continue to buy more, but in an organized way.”