Justice Minister Avi Nissenkorn will boycott Sunday’s cabinet meeting in protest of a deal that was reached between his Blue and White party and Likud on two senior appointments that he was not told about, and that failed to fill a key position in his own ministry, Hebrew media reported.

It was the latest indication that tensions in the unity government are also straining the seams of Blue and White, which is led by Defense Minister Benny Gantz.

Nissenkorn will join Communications Minister Yoaz Hendel in sitting out the meeting.

The cabinet is slated to vote Sunday on the appointment of a new accountant general at the Likud-run Finance Ministry and a director-general at the office of the alternate prime minister.

Gantz holds the post of alternate prime minister under a unity government deal. He is slated to trade places with Prime Minister Benjamin Netanyahu in November 2021, though few observers believe the government will last that long.

An agreement on filling the two posts was reportedly reached by Gantz and Netanyahu in furtive talks kept secret from top Blue and White lawmakers, including Nissenkorn, whose own ministry remains without an appointed director.

Nissenkorn was applauded by opposition leader MK Yair Lapid, who tweeted that boycotting the cabinet was a move “based on values.”

The appointments agreed between Netanyahu and Gantz were “disgraceful,” Lapid said.

“Instead of worrying about education, health and the economy, Ganz arranges fabricated jobs in nonexistent offices for his friends,” he wrote, apparently referring to the position of alternative prime minister, which had been specifically created for Gantz.

A television report Saturday said that Gantz hid from two senior ministers in his Blue and White party an agreement he reached with Netanyahu on senior appointments that failed to secure the key party demand for a Justice Ministry appointment. Earlier in the week Blue and White had denied that any such agreement had been reached.

According to Channel 12 news, Nissenkorn and Foreign Minister Gabi Ashkenazi, Gantz’s senior partners in Blue and White, only learned about the agreement when the agenda for the cabinet meeting was published.

The deal will not include the approval of a new director-general at the Justice Ministry, a central Blue and White demand  that has long been blocked by Netanyahu, hobbling the ministry’s activity.

Nissenkorn announced his pick for director-general months ago, but the Prime Minister’s Office has so far refused to bring the matter to a cabinet vote, with Netanyahu having issued a de facto freeze on all appointments of senior officials in Blue and White-controlled ministries — especially the Justice Ministry. Gantz has responded by refusing to allow a cabinet vote on appointments in Likud-led ministries such as health and finance.

The report said Blue and White officials were angry and disappointed by the deal, feeling that Gantz caved to Netanyahu on the matter. It did not cite a source.

Lawmakers were also reported to be concerned that the agreement may be part of a broader deal taking shape that would see Gantz agree to further delay the passage of a state budget — providing Netanyahu with an opportunity to create a crisis over the budget down the road and trigger elections at a time more politically convenient for him.

Communications Minister Yoaz Hendel, who is part of Gantz’s Blue and White-led coalition bloc, will also forgo participation in Sunday’s cabinet meeting in protest of the appointments deal, according to Hebrew media. Hendel told fellow party members that the meeting agenda is “irrelevant,” Channel 12 reported. 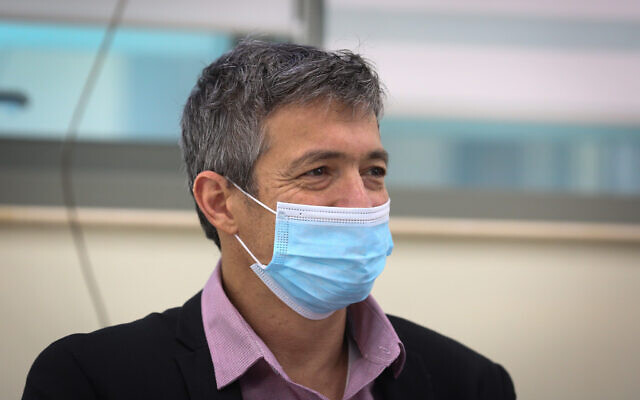 As part of their coalition agreement, Likud and Blue and White agreed to put off any senior nominations that they were likely to clash over. However, at the start of October, Gantz said it was time to end the “chaos” in the government and fill senior law enforcement posts that have long been manned by temporary stopgaps.

Last Monday, Attorney General Mandelblit told the High Court of Justice he believed the state must explain why it has so far failed to appoint a permanent director-general to the Justice Ministry. He said that with no concrete justification given for the failure to move the process forward, he “believes there is no choice” but to subpoena state representatives to respond.

Responding to Mandelblit’s Monday letter, Blue and White said that Gantz had instructed Nissenkorn “to speed up the process of appointing a state attorney and bring it to the government for approval as soon as possible.” 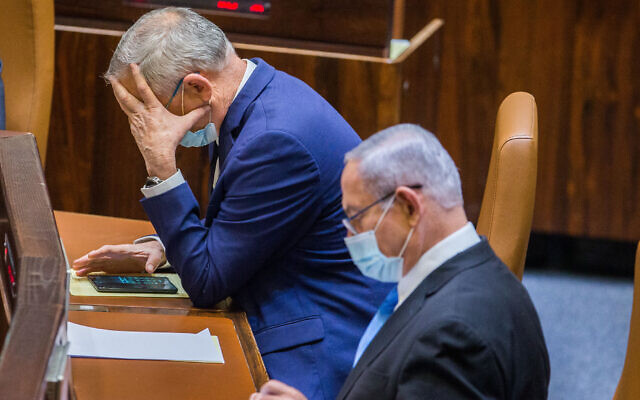 Gantz is said to be under pressure from within his own party to pull out of the unity government amid frequent disputes between Likud and Blue and White that have hampered progress on state affairs. Gantz has reportedly admitted to close confidants that he doesn’t believe Netanyahu will ever hand over power, and some party lawmakers are said to be threatening to split off and form their own Knesset faction in the opposition.

The government must pass a state budget by December 23 and failure to do so will automatically trigger elections. Critics believe Netanyahu is engineering an ongoing dispute with Blue and White over the budget that has so far prevented it being passed despite a deadline extension, as he would rather hold elections in light of recent, favorable polls. Should elections be called, they would be the fourth within two years.