The Jewish National Fund’s board of directors is expected to approve the purchase of land in the West Bank on Sunday, including in areas with isolated settlements, the Haaretz daily reported.

In February, the Jewish National Fund (KKL-JNF) voted to allocate NIS 38 million ($11.58 million) for the purchase of land in the West Bank. The controversial vote indicated a policy change — KKL-JNF would take operations beyond the Green Line to another level, purchasing land for the purpose of expanding settlements.

The motion was passed by a single vote.

The February decision stipulated that there would be another conversation to hash out the details of the purchase in order to address which exact areas would be bought.

At the time it specified that there would be no purchases in the districts of the Palestinian cities Nablus and Jenin — areas with very few Jewish settlements. In the current proposal, this note has been omitted, Wednesday’s report said.

The proposed resolution is based on the opinion of retired judge Yoseph Elon, which stated that KKL-JNF can operate in the territories to promote communal, environmental, and educational projects.

Centrist and leftist factions on the KKL-JNF’s board of directors have submitted a counter-opinion by Shachar Ben-Meir, which contests Elon’s judgment. Both opinions focus on a sentence in the organization’s Memorandum of Association, which allows KKL-JNF to acquire land “in any area under the jurisdiction of the Government of Israel,” the report said.

If the resolution is passed on Sunday, it will move to the KKL-JNF board of directors for final approval on April 22.

According to the proposal, KKL-JNF will reportedly purchase only private land, with a preference for land where settlements already exist, or that allows for the expansion of existing settlements.

After the February vote, the left-wing Meretz faction said it would be filing for a repeat vote given the close results. 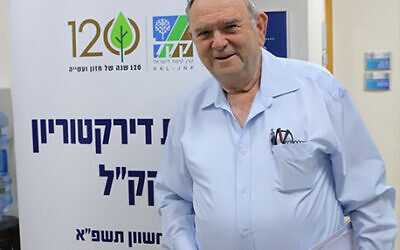 A group of board members representing left-leaning factions subsequently filed a petition demanding that the vote be annulled. They cited malpractice by KKL-JNF chairman Avi Duvdevani, claiming he muted certain members on the Zoom meeting and prevented others from answering questions, and then rushed the vote. In addition, the petitioners claimed that legal opinions criticizing KKL-JNF’s covert conduct beyond the Green Line were hidden from board members.

KKL-JNF, established in 1901 to buy and develop land for Jewish settlement and best known for the hundreds of millions of trees it has planted throughout Israel, serves as the Jewish people’s custodian for some 15 percent of the land in the country, the management of which is carried out by the Israel Lands Authority.

An organization officially registered as a company for the benefit of the public, KKL-JNF works in the fields of forestry, water, education, community development, tourism, and research and development. The World Zionist Organization is its parent body.