AP — Generations of Jews have dropped spare change into the iconic blue boxes of the Jewish National Fund, a 120-year-old Zionist organization that acquires land, plants trees and carries out development projects in the Holy Land.

But the Israeli group, known by its Hebrew acronym KKL, is now considering formally expanding its activities into the West Bank. That has sparked fierce opposition from left-leaning Jewish groups in the United States, deepening a rift with the right-wing Israeli government.

The debate has drawn attention to the fact that the KKL, which owns more than a tenth of all the land in Israel, has been quietly operating in the West Bank for decades, building and expanding settlements that most of the international community considers a violation of international law.

A separate New York-based organization, also known as the Jewish National Fund, does not take a position on the settlements and mostly operates within Israel.

The controversy erupted earlier this month when the Axios news website reported that the KKL was considering a proposal to openly fund land purchases from Palestinians in the West Bank. The move could potentially channel hundreds of millions of dollars into the expansion of settlements, some of them far beyond the Green Line.

Israel captured the West Bank in the 1967 war, and the Palestinians want it to form the main part of their future state. They view the settlements — which house nearly 500,000 Israelis — as the main obstacle to a two-state solution to the conflict.

Israel views the West Bank as the biblical heartland of the Jewish people and says any partition should be negotiated in peace talks, which have been largely moribund for more than a decade.

Illustrative: Construction work in the Dagan neighborhood of the settlement of Efrat, in the West Bank on July 22, 2019. (Gershon Elinson/Flash90)

The new proposal would need to be approved by the KKL’s board of directors, which includes representatives from several Jewish organizations and is not expected to decide before the country holds nationwide elections on March 23.

“Throughout the years and till this very day, KKL-JNF has been operating in all parts of the Land of Israel, including Judea and Samaria,” it said, using the biblical name of the West Bank. “At this stage, there is no intention of opening up a new area in Judea and Samaria.”

It added that all projects are confirmed with donors in advance, suggesting that funds intended for projects inside Israel would not be diverted to the West Bank

But Peace Now, an Israeli anti-settlement watchdog, says KKL has been quietly operating in the West Bank for decades, acquiring at least 65,000 dunams (16,000 acres) of land for settlements, mainly through a subsidiary.

“This has happened before and so this isn’t a sea change,” Peace Now spokesman Brian Reeves said. “But this would be the first time that they are officially endorsing this in the open, the idea of purchasing land in the West Bank, and essentially saying ‘we don’t agree with international law, or that there’s occupation, or that the two-state solution matters.’”

Palestinians view the sale of land to settlers as a betrayal of their national cause, so such transactions are usually carried out in secret or through middlemen, opening them up to allegations of fraud. In some cases, they result in the eviction of Palestinian families who say they never sold their property.

While the settlements enjoy broad though far from unanimous support within Israel, they have come to be seen as an obstacle to peace by many Jews in the West, who are also at odds with the Israeli government on religious matters. Most American Jews belong to the more liberal streams of Judaism and feel alienated by Israel’s ultra-Orthodox religious authorities, who question their faith and practices. 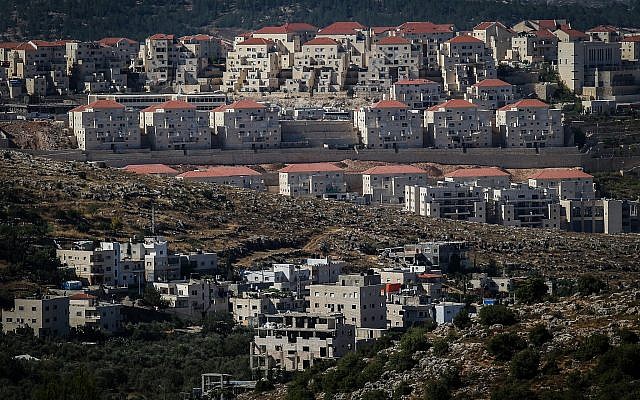 Illustrative photo of the ultra-Orthodox West Bank settlement of Beitar Illit, and the Arab village of Wadi Fukin below, June 17, 2015. (Nati Shohat/Flash90)

Rabbi Rick Jacobs, the head of the Union for Reform Judaism, the largest Jewish movement in North America, says the KKL’s shift stems from recent elections at the World Zionist Congress that brought to power right-wing leaders more closely aligned with the Israeli government.

His group and others that are opposed to settlements denounced the KKL’s proposal and have vowed to oppose it when the board meets, but it’s unclear whether they have enough votes. Jacobs is concerned the move could tar the KKL for many in the West or spark tensions with the new US administration, which is also opposed to settlement expansion.

He acknowledged the KKL has operated in the West Bank in the past, but says its activities dramatically dropped off over the last two decades before resuming and accelerating in secret in recent years, prompting opposition from the URJ and other groups.

“We basically blew the whistle and said wait a minute, there’s a whole lot of land purchasing going on under the table, under the radar without oversight, and frankly, without even the formal permission to do so,” he said. 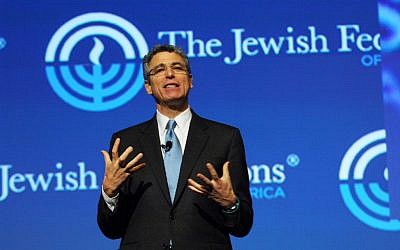 “Here in North America, the majority of Jews are opposed to the proliferation of the settlement enterprise,” he added. “That’s something that American Jews feel very strongly about.”

The US-based JNF is a separate entity with its own board and its own offices in New York and Jerusalem. CEO Russell Robinson said it doesn’t involve itself in politics and focuses on projects in the Negev and Galilee regions of Israel.

The US JNF contracts out forestry and reservoir-building to the KKL, in what Robinson refers to as a “vendor service.” It has also funded some small projects in the occupied territories, including a heritage museum in the Gush Etzion settlement bloc.

Robinson dismisses the infighting within the major Zionist organizations and says it’s had no impact on his group’s fundraising. But Jacobs says Israelis should be concerned about the fraying relations between their hawkish government and their allies abroad.

“American Jews are very involved in the political life of the United States,” he said. “We are working overtime to bridge the differences and to establish more commonality, but we’re not going to forsake our core commitments to do so.”