The Knesset on Wednesday approved the reopening of zoos, restaurants, large outdoor strip malls and other attractions inside the so-called “tourist islands” in Eilat and the Dead Sea.

The approval came during a Constitution, Law and Justice Committee debate on the latest easing of restrictions approved by the cabinet.

The panel’s chairman, Shas MK Yaakov Asher, also said he hoped ministers would also approve an amendment to expand the cap on in-store shoppers around the country to beyond four customers. He said health officials were weighing a compromise that would raise the restriction for stores depending on their size.

The session was held hours after legislation to designate the Red Sea resort city of Eilat and hotels in the Ein Bokek area of the southern Dead Sea as “special tourist islands” went into effect.

Tourist entry to those areas will be allowed for those who underwent a coronavirus test during the preceding 72 hours and got a negative result. Residents of Eilat who wish to enter or reenter the city will have to present a test result from the preceding week or undergo a free, quick test at a facility that will be set up at the entrance to the city.

An aerial view taken on September 4, 2020, shows people at the shores of the Dead Sea at the resort district of Ein Bokek as Israel experienced its hottest recorded temperatures. (AHMAD GHARABLI / AFP)

While the legislation allows Eilat and Dead Sea resorts to partially reopen, other tourist sites across the country will remain closed for the time being.

Israel’s tourism industry has been brought to its knees by the coronavirus, though it enjoyed a respite in the spring and summer as locals flooded Israeli hotels instead of traveling abroad. However, hotels were shut back down as part of a nationwide lockdown imposed in mid-September, which remains partially in place.

Both Eilat and the Dead Sea, which are heavily dependent on tourism, have seen unemployment skyrocket with hotels shut as part of a nationwide lockdown. Unemployment in Eilat remains over 40 percent, well above the national average, according to Walla news.

The latest Knesset approval came as the Health Ministry released updated coronavirus figures Wednesday night, which showed 426 new coronavirus cases had been diagnosed since the start of the day, with some 1.7% of tests returning positive.

The death toll rose to 2,738, with one new casualty reported Wednesday.

There were 308 Israelis in serious condition, a drop of 14 from Wednesday’s tally.

Health Ministry officials are deeply frustrated by the new steps easing restrictions, Channel 12 reported Tuesday, and are warning that a surge in infections will force their reversal within two or three weeks. 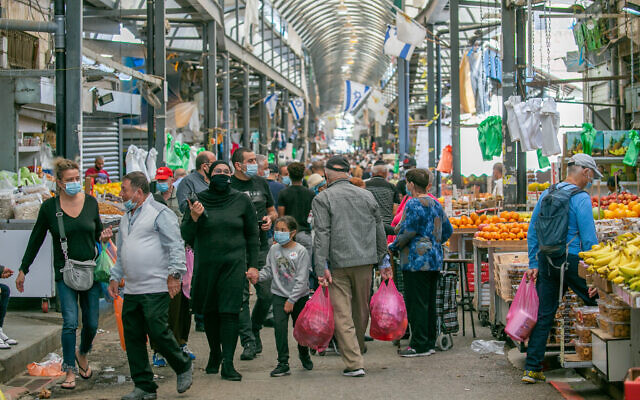 Israelis shop at the newly opened market in Ramle on November 18, 2020. (Yossi Aloni/Flash90)

Officials also decried the fact that, contrary to plans, the government was not waiting two weeks between phases of reopening to ensure that certain steps weren’t causing infections to spike.

Unnamed sources told Channel 12 that although the number of people infected with the virus was not currently worryingly high, there were concerns that further easing of restrictions could lead to a loss of control over the outbreak.

Health Ministry officials have reportedly expressed outrage that restrictions are being eased even as the basic reproduction rate — the average number of people each virus carrier infects — has topped 1.0, when 0.8 had been defined as the threshold beyond which restrictions would stop being eased.

On Wednesday morning, Israel’s reproduction rate stood at a worrying 1.09, according to the Health Ministry, a slight increase from a day earlier.