JTA — If all goes well for Jacob Steinmetz, he could run into a kosher food problem in the near future.

Steinmetz, a 17-year-old pitcher from suburban New York with a blazing fastball, made history on Monday as the first Orthodox Jewish baseball player to be drafted by a major league team. The Arizona Diamondbacks chose the Long Island native with the 77th overall pick, far higher than expected.

If the 6-foot-5, 220-pounder chooses to start his professional career immediately, foregoing a college scholarship to Fordham, he could eventually find himself on a minor league team “in the middle of nowhere, as most minor leagues teams are,” Steinmetz acknowledged to the Jewish Telegraphic Agency in a phone interview Wednesday.

That’s where his religious lifestyle could run into obstacles — places without plentiful kosher food or ways to keep up his observance of Shabbat rules.

“For food, I bring stuff. Now, with a lot of the attention I’ve been getting, it might be a little easier to find different places and different spots,” he said.

A 2020 survey by Arizona State University has the number of Jews in the Phoenix metro area approaching 100,000.

“I know Arizona has a big Jewish community, so there’s going to [be] a bunch of kosher food,” he said. “Once I start moving up … the plan is to either ship food there or bring my own food or however I do that. It shouldn’t be that difficult for me.”

(Vegan food, considered to be kosher by many, is not an option for now. “I’ve never tried it honestly,” Steinmetz said.)

Jacob Steinmetz is drafted for the MLB (MLB.com via JTA)

Fans are both excited for Steinmetz and Elie Kligman, a fellow Orthodox teenager drafted in a much later round on Tuesday, and interested in how they can maintain their religious observance. Of course there’s the food, but major league teams play almost every day and on weekends, including through the hours of the Jewish Sabbath.

Most major league pitchers get days of rest between appearances, so Steinmetz could stagger his schedule accordingly. (Kligman has recently focused on becoming a catcher, a physically demanding position that also usually requires at least one day off a week and often more.)

Steinmetz was upfront with prospective employers before the draft about his religious beliefs and how they would affect his availability to play. He was raised Modern Orthodox, and his family are members of Young Israel of Woodmere in Long Island. His mother, Sima, is an accountant, and his father, Elliot, is a lawyer as well as the men’s basketball coach of Yeshiva University — a team that hasn’t lost a game since 2019.

Years ago, the family decided to allow Jacob to pitch on the Sabbath, as long as he can walk to the ballpark. While traveling, he will choose hotels close enough to his games.

“The plan is to keep doing what I’ve been doing my whole life, where I’ve stayed nearby to the field and walk to the game on those days,” Steinmetz said.

Has there been any criticism from his Orthodox community for pitching on Shabbat?

“A little bit. No one really says it straight to me, I guess they just keep it to themselves,” he said. “No one will say it outright. Everyone’s pretty supportive of it here.”

The Diamondbacks director of scouting, Deric Ladnier, told reporters on Monday that the National League Western Division team was thrilled to select Steinmetz, who he called “very candid” about his Jewish lifestyle, with their third-round pick.

“We loved his stuff, big arm, what we felt was one of the better curveballs in the draft. There were some things with regards to his religious background being an Orthodox Jew, we’re going to respect that. He follows that strictly,” Ladnier said. “As an organization, we’ll have to work with his schedule to make sure he can maintain his schedule with his religion.

Here’s the tv clip of Jacob Steinmetz being picked 77th overall in the MLB Draft by the Arizona Diamondbacks.

Steinmetz, a pitcher from Long Island, has the opportunity to be the first Orthodox Jewish MLB player.

“We felt like the ability for us to make the adjustments for his schedule will be something that will be probably unique to this organization. We just felt like it’s somebody we want in the organization, and obviously being 17 years old, with the upside, we’re very pleased to get him there.”

Partly because of how high he was drafted, and the lucrative contract that could come from that, Steinmetz intends to skip college and head straight to a team training camp in Arizona. From there he could be assigned to a summer league or a low Class A league — the first rung of the minor leagues’ three levels (A, AA, AAA).

“Probably three, four years,” Steinmetz said about his hopeful timeline to the big leagues. “One-two’s probably a little quick. I’m still 17, so I’d be 19 at that point and it’s a little early. If it happens, great, but realistically three or four.”

Steinmetz, who grew up a Yankees fan, admittedly wasn’t a big-time baseball prospect until recently, and even said a major league career “became a realistic dream only a couple of months back.” He graduated in June from Long Island’s Hebrew Academy of the Five Towns and Rockaway, where sports were big, but baseball wasn’t — mainly basketball and hockey. Steinmetz was a good enough basketball player that an option at one point was to attend Yeshiva and play for his father. But his first love was baseball.

He said his father, who played basketball at Yeshiva 20 years ago and took the reins as head coach in 2014, understood when his son told him he wanted to focus on baseball.

“Baseball was always my go-to, but I always knew if baseball didn’t work out, if I didn’t enjoy it anymore, that I could hopefully play basketball for him,” Steinmetz said.

He said a growth spurt and an increase in speed on his fastball — now timed in the mid- to upper 90 miles per hour — was what got him thinking that maybe a big league career was possible.

“I was always OK, I was never anything like crazy. I was never at the top of my class, until probably 10th or 11th grade. I had a growth spurt and started filling out my body, working out,” Steinmetz said. “I had a velo [velocity] jump, and then once I started throwing harder, everything else kind of came along.”

In March, he went to Florida to the ELEV8 Baseball Academy, where scouts really began to take notice. Steinmetz was listed as high as the 121st best player in the draft, which began on July 11. If form had held, he would’ve been picked late in the fourth round. Going a round earlier didn’t totally catch him by surprise, however.

“If you asked me that question half a year ago I’d say yeah, but more recently not really, I kind of saw this coming as we got closer. I kinda knew what range I was going to go in,” he said.

Family and friends erupted in celebration at his home when he learned the news in a call on draft night.

Steinmetz never had any doubts that his lifestyle could work in the major leagues, and he is looking forward to the challenge of trying to be the first Orthodox player in the majors.

“I always thought to myself that why can’t I be the first? There’s no reason why not,” he said.

Though he hasn’t met Kligman, a Las Vegas high schooler who was drafted in the 20th round by the Washington Nationals, Steinmetz said they have been in touch.

“We obviously just heard about each other recently, when all this stuff started coming out, so we got in contact,” he said.

It is possible that within the next few years, before they reach the majors, both Steinmetz and Kligman could be playing for Team Israel — now headed to Tokyo for its first Olympics appearance — in international competition. Both have said they’d be honored to get that call. 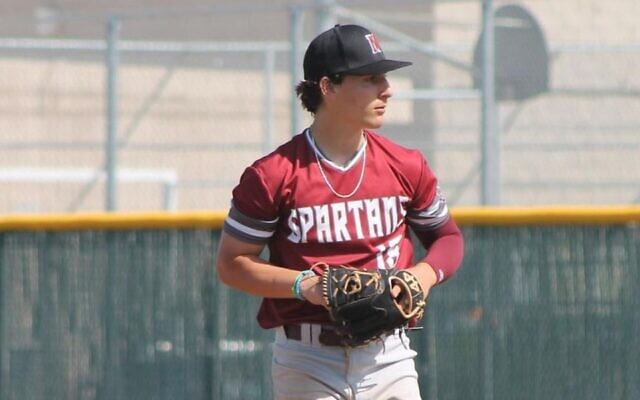 Steinmetz is aware of past Jewish greats like Sandy Koufax, and his famous choice to skip pitching on Yom Kippur in the World Series. Asked if he would decline to pitch in similar circumstances, Steinmetz said it’s too far in the future to even think about.