The Washington, DC-based kosher chef had resisted buying one of the electronic multicookers, mostly because she did not feel like making space for it in her appliance-crowded kitchen.

When she finally gave in, and discovered the game-changing methods of the combined pressure cooker and slow cooker, Shoyer was hooked. The appliance and how to put it to good use became the topic of her latest cookbook, “Instant Pot Kosher Cookbook” (Sterling Books).

Shoyer had cooked just three recipes — split pea soup, rice and short ribs — before marveling at the benefits of the Canadian-made multicooker, which, like a stovetop pressure cooker, cooks dishes quickly.

“Meat that usually takes two and a half hours was so tender,” said Shoyer. “I cook everything with four buttons” — there are a total of six on an Instant Pot — “and after using it one time, anyone is an expert.”

When Shoyer then discovered the Kosher Instant Pot Facebook group (now with 14,600 members) commenting about Instant Pot recipes and kosher substitutions, she knew there was a built-in audience for a kosher instant pot cookbook.

“There are so many cookbooks out in the world, I was not going to write one unless people needed it,” said Shoyer. “Even the kosher market is pretty saturated.”

But she had clearly discovered a new niche. The “Instant Pot Kosher Cookbook” sold out its first printing in preorders, and a second printing was recently completed.

“It’s clearly filling a need,” said Shoyer, who based the book’s 100 new recipes on traditional kosher standards and Israeli favorites. She is thinking about offering another version of the cookbook with stovetop alternatives for each recipe, for those who do not own Instant Pots.

The multicooker was introduced in 2009, and took home kitchens by storm over the next decade. On Black Friday 2016, some 215,000 units sold on Amazon, elevating the appliance to cult status. It remains one of the top sellers on Amazon, where most Instant Pots are sold, including to Israelis, who must pay import taxes, depending on the model.

The multicooker was created by Robert Wang, a computer scientist and home cook in Ottowa, Ontario. Wang took advantage of being downsized at his high-tech job to invent a smarter and healthier multicooker than those already on the market.

The pot combines pressure cooking and slow cooking, offering home cooks a new way to cook rice and make yogurt, brown vegetables for a stew, and steam vegetables, all in the same vessel. The Instant Pot’s army of devotees swear by the appliance, which uses high-tech sensors to self-regulate its temperature.

“This pot gives you a whole other burner, and it replaces a lot of pots and pans for a 25-year-old living in an apartment with a small kitchen,” said Shoyer.

The concept of Instant Pot cooking has changed family meals for busy home cooks, particularly during the last year of the pandemic, when many people were cooking more, and did not necessarily have the patience to fuss around in the kitchen. 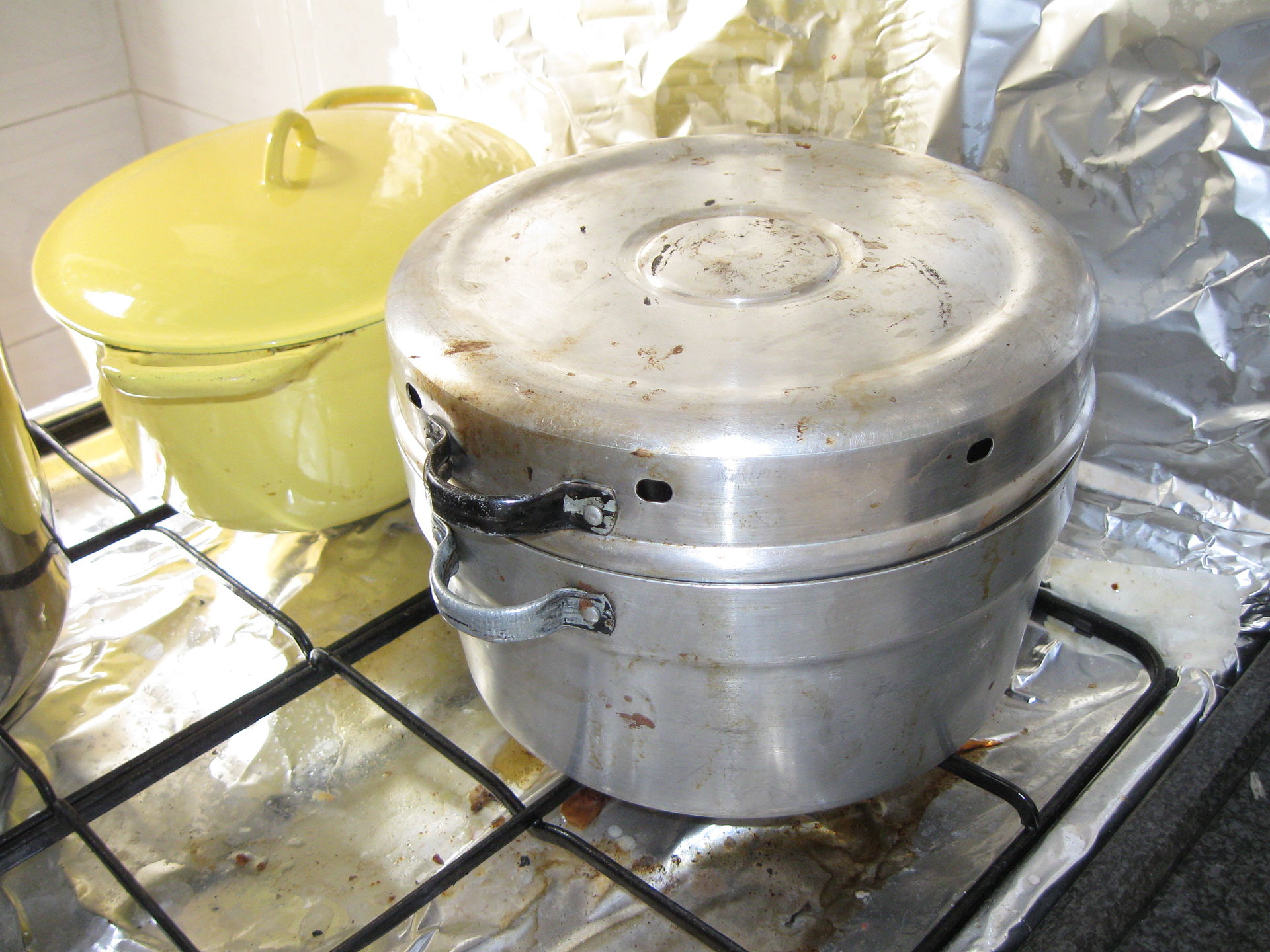 The Israeli Wonder Pot, a Bundt-shaped pan used for cooking nearly anything on the stovetop. (courtesy, Yoninah/CC BY-SA 3.0)

Shoyer likened the experience of cooking traditional kosher favorites in the Instant Pot to that of Jewish immigrants to Israel or the US, who did not necessarily always have the pots and pans they needed, and had to figure out how to make their traditional foods in the devices they discovered in their new homelands.

Israelis long used the Wonder Pot, a locally-invented Bundt pan-shaped pot that can cook kugels and cakes, rice, potatoes, and chicken on the stovetop, a viable alternative when many people had no oven, during the country’s austere years of the 1950s and 1960s. The three-part aluminum pot is still available in some ultra-Orthodox neighborhoods, used by some who do not have a second oven for Passover and use the Wonder Pot as an alternative.

For today’s kosher cook, the Instant Pot, which speeds up the cooking process, is a boon for those making the equivalent of Thanksgiving dinner every Friday night, said Shoyer.

“Our culture has this need to stretch our food as far as possible,” she said. “You can take a small amount of meat and stretch it with ingredients to feed a lot of people, which is good because we’re always cooking at volume.”

At its core, said Shoyer, the electronic pot works best for soups and stews. Her audience of kosher home cooks prepare many of those kinds of dishes throughout the year, especially for Shabbat and holidays. 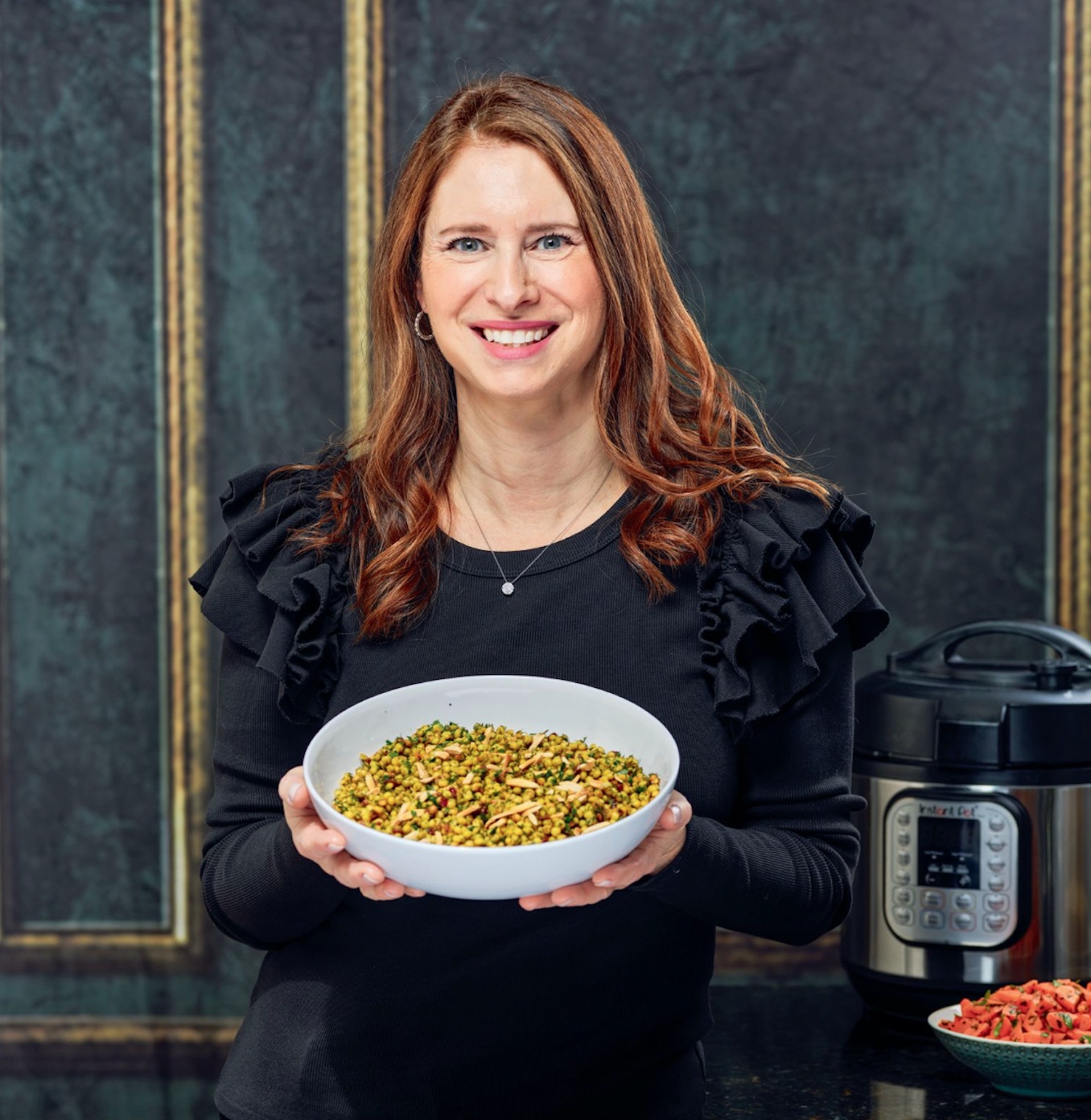 “Who else is making soup 52 weeks a year,” she asked, referring to the typical first course at many Shabbat dinners.

Her Instant Pot chicken soup is a Friday night classic, said Shoyer, rich and complex, from the browned vegetables and chicken.

The book’s cover recipe, a beet and quinoa salad that is gluten free and can be a vegan main course or side dish, was inspired by a similar salad in a Haifa restaurant she visited a few years ago.

“It’s pink, it’s gorgeous, and you put the beets and quinoa in the pot, bring it to pressure, and then release it naturally and it’s done,” she said.

The Instant Pot can also cook desserts. Shoyer included several recipes that are made in a water bath, such as a malabi flan and a cheesecake that includes an orange caramel sauce.

Among Shoyer’s favorite recipes for the Instant Pot is spaghetti with flanken bolognese, a perfect weekday meal with everything, spaghetti included, cooked in the electronic cooker.

“With every recipe, I try to stand in the shoes of a person in kitchen, how much time they’re willing to stand in the kitchen,” she said, explaining that she aims for recipes that use a small number of mixing bowls and measuring cups. “I try to respect the home cook.” 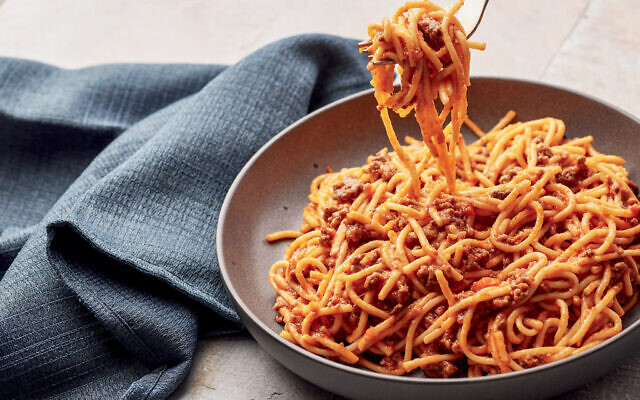 Hands on time: 21 minutes
Time to pressure: 15 minutes
Cook time: 15 minutes
Buttons to use: Sauté and Pressure
Release type: Quick release
Advance prep: May be made 2 days in advance

Press Sauté and when the display reads “Hot,” add 2 tablespoons of the oil, onions and garlic to the inner pot. Cook for 3 minutes, stirring occasionally. Add the ground beef and flanken and cook to brown the meat for 5 minutes, pressing the meat pieces into the bottom of the pan, and stirring occasionally to brown on all sides. Add the wine and cook for 3 minutes to cook off some of the wine. Add the pepper. Press Cancel.

Secure the lid, ensuring that the steam release handle is in the Sealing position. Press the Pressure button and set the cooking time for 15 minutes.

When the cooking time is complete, turn the steam release handle to the Venting position to release any remaining pressure. Press Cancel and remove the lid.

Use two forks to separate the spaghetti strands and mix the pasta and meat together. Taste the pasta. If it is a bit hard, return the cover to the pot and let warm fort 5 minutes. Stir again and serve. Add more salt and pepper if needed.