LOS ANGELES (AFP) — Long before the world had ever heard of Paris Hilton or Kim Kardashian, Angelyne had cornered the market in being famous for being famous.

Now, the “Billboard Queen” of Los Angeles is on the ballot when Californians vote Tuesday on recalling their governor.

And with a manifesto that includes an annual “Bubble Bath Day,” a masquerade ball and rehab for politicians, it’s a candidacy that could only happen in Hollywood — but not, possibly, an entirely serious one.

“I’m already queen of the universe. Governor of California would be a step down,” she sighs.

Angelyne and her bright pink Corvette are a garish part of the fabric of Los Angeles. For decades, she has draped herself suggestively on billboards, a cursive “Angelyne” the only lettering. Her heavy make-up, platinum-blonde hair and low-cut tops are guaranteed to make the passerby stop and look. But what, exactly, is she advertising?

“Everybody would say, ‘Oh, you’re so gorgeous. You’re so beautiful. Somebody will do something with you,’” she told AFP. “Nobody did… So I just decided to do it myself.”

“As a teenager, I did beauty contests… Then I was in a rock band. And then I started putting up billboards,” she recalled. “Then I just became famous internationally.”

Entertainment bible IMDb lists dozens of credits for Angelyne’s screen appearances, some bit parts as an actress, but many simply as “herself,” the kind of cameo usually afforded to sport stars or musicians.

Angelyne insists her status as professional celebrity has foundations — unlike younger pretenders. Paris Hilton, she says “doesn’t do anything. The Kardashians don’t do anything.”

“I do something. I paint, I sing, I dance, I produce. And I add to the culture of the world. What do they do? Not to put them down. I did start that.”

Quite where it all started — in the official narrative — is vague. Various iterations of her story cast her as a Los Angeles implant, one of thousands of hopefuls who come to Hollywood from small-town America. No, she says; she is from California. Where in California? “Just California.”

“I have a PhD in chemistry, and I wanted to be a chemist, but somehow… I got pushed into show business.” Details about the doctorate — where, what was the thesis — evaporate.

A 2017 profile in The Hollywood Reporter says she was born Ronia Goldberg in Poland in 1950 to Jewish survivors of Nazi concentration camps. The family moved to Israel and lived in an ultra-Orthodox community until their 1959 emigration to the United States.

After an adolescence in an unremarkable Los Angeles suburb, Ronia — Renee, by then — was briefly married to businessman Michael Strauss. Years after their split, he returned to Los Angeles to find his ex-wife transformed.

“I hooked up with Renee again, and she was Angelyne,” Strauss told The Hollywood Reporter. “All of a sudden, big boobs, blond hair, this voice — the voice used to make me nuts. It didn’t compute with who I’d known she was.” 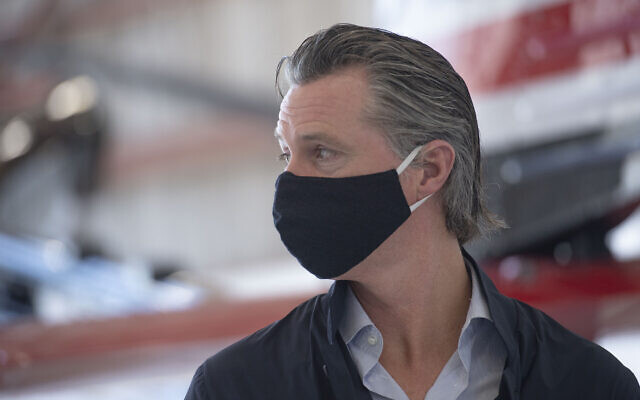 Her latest attempt to make it big is as one of dozens of candidates vying to unseat California Governor Gavin Newsom. The two-part vote asks firstly if Newsom should be recalled; anything more than 50% triggers the question of who replaces him. Whoever gets the most votes takes charge of the world’s fifth largest economy.

The curious voting structure has generated a raft of non-traditional candidates, including reality TV star Caitlyn Jenner, a self-described shaman, and a cannabis consultant. Pollsters say none of them are likely to win. But California has form: actor Arnold Schwarzenegger parlayed the 2003 recall into governorship.

Angelyne — who also ran last time around — has mounted a less than arduous effort in 2021. “Do I think I’m going to win? I don’t know. I’m already winning. I don’t want an office job.”

In the meantime, there is the glare of media attention, and the chance to direct supporters to her website — or the trunk of her car — where she hawks “Angelyne for Governor” T-shirts at $100 each.

Interview requests are met with gift demands, including perfume, champagne and “pink and leopard panties.” AFP declined to offer any presents.

If the Hollywood Reporter profile is correct — and she won’t say — Angelyne will be 71 shortly after Tuesday’s vote.

But as she lounges on the hood of her Corvette on a sunny Los Angeles afternoon, Angelyne insists her personal juggernaut will roll on regardless.

“I do what I want to do. A person cannot be doing what they don’t love to do. That’s my whole thing.”