Last updated on 2 hours ago2 hours ago.From the section Scotland

The dust has settled. The boogying has subsided. The long wait until Euro 2020 can begin for Scotland.

A rollercoaster international break has finally come to a shuddering end. We’ve had the euphoric high of ending a run stretching back to 1998 without qualification for a major tournament – and also the familiar low of coming up short against both Slovakia and Israel in the Nations League.

The reality of where the Scotland national team are at right now is probably somewhere in the middle, but how far away from a credible assault on the European Championship is Steve Clarke’s side?

In the wake of the anti-climactic end to the Nations League campaign, head coach Clarke admitted his side are nowhere near the finished article and have to be better.

But which area of the team is most in need of improvement?

For all Scotland’s confidence and control of the ball in midfield and at the back, scoring goals continues to be a problem.

In the eight games played in 2020, only six goals have been netted. Lyndon Dykes has added a different dimension up front, but taking chances, rather than creating them, has been a thorn in Scotland’s side in their last two matches.

In those defeats, 15 shots have been blasted on target, but only five have found their mark. None have gone in.

“This is always going to be a problem,” former Scotland manager Craig Levein told BBC Sportsound. 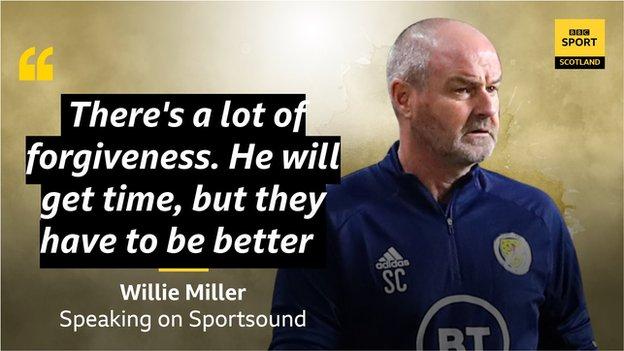 Time to recharge and regroup?

Let’s be honest, the players were knackered in Netanya. A gruelling triple-header – and a well-deserved and raucous night of partying in Serbia – took its toll as Clarke’s men gave their all but couldn’t pull off another landmark result.

But they will be refreshed and raring to go for next summer’s Euros extravaganza. And a couple of key additions – wingers James Forrest and Ryan Fraser – will be back from injury too. Both are forward thinking with pace and finishing prowess, traits you can never have enough of.

“James Forrest is a different animal,” Levein said. “If he comes on late in the game, the decision-making will definitely be better.

“There is a point about him and Ryan Fraser. Both thinkers, both two guys that, if there’s a situation where they feel under pressure, they will manage to get something from it.

“There’s also a lot of players [against Israel] who didn’t perform. I’m Lyndon Dykes’ biggest fan and he didn’t perform. I just think the whole team lacked energy and aggression and looked leggy.” 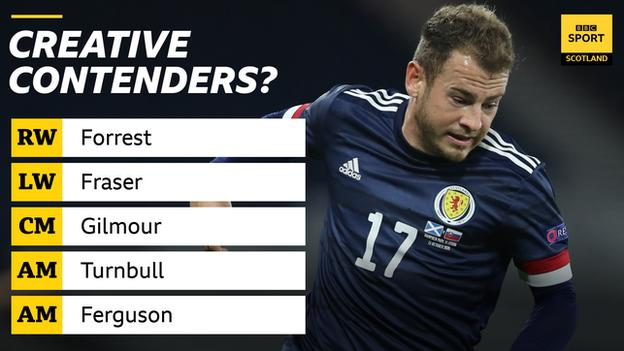 And there are exciting young talents primed to make the breakthrough too. David Turnbull has served his time in the under-21s and is still settling in at Celtic following his £3.25m move from Motherwell. A regular run could easily catapult the midfielder into the reckoning.

There’s also Aberdeen midfield pair Ross McCrorie and Lewis Ferguson, both stars at under-21 level, while Chelsea’s Billy Gilmour may only be 19 but proved last season he can cut it among the Premier League elite.

What’s clear is that every Scottish player, no matter their age, will be busting a gut to catch Clarke’s eye over the coming months.

Plenty of cause for optimism

It would be easy to lose sight of the bigger picture after the deflating last couple of results. But last Thursday in Belgrade is still all that really matters. Any Scotland fan would have taken Euros qualification over stepping up to join the Nations League big boys.

It’s a point not lost on Clarke or his squad.

“One of the reasons I’m late to the press conference is I wanted to say the right words to the players in the dressing room,” Clarke said post-Israel. “It took me a little bit of time to calm down and compose myself to make sure I did thank them for their efforts this week.

“Let’s not forget how everybody in the country felt on Friday when they woke up. It was a magnificent achievement from this group of players and we have to take that positivity into the World Cup campaign.”

The feelgood factor will roll into the World Cup qualifiers – which kick off in March – and put a spring in the step of players and fans alike.

“The big advantage that Steve has is that they have qualified for this tournament, so that will be uppermost in the players’ minds when they think about coming back to seeing their friends again,” Levein said.

“And that is what it will be. A friendly group who have experienced something really positive together. He’s got that in his favour.”