Yesh Atid leader Yair Lapid, currently tasked by the president with forming a government, met Yamina chief Naftali Bennett on Thursday for the first time since fighting between Israel and the Hamas terror group in Gaza broke out several weeks ago.

The discussion with Lapid surrounded the possibility of establishing a government, multiple reports indicated. The rest of Bennett’s party, including No. 2 MK Ayelet Shaked, was not updated on the meeting, Channel 12 news reported.

The Times of Israel reached out to the sides for a response. Sources involved in the negotiations declined to comment.

An unnamed official in the so-called “change bloc” told Channel 13 news that the Thursday meeting “increases the chances Yamina will join official negotiations next week.”

Earlier on Thursday, a negotiation team for Gideon Sa’ar’s New Hope — which campaigned on a right-wing, anti-Netanyahu ticket in the March election — met with a Yesh Atid team to discuss the formation of a government, a move that puts further pressure on Bennett to join a potential “change government” ousting Prime Minister Benjamin Netanyahu.

“Negotiations progressed and agreements were reached,” New Hope and Yesh Atid said in a joint statement following the meeting. “The teams will continue talks in the near future with the aim of reaching agreements to form a government,” the statement added.

Yesh Atid — whose leader has just six days remaining to announce he has formed a government before he has to return his mandate to do so — has reached final agreements with the Meretz and Yisrael Beytenu parties, and near-final understandings with Blue and White and Labor.

The understandings have included handing out potential ministerial and other roles to members of the various parties, as well as agreements on policy. No official coalition deals have been signed.

Bennett has refused to commit to either the pro- or anti-Netanyahu blocs, keeping his options open. He has vowed to do “everything” to prevent the country from going to its fifth election in two and a half years.

The potential deal with Yesh Atid would see Bennett serve as prime minister for two years, followed by Lapid for two years. But Bennett is facing intense pressure from the right against a government that includes the left. His deputy Ayelet Shaked is also said to be strongly opposed.

The most thorny subject is the need to receive support from either Ra’am or the Arab-majority Joint List, both of which are highly controversial for the right due to their strong affinity toward the Palestinians. However, Netanyahu’s own attempt to form a government with Ra’am’s backing (blocked by Religious Zionism and its leader Bezalel Smotrich) has helped legitimize such cooperation.

Bennett and Lapid had reportedly finalized the terms for a coalition several weeks ago, just before the military operation in Gaza began, prompting the Yamina leader to say a “change government” backed by Islamist Ra’am was “off the table.” He and other Yamina members have avoided repeating that sentiment this week, despite heavy pressure from Netanyahu’s right-wing religious bloc to entirely rule out the prospect. 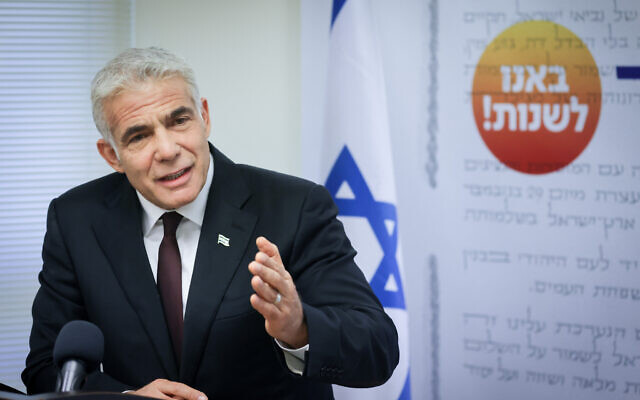 Meanwhile, Bennett is officially only negotiating with Netanyahu, who has offered a merger between his Likud party and Yamina in potential upcoming elections.

Netanyahu has reportedly promised he can bring defector MKs from other parties to bring his numbers up to 61-MK majority if Bennett publicly declares he rules out a government without Netanyahu.

Channel 12 reported Wednesday that some ministers and lawmakers from Likud were considering opposing a merger with Yamina, because such a move would come at the expense of Likud backbenchers.

Shaked is said to be pushing heavily for a merger with Likud and likely new elections, rather than forming a government with the center-left.

‏Tal Schneider contributed to this report.