The Yesh Atid party, led by Yair Lapid, and the Blue and White party, led by Benny Gantz, announced Monday they had made significant progress toward agreeing on a coalition government and would continue working toward that goal.

The two parties are expected to declare they have reached an agreement in the coming day, Hebrew media reported, though Lapid’s time to form a government is running out and his chances were appearing increasingly slim.

“The teams will continue the talks with the common goal of establishing a change [in] government and with the commitment of Ganz and Lapid to achieve the goal,” the parties said in a statement.

Lapid and his so-called change bloc of parties opposed to Prime Minister Benjamin Netanyahu have just nine days left to establish a government before the 28-day mandate he was granted by President Reuven Rivlin expires.

At his party’s faction meeting in the Knesset, Lapid said that “as long as there is still a chance, no matter how small, we will turn over every stone to establish a government.”

“Anyone who wants to talk, my door is open,” he said.

To build a majority in the Knesset Lapid will need, in addition to Blue and White, the partnership of at least the right-wing New Hope and the Yamina parties. Even with those two parties he will come up short and require further support — likely from outside the coalition — from Ra’am, an Islamist party.

At his own faction meeting, Sa’ar reiterated his vow to not join a coalition under Netanyahu in the wake of March elections, Israel’s fourth national vote in two years.

“I say again: We will not sit in a government under Netanyahu,” Sa’ar said.

“Someone who has been in office for more than 12 years straight is responsible for the processes of loss of governance. The person who ruined [things] can’t fix them,” he said.

The flurry of political activity came a day after Yamina leader Naftali Bennett, a key piece in the puzzle for Lapid’s coalition-building efforts, launched a blistering attack on Netanyahu and his handling of the coronavirus outbreak as well as his management of the recent round of fighting with the Hamas terror group in the Gaza Strip.

Bennett then went on to urge — without mentioning any names — potential partners to a coalition to ease their stances to enable forming a government.

“This is not the time to stick to boycotts. This is the time to do the necessary thing and form a functioning government,” he said, referring to key political parties that have ruled out joining a coalition with other potential partners.

Lapid’s mandate to form a government ends on June 2. He and Bennett were on the verge of clinching a coalition deal with the support of the Ra’am party when the fighting with Gaza terror groups broke out, leading Ra’am chief Mansour Abbas to back out and Bennett to later declare that the option was no longer viable. 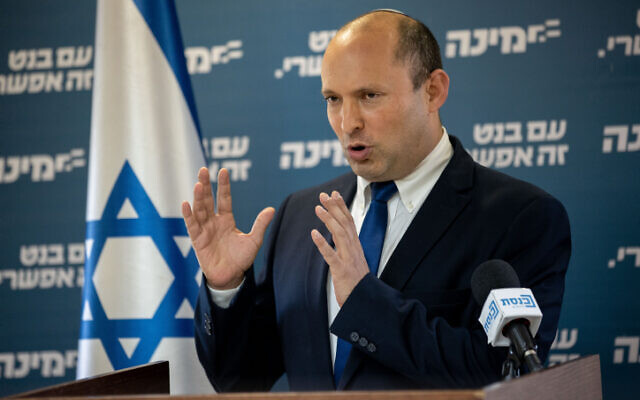 Yamina party head Naftali Bennett gives a press conference at the Knesset on May 5, 2021 (Yonatan Sindel/Flash90)

March’s inconclusive elections left the Knesset divided into three camps. Netanyahu leads a bloc of parties that want him to continue as prime minister, while Lapid leads the so-called change bloc, which wants to oust Netanyahu.

Neither bloc has a majority in the 120-seat Knesset and between the two of them are other parties, Yamina among them, that have not yet committed, or will not commit, to either side.

Netanyahu, whom Rivlin granted first try to form a government, failed to achieve the goal in his allotted time and the task was passed to Lapid. Though Gantz, who is also the defense minister, is in the current unity government with Netanyahu, he has sworn not to partner with the prime minister again.

If Lapid fails to cobble together a coalition during his 28-day window, Rivlin could ask a majority of lawmakers could try to endorse any Knesset member as prime minister. A leader has never before been elected during that time period in Israel. If that 21-day period fails to yield a coalition, the country would be forced into the unprecedented scenario of a fifth election in two and a half years.