Foreign Minister Yair Lapid presented on Sunday what he called a “new vision” for Israel’s relations with the Gaza Strip, saying that Israel “must move toward a multi-year process in Gaza of economy in return for security.”

Speaking at a conference at the Institute for Counter-Terrorism Policy of Reichman University (until recently known as IDC Herzliya), Lapid said that the aim of such a move is “to create stability on both sides of the border.”

“This is not a proposal for negotiations with Hamas. Israel will not award prizes to a terrorist organization and weaken the [Palestinian] Authority that works with us on a regular basis,” Lapid said.

However, shortly after his speech, rocket sirens blared in Israeli communities near the Strip for the third straight night, with online footage showing the Iron Dome system intercepting a rocket over Sderot.

In his speech, Lapid outlined a two-stage plan for changing the economic reality on the ground in Gaza. A combination of international investment, Israel-Palestinian cooperation, and a quiescent Hamas could change life on the ground for ordinary Gazans, Lapid said.

“The political conditions – in Israel and in the Palestinian Authority – don’t allow for diplomatic progress at the moment, but in Gaza we can, and we should, act now,” Lapid said.

Palestinians have often been critical of similar economic plans, saying that there can be no true solution without a political settlement. Some on the Israeli right have opposed such initiatives in the past as a boon to Gaza’s Hamas terrorist rulers.

Palestinian boats participate in a protest against the Israeli-Egyptian security blockade of Gaza, in Beit Lahya on the border with Israel in the northern Gaza strip on August 11, 2018. The Israeli Rutenberg power station can be seen in the background. (AFP PHOTO / MAHMUD HAMS)

Lapid acknowledged that his plan did not deal with any of the so-called outstanding “final status issues” between Israelis and Palestinians. But, he said, beginning a diplomatic process in Gaza could create more favorable conditions for talks, should they emerge.

“In a wider context, the kickstarting of a wider process in Gaza will create better conditions for future negotiations if and when the situation allows for it. We have seen in the past that rounds of fighting in Gaza hurt the chances of returning to the negotiating table,” Lapid said.

Hamas has ruled the Gaza Strip since taking over by force in 2007, two years after Israel withdrew from the enclave in a unilateral disengagement. Israel and Egypt have both imposed crippling sanctions for years on Gaza, in an effort to weaken the terror group, which avowedly seeks Israel’s destruction.

The enclave has posed a thorny policy dilemma for Israel ever since. Hamas and Israel have fought successive wars that left thousands dead, mostly Palestinians. Hamas rockets have rained down on Israeli cities, and Israel has tightened its closure on the enclave, but neither side has been capable of substantially shifting the status quo.

Meanwhile, the tightened blockade — which Israel says is necessary for security — helped create a humanitarian disaster in Gaza. Unemployment soared to nearly 50 percent, while poverty jumped from 40 to 56% between 2007 and 2017, according to the United Nations. The Strip’s corroded, crumbling infrastructure has left it with an ongoing water and electricity crisis as well.

“The policy Israel has pursued up until now hasn’t substantially changed the situation. The closures haven’t stopped the smuggling and production of weapons. Last night, we once again struck Gaza after yet another rocket was fired, and residents ran to their shelters. We need to change direction,” Lapid said.

In its place, Lapid proposed a multi-stage plan for developing Gaza’s economy. The first stage would entail rehabilitating Gaza’s infrastructure in exchange for tight international oversight — as well as quiet from Hamas.

“The rehabilitation process will be defined by a series of pre-set benchmarks, with each one given a specific timeframe. Any breach by Hamas will stop the process or set it back,” Lapid said. 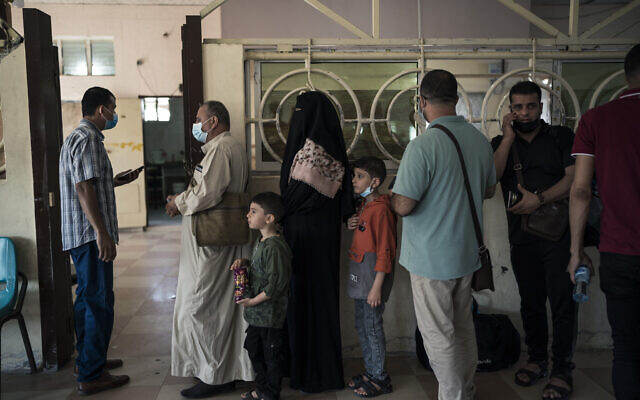 Palestinians wait in line to have their documents checked before crossing the Rafah border with Egypt, southern Gaza Strip, on June 6, 2021. (AP Photo/Felipe Dana)

Many of the projects Lapid mentioned, such as connecting Gaza to natural gas and building a desalination plant, have long been on the table. As recently as February, officials had estimated that a deal for bringing gas to Gaza could be worked out within six months.

Lapid also vowed that both Egypt and the Palestinian Authority would play a role in the process. The PA, which is dominated by Hamas’s Fatah rivals, has almost no footprint in the Gaza Strip.

In the second stage of Lapid’s plan, the two sides would see more ambitious projects. An artificial island would be built off the coast of the enclave — a long-proposed plan to see a port built in Gaza — and the West Bank and Gaza would be linked by infrastructure projects, Lapid said.

The Palestinian Authority would take over civil and economic affairs in the Gaza Strip as part of this step, Lapid said.

“The solution presented here doesn’t address the two-state solution, but my opinion on the matter is well known: Israel needs to act to strengthen the Palestinian Authority and to negotiate with it with an aim of achieving a two-state solution,” Lapid said. 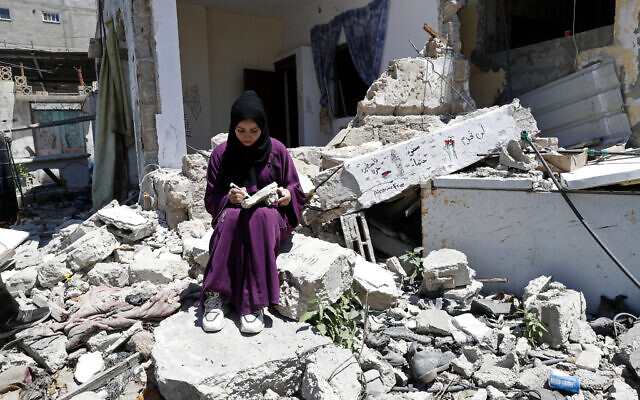 Lapid vowed that if Hamas maintained quiet along its border with Israel, “the reality in Gaza will change dramatically.” But Israel would not hesitate to take action should Hamas violate the unwritten contract, Lapid said.

“If Sinwar and Haniyeh continue to act against Israel, we will know and the international community will know, and mostly the people of Gaza will know, that Hamas refuses to improve life in Gaza because the only thing they care about is killing Jews,” Lapid said.

Lapid said he hopes to bring the plan to the cabinet for approval, adding that he had already discussed it with leaders from the European Union, Egypt, the Gulf States, US Secretary of State Antony Blinken, and Russian Foreign Minister Sergey Lavrov.