Yesh Atid leader Yair Lapid on Monday confirmed that he offered to let Yamina chief Naftali Bennett serve first as prime minister in a government that would see the two rotate the premiership.

In a televised speech, Lapid called for a government of “national agreement” made up of parties from the left, center, and right. He spoke as President Reuven Rivlin wrapped up consultations with party leaders on who should form the next government, with Likud head Prime Minister Benjamin Netanyahu getting more recommendations than Lapid, but not enough for a majority. Yamina, which won seven seats in the March 23 elections, recommended Bennett, the only party to do so.

“We are committed to bringing about the change we promised to the people of Israel. To prevent a government led by a criminal suspect and dependent on racists and extremists,” Lapid said, referring to Netanyahu and his right-wing religious allies.

“The test for a leader is to take tough decisions in complex situations,” he added, and confirmed that he had offered Bennett to be prime minister first as part of a rotation government.

“That’s what the country needs now. The Israeli public needs to see that its leaders can work together,” he said.

There was no immediate response from Bennett, who, in the run-up to the elections, pledged not to sit in a government headed by Lapid.

Naftali Bennett, head of the Yamina party seen with Yamina supporters at the party headquarters in Petah Tikva, on election night, on March 23, 2021. (Avi Dishi/Flash90)

The Yesh Atid chief also addressed Netanyahu’s statement earlier Monday, in which the prime minister accused prosecutors of a “witch hunt,” after the first day of testimony in his graft trial.

“He can’t carry on in his job. He’s become dangerous. To himself, to Israel, and to the rule of law,” Lapid said.

He issued an appeal to parties in the “change bloc” of factions that have pledged not to join a Netanyahu-led government.

“Netanyahu will do everything he can to break you. He’ll look for those who will abandon their parties, he’ll look to break parties apart. Don’t let him. He doesn’t have a government. He doesn’t have a majority,” he said. “It’s a long game and whoever will be determined enough, patient enough, and focused enough will win. We don’t give up and never will. There has never been a more justified political fight and it will end only when we win.”

According to Channel 13 news, Lapid’s and Bennett’s negotiating teams met late into the night ahead of Monday’s meetings with Rivlin, but were unable to finalize an agreement.

The main sticking point was Bennett’s demand to be given double votes in the Ministerial Committee for Legislation and security cabinet so that he can override Lapid, in case their respective blocs come to a stalemate on an issue, the network said.

The report said, however, that the two reached numerous agreements, including on who would fill key ministries, with the Treasury going to Yisrael Beytenu leader Avigdor Liberman and the defense and justice portfolios going to the Blue and White and New Hope parties, respectively, with Bennett demanding key ministries be given to right-wing parties. 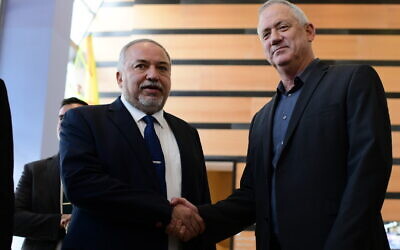 Head of the Blue and White party Benny Gantz (R) and Yisrael Beytenu leader Avigdor Liberman speak to the press after their meeting in Ramat Gan on March 9, 2020. (Tomer Neuberg/Flash90)

Bennett was apparently defining Gantz’s centrist Blue and White, which ran in previous elections with Yesh Atid, as right-wing, but not Liberman, whose hawkish Yisrael Beytenu was previously a key right-wing ally of Netanyahu.

The same network, without citing a source, also said that Netanyahu would try to woo Bennett to join Likud, but that Yamina was demanding to join the ruling party before a government is sworn in.

Even if Bennett were to join Likud or otherwise declare for Netanyahu, the Likud leader would still be short of a majority, unless the Islamist Ra’am party abstains when voting to approve the government, a scenario that the premier’s allies in the far-right Religious Zionism party oppose.

Netanyahu was therefore expected to pressure Religious Zionism leader Bezalel Smotrich to drop his opposition to a minority government propped up by Ra’am. 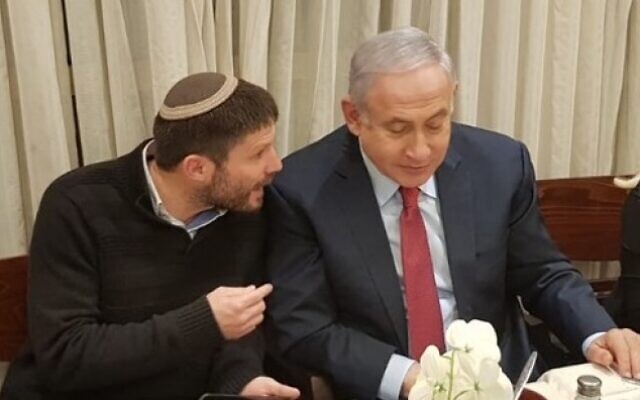 Following Monday’s consultations with Rivlin, Netanyahu had 52 recommendations to form the next government, versus 45 for Lapid, and seven for Bennett.

As he kicked off the meetings in the morning, Rivlin lamented that “at the moment, I can’t see a way to form a coalition.”

He also said that if his first choice to form a government fails, he may kick the mandate back to the Knesset to make a choice, rather than giving a second person a chance to do so first.

In stark comments, the president added that “after four election campaigns, democracy has exhausted itself.”

He also hinted at the possibility that Netanyahu’s corruption trial, taking place at the same time across town, could play a role in his decision on whom he would hand the mandate to.

Following the discussions, Rivlin’s office said he would announce Tuesday which lawmaker he is tasking with forming the next government, based on whom he assesses has the best chance of doing so.