Foreign Minister Yair Lapid sent a message of support to the United States on Saturday, the 20th anniversary of the September 11, 2001 terror attacks.

“The terrible murderous terror attack on the morning of September 11, 2001 changed the world,” Israel’s top diplomat tweeted. “Twenty years after that terrible day, I would like to send a message to the American people and all who wish them harm.

“An attack on you is an attack on us. You are our closest and most important friends and allies in the world. Those who harm our friends, harm us.”

Lapid’s comments joined statements of solidarity from leaders around the world, commemorating the two decades since the al-Qaeda attacks on America and saying that the attackers had failed to destroy Western values.

“We can now say with the perspective of 20 years that [the jihadists] failed to shake our belief in freedom and democracy,” British Prime Minister Boris Johnson said. “They failed to drive our nations apart, or cause us to abandon our values, or to live in permanent fear.”

Queen Elizabeth II, in a separate message, said: “My thoughts and prayers — and those of my family and the entire nation — remain with the victims, survivors and families affected.”

Ursula von der Leyen, the president of the European Commission, said: “On 9/11 we remember those who lost their lives and honor those who risked everything to help them. Even in the darkest, most trying of times, the very best of human nature can shine through.”

Australian Prime Minister Scott Morrison said in an opinion piece that “September 11 reminded us that freedom is always fragile. As Ronald Reagan said, it ‘must be fought for and defended constantly by each generation. That day was an attack on free peoples everywhere. It was an attack on our way of life and the values of liberal democracy. Despite the pain inflicted on that day, the terrorists ultimately failed in their attempts to crush our resolve and change our way of life.”

German Chancellor Angela Merkel stated that “We have now had to recognize that although we have been able to defeat terrorism, which is endangering our security, at the present time we have not achieved all our goals.”

Speaking of the Taliban’s recent takeover of Afghanistan, she added, “That is why it is important for us on the German side to safeguard what we have been able to achieve, education for girls and the like, although we know that this will not be easy with the Taliban. 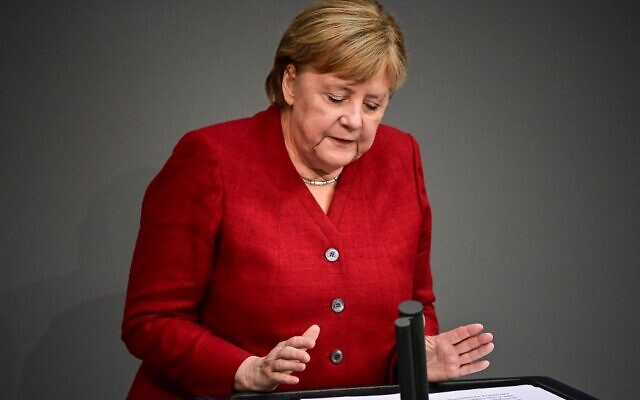 German Chancellor Angela Merkel speaks during a plenary session at the Bundestag in Berlin, on August 25, 2021. (Tobias Schwarz/AFP)

“Above all, bringing citizens in need of protection to Germany and giving them protection is something we feel we have a moral obligation to do,” she said.

French President Emmanuel Macron tweeted: “We will #NeverForget. We will always fight for freedom.”

In Switzerland, a government spokesman said: “The 9/11 terrorist attacks in the USA in 2001 had a profound impact on global politics… Affirming the unconditional rejection of terrorism everywhere and always, Swiss President [Guy Parmelin] expresses his solidarity with all of its victims.”

“Italy stands in solidarity with the United States and its other allies to counter any terrorist threat,” Italian President Sergio Mattarella said.