Ahead of the 20th anniversary of the September 11 terror attacks, American businessman Larry Silverstein recounted to an Israeli television network the story of how he had purchased the Twin Towers in New York just seven weeks before they came down, how he himself survived by a “miracle,” and how he announced his intention to rebuild the World Trade Center just two days later.

Silverstein, 90, told Channel 13 news in an interview aired Tuesday that he had decided to purchase the World Trade Center buildings in Lower Manhattan in July 2001 because “I saw it as a vast opportunity, and that’s why we paid 3.2 billion dollars to acquire it.”

The buildings, which Silverstein leased for 99 years, collapsed just seven weeks later after Islamist terrorists carried out the infamous terror attacks that saw planes slam into each of the Twin Towers, killing 2,606 people.

“The day was a terrible day for the world,” Silverstein told Channel 13. “Miraculously, I’m alive. I’m here, which is a miracle.”

In the weeks after the purchase, Silverstein would regularly meet some of the World Trade Center tenants at a restaurant on one of the upper floors, he said.

“So that morning, I was dressing to get downtown to meet with one of the tenants, and my wife said: ‘You can’t go.’ And I said: ‘Why? I have an appointment downtown.’ She said: ‘Because I made an appointment for you with a dermatologist, and that’s something you canceled last month and you cannot cancel again.’

“When you’re married for 45 years to the same woman and she gets upset, you can’t let that happen,” Silverstein said.

That appointment ended up saving his life.

Silverstein said he had made up his mind to rebuild almost immediately after the attack.

He said he told his wife: “Sweetheart, I think we’re gonna have to rebuild this, and the sooner we get on with it, the better.”

“I remember the governor, [then-New York] Governor [George] Pataki, calling me, I think two days after 9/11, asking me what I think we oughta do, should we rebuild,” Silverstein recounted. “And I said, Governor, I think we must. I really think it’s absolutely obligatory. We’ve gotta put this back as quickly as we possibly can.

“It was, I think, two weeks after 9/11 that our first design meeting was [held],” he added. “I brought everyone back for the redesign of this building, Seven World Trade Center, because this was the last building to come down on 9/11, and we decided it was the first building that was gonna go back up after 9/11.” 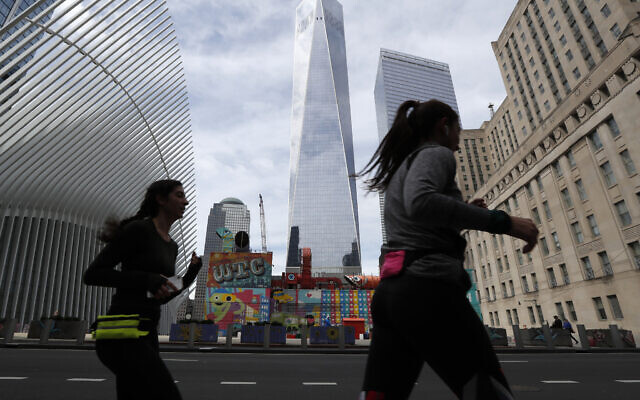 Seven World Trade Center was a smaller building that collapsed on the day of the attack, due to the damage caused by the collapse of the two towers.

Silverstein hailed the success of the rebuilt World Trade Center, saying it had helped transform the area back into a bustling business center.

“The quality of what’s here has totally changed, the neighborhood’s changed,” he said. “There are so many families living here right now. All kinds of new apartment houses. A completely different environment here, in Lower Manhattan. And 28 percent of the people who live here, work here at the Trade Center or work downtown. That’s the highest work-live ratio in the entire United States.”