With just days until the 2020 Tokyo Olympics are set to kick off a year late amid rising COVID cases in Japan and a sprinkling of athletes testing positive, the head of the Tokyo Olympics organizing committee said a last-minute cancellation of the Games is still possible.

“We can’t predict what will happen with the number of coronavirus cases. So we will continue discussions if there is a spike in cases,” said Toshiro Muto at a press conference on Tuesday when asked about the possibility of canceling the Games.

Israel has 90 athletes attending the Games, most of whom are arriving in Tokyo this week. All of the members of Israel’s delegation are vaccinated.

But while Olympics chief Thomas Bach revealed “doubts” and “sleepless nights” over the postponed Tokyo Games on Tuesday, he said cancellation was not an option. Speaking at the International Olympic Committee (IOC) session, Bach said the unprecedented step of postponing the Games “weighed on me” as it proved more complicated than he thought.

The build-up to Friday’s opening ceremony has been exceptionally rocky, with Tokyo still under a state of emergency and public opinion consistently against the Games, which will be held largely without spectators.

Russian tennis coach Igor Andreev leaves the court after a practice session at the Ariake Tennis Center at the 2020 Summer Olympics, on Tuesday, July 20, 2021, in Tokyo. (AP Photo/David Goldman)

“Over the past 15 months we had to take many decisions on very uncertain grounds. We had doubts every day. We deliberated and discussed. There were sleepless nights,” said Bach. “This also weighed on us, it weighed on me. But in order to arrive at this day today, we had to give confidence, had to show a way out of this crisis,” he added.

Bach has drawn scattered protests during his visit to Japan, where the latest poll in the Asahi Shimbun newspaper showed 55% of respondents oppose holding the Games now.

Olympic and Japanese officials have staunchly defended the Games, which are being held in a strict biosecure “bubble” with daily testing. About 80% of athletes have been vaccinated.

“We can finally see at the end of the dark tunnel,” said Bach, adding: “Cancellation was never an option for us. The IOC never abandons the athletes… we did it for the athletes.”

The session preceded an Olympics that will mainly take place in empty stadiums to the sound of recorded crowd noises, starting with the opening ceremony in the 68,000-capacity Olympic Stadium.

Japanese Prime Minister Yoshihide Suga said on Tuesday that the world needs to see that Japan can stage a safe Olympics.

“The world is faced with great difficulties,” Suga told International Olympic Committee members in a closed-door meeting at a hotel in Tokyo, adding that “we can bring success to the delivery of the Games.”

“Such fact has to be communicated from Japan to the rest of the world,” Suga said through an interpreter. “We will protect the health and security of the Japanese public.” 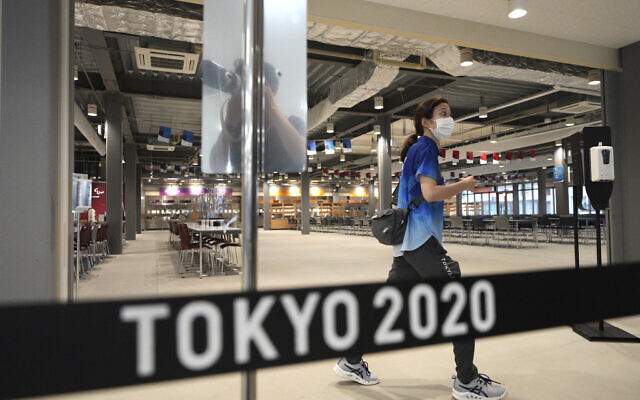 The main dining hall is seen during a press tour of the Tokyo 2020 Olympic and Paralympic Village, on June 20, 2021, in Tokyo. (AP Photo/Eugene Hoshiko)

He acknowledged Japan’s path through the pandemic toward the Olympics had gone “sometimes backward at times.”

“But vaccination has started, and after a long tunnel, an exit is now in our sight,” Suga said.

The prime minister’s office said on Monday that more than 21% of Japan’s 126 million population has been inoculated.

The IOC leader praised his hosts Tuesday, saying “billions of people around the world will follow and appreciate the Olympic Games.”

“They will admire the Japanese people for what they achieved,” Bach said, insisting the games will send a message of peace, solidarity and resilience.