Prime Minister Boris Johnson praised the “heroic” evacuation effort, even as the government acknowledged some eligible Afghan civilians had been left behind. The UK’s top military officer conceded that “we haven’t been able to bring everybody out.”

The UK government said late Saturday that about 1,000 troops who ran an airlift of British nationals and Afghan civilians had departed from Kabul airport, hours after the final evacuation flight for civilians. Most countries apart from the United States had already left.

Before departing, Britain’s ambassador to Afghanistan, Laurie Bristow, said from Kabul airport that it was “time to close this phase of the operation now.”

“But we haven’t forgotten the people who still need to leave,” Bristow said in a video posted on Twitter. “We’ll continue to do everything we can to help them. Nor have we forgotten the brave, decent people of Afghanistan. They deserve to live in peace and security.”

Britain says it has evacuated more than 15,000 people from Kabul in the past two weeks but that as many as 1,100 Afghans who were entitled to come to the UK have been left behind. Some British lawmakers who have been trying to help stranded constituents and their families believe the true total is higher.

The UK should be very proud of what you have done. Every one of you have displayed the highest levels of professionalism and bravery. You have helped thousands to get to a better future and safety. Thank you. @16AirAssltBde @VAdmBenKey @DefenceHQ pic.twitter.com/vHzxwS2Quv

“We haven’t been able to bring everybody out, and that has been heartbreaking, and there have been some very challenging judgments that have had to be made on the ground,” the head of British armed forces, Gen. Nick Carter, told the BBC.

Foreign citizens from around the world and the Afghans who worked with them have sought to leave the country since the Taliban’s swift takeover this month after most US forces departed. About 117,000 people have been evacuated through Kabul airport, according to American officials.

The desperate, chaotic exodus turned deadly on Thursday, when a suicide bomber struck crowds gathered near the Kabul airport. The attack killed at last 169 Afghans and 13 American troops. Two British citizens and the child of another Briton also were among the dead.

In London, Afghans came to the Afghanistan and Central Asian Association advice center, desperate for news of friends and relatives.

Saraj Deen Safi said he had been unable to make contact with relatives who were near Kabul airport since Thursday’s bomb attack. He said he hoped they would be able to reach a safe European country, but he felt “despaired” at the lack of news. 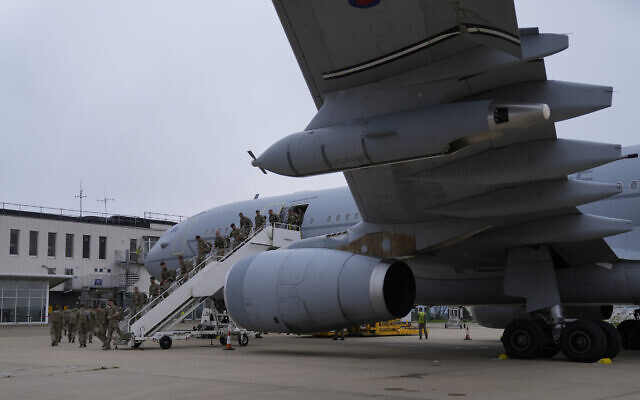 Members of the British armed forces 16 Air Assault Brigade walk to the air terminal after disembarking a RAF Voyager aircraft at Brize Norton, England, as they return from helping in operations to evacuate people from Kabul airport in Afghanistan, Saturday, Aug. 28, 2021. (AP Photo/Alastair Grant, Pool)

While the UK has evacuated thousands of former interpreters and others who worked with British forces, the advice program coordinator for the London association, Shabnam Nasimi, said she was “devastated” for many others who had been “abandoned.”

“And these include journalists and judges, for instance, who are directly going to be targeted by the Taliban,” she said. “The future of these individuals is very bleak.”

The British prime minister promised Friday to “shift heaven and earth” to get more people from Afghanistan to Britain by other means, though no concrete details have been offered.

UK officials hope some people may be able to leave Afghanistan overland for neighboring countries, where their claims to come to the UK could be processed. That will depend on diplomatic coordination and cooperation — not least from the Taliban. 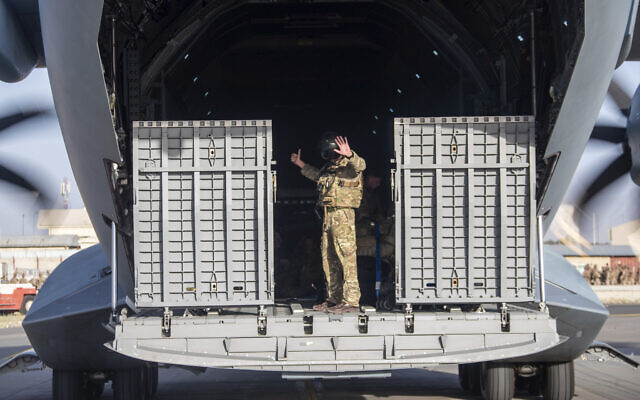 Some 150,000 British troops served in Afghanistan in the years after the 2001 invasion that set out to remove al-Qaida from the country, and 457 UK personnel died there.

Johnson said Saturday that the two-decade Afghan deployment was worthwhile despite its chaotic denouement.

“Our purpose in Afghanistan was simple — to protect the United Kingdom from harm — and you succeeded in that central mission,” Johnson said in a letter to Britain’s armed forces.