A Knesset panel voted Tuesday to expand an electronic surveillance program to nearly anyone in isolation due to the coronavirus, significantly ratcheting up powers the state can use to enforce quarantine regulations.

The new rule okayed by the Knesset’s Constitution, Law and Justice Committee means that anyone in quarantine — aside from those in isolation for a day or less — will be asked to opt in to an electronic surveillance program that allows the police or Shin Bet security service to track your phone’s movements and ensure you remain at home.

Those who decline to opt in to the program will be subject to increased police enforcement of their stay in quarantine, a Knesset spokesperson said.

Israeli regulations require unvaccinated individuals who were in contact with confirmed coronavirus carriers to quarantine for 13 days unless they receive two negative tests. Those who recovered from the virus are exempt. Travelers from most countries must also quarantine if not vaccinated, and even if vaccinated, must isolate until test results are received.

Over 168,000 Israelis were in quarantine as of Tuesday morning, the vast majority of them school children, according to Health Ministry figures.

Ultra-Orthodox Jewish men from the Rina Shel Torah yeshiva seen under quarantine following the spread of COVID-19 in the yeshiva, in the northern Israeli city of Karmiel, September 2, 2020. (David Cohen/Flash90)

Some have expressed privacy concerns regarding use of the electronic surveillance program, which was initially struck down by the High Court when the last government attempted to impose a similar tracking system without anchoring it in legislation.

“I too worry about harm to privacy and the slippery slope involved, but we need to remember that this step is designed to avoid more drastic measures that the state has done away with, like the coronavirus hotels,” committee head Gilad Kariv said, according to a Knesset statement.

He added that he would seek a written guarantee that personal information captured by the program would not be held for more than 30 days.

“We’ll watch the issue of the database closely,” he said. 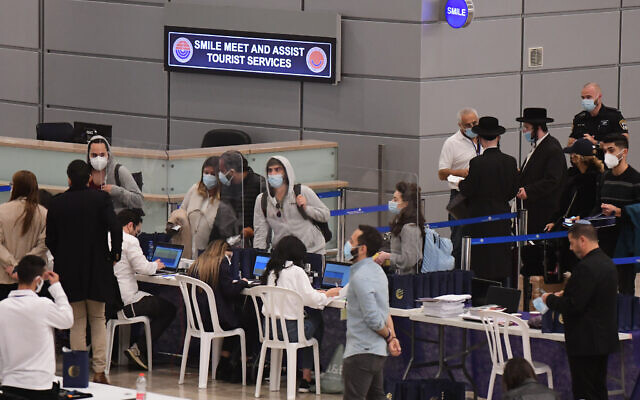 Passengers arriving on a flight from Frankfurt are given electronic monitoring bracelets to ensure they don’t violate quarantine. at Ben Gurion Airport, March 1, 2021. (Tomer Neuberg/Flash90)

Israel recorded over 10,700 new coronavirus cases on Monday and appeared set to near that tally on Tuesday as well. Health Ministry Director-General Nachman Ash warned the committee Tuesday that the current wave of coronavirus infections is surpassing anything seen in previous outbreaks.

“A week ago we were in a clear downward trend. In recent days we’ve been seeing that decline stop, and the virus reproduction number is [again] above 1,” Ash said of the so-called R value, which indicates how many people each virus carrier will infect. Values above 1 show that the outbreak is growing, while those below 1 show that it is shrinking.