BEIRUT — Lebanon’s President Michel Aoun Thursday demanded Israel halt all exploration in an offshore gas field on its southern border, as part of an ongoing dispute over their shared sea frontier.

The countries, which are still technically at war, last year took part in indirect US-brokered talks to discuss demarcation to clear the way for offshore oil and gas exploration.

But those talks stalled after Lebanon demanded a larger area, including part of the Karish gas field, where Israel has given a Greek firm rights for exploration.

“Lebanon is within its rights to evolve its position,” Aoun told visiting US envoy David Hale, asking for “international experts” to weigh in on the issue.

He called for a “commitment to not carrying out any oil or gas activities and not starting any exploration in the Karish field and its adjacent waters” until the matter was settled, the presidency said.

The talks last year were supposed to discuss a Lebanese demand for 860 square kilometers (330 square miles) of territory in the disputed maritime area, according to a map sent to the UN in 2011.

But Lebanon then said the map was based on erroneous calculations and demanded 1,430 square kilometers (552 square miles) more territory farther south, including part of Karish.

“It seems that Lebanon prefers to blow up the talks instead of trying to reach agreed-upon solutions,” Steinitz said in a statement.

“Unfortunately, this won’t be the first time in the past 20 years that the Lebanese changed their naval maps for propaganda purposes,” he continued. “Obviously, unilateral Lebanese steps will be met in kind by Israel.”

Israeli Minister of Energy Yuval Steinitz during a discussion on a bill to dissolve the parliament, at the Knesset, in Jerusalem on May 29, 2019. (Hadas Parush/Flash90)

Aoun, the caretaker prime minister and the outgoing defense minister still have to sign it before Lebanon sends it to the UN to make its new demand official.

Lebanon and Israel began indirect talks with US mediation in October to reach a deal over the disputed area that is believed to be rich with oil and natural gas deposits. The meetings, which stopped few weeks later, were held at a UN post along the border of the two nations.

The negotiations were the first non-security talks to be held between the two countries, which remain technically in a state of war and have no diplomatic relations following decades of conflict. Resolving the border issue could pave the way for lucrative oil and gas deals on both sides.

Hale on Thursday said the US was ready to continue brokering Israel-Lebanon talks “on the basis on which we initiated these discussions,” appearing to reject the Lebanese move toward demanding a larger area.

The US envoy’s visit comes as Lebanon’s top politicians have for months argued over the composition of a new cabinet to launch reforms and unlock financial aid to lift the country out of its worst economic collapse in decades.

“The time to build a government, not block it, is now,” Hale said. “Those who continue to obstruct progress on the reform agenda jeopardize their relationship with the United States and our partners and open themselves up to punitive actions.” 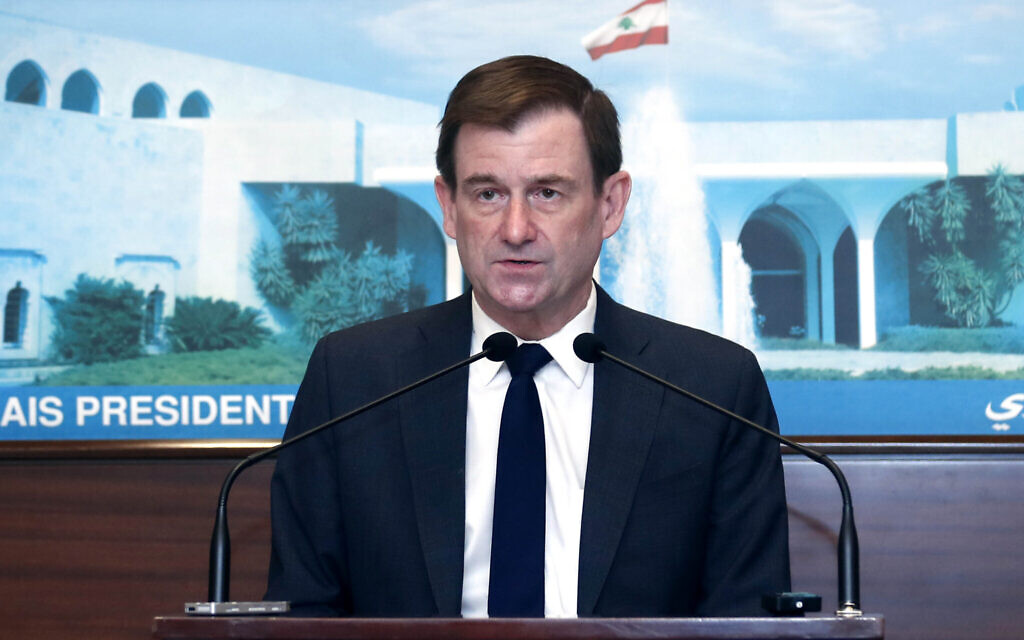 US Undersecretary of State for Political Affairs David Hale, speaks after meeting with Lebanese President Michel Aoun, at the presidential palace, in Baabda, east of Beirut, Lebanon on April 15, 2021. (Dalati Nohra/Lebanese Official Government via AP)

The US in November slapped sanctions on Aoun’s son-in-law, former energy and foreign affairs minister Gebran Bassil, for alleged corruption.

Hezbollah is black-listed by Washington, but it is also a powerful political player in Lebanon with seats in parliament.

Lebanon’s government stepped down after a massive blast at Beirut’s port in August 2020, but deeply divided politicians have been unable to form a new cabinet ever since.