Incoming finance minister Avigdor Liberman is planning to drastically reduce coronavirus-era unemployment benefits in a bid to get thousands of Israelis back into the workforce, Channel 12 reported Wednesday.

Liberman, of the right-wing secular Yisrael Beytenu party, is the designated finance minister in the “change government” coalition set to be sworn in on Sunday.

Among his first major actions will be to end furlough payments to Israelis under 45, saying that there were some 130,000 jobs that needed to be filled, according to the TV report. The payments run until the end of June and won’t be extended.

According to the report, Liberman has been meeting Finance Ministry officials in recent days to firm up his plans.

Currently, the unemployment benefits are poised to end on July 1 for Israelis under 28 years old who do not have children.

Recent economic data has indicated that young Israelis are choosing not to go back to work, at least not at the expected rate, even as the coronavirus pandemic wanes and the economy gets back on track.

The reluctance to return to work has been blamed on the benefits they continue to receive.

The pandemic, which caused social distancing and lockdowns, saw a sharp rise of young people being furloughed.

Liberman spoke against the benefits earlier in the year. 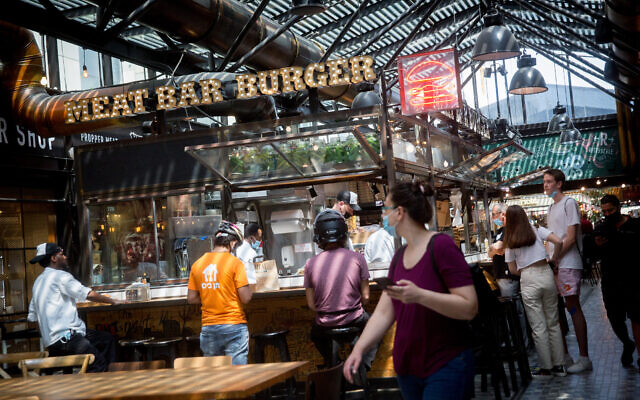 Israelis dine at restaurants at the Sarona market in Tel Aviv on April 21, 2021. (Miriam Alster/Flash90)

According to Channel 12, Liberman’s other economic plans include passing a two-year state budget by the end of the year. Israel’s last government fell over a failure to pass a budget. The government last passed a state budget for 2019.

Liberman also has plans to not raise taxes, not make budget cuts but add billions to infrastructure and multi-year defense plans, Channel 12 said.

Shoshanna Solomon contributed to this report