SCHULD, Germany (AFP) — Aware that a storm was brewing, Cornelia Schloesser quickly installed a water pump in the cellar of her bakery.

But “within minutes, a wave was in the house” and she lost the business her family had held for a century in Schuld, a village in flood-hit western Germany that now looks like a battlefield.

“The oven is just junk now,” she said as she examined the extent of the damage from torrents of water unleashed in a violent storm overnight Wednesday, killing more than 100 people in two western German regions.

The front of her bakery, where just two days ago she was selling bread, has been reduced to rubble.

Bits of scrap metal, concrete, glass and wood have piled up around the storefront. A tangle of branches sticks out of a window.

Schloesser remembers the inundation hitting a nearby village.

“It’s all been a nightmare for 48 hours, we’re going round in circles here but we can’t do anything.”

Like her, several residents wander through the ruins of the 700-strong village which once drew tourists, located in the lush, green Ahr Valley, not far from Bonn.

As torrential rain lashed the ground on Wednesday night, the normally peaceful, meandering river in Schuld swelled and unleashed a furious flood.

As the sun rose on Thursday, news started filtering through: houses had been swept away, walls destroyed, roofs torn off, bridges and roads collapsed.

What came as a bigger shock was that people in the region had lost their lives, although no one died in Schuld in what is deemed a miracle. 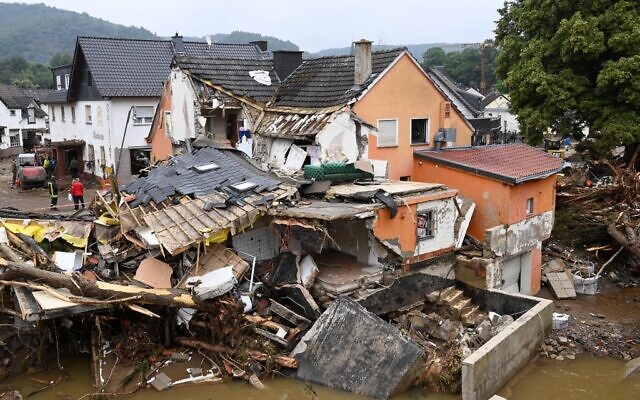 The river, which normally doesn’t rise above one meter (3.3 feet), surged up to eight meters.

The river is still roaring through and people look shell-shocked, scared, exhausted.

“Caravans, cars were washed away, trees were uprooted, houses were knocked down. We have lived here in Schuld for over 20 years and we have never experienced anything like it,” said Hans-Dieter Vrancken, a 65-year-old local.

“It’s like a war zone,” he added, surveying the damage.

Thomas Geilen, 53, had come to help his 28-year-old son who was renovating a house in the village for two years and planned to move there. He had even moved in furniture earlier this week. In a matter of hours it was swallowed by the floods. 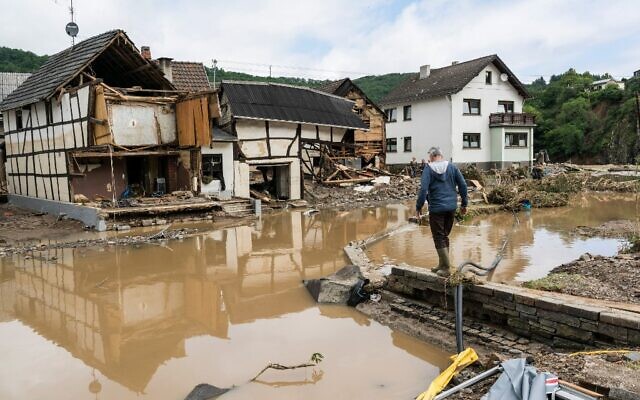 A man walks through the floods towards destroyed houses in Schuld near Bad Neuenahr, western Germany, on July 15, 2021 (Bernd LAUTER / AFP)

“The water kept rising and 10 minutes later it had penetrated the house,” Geilen said. “The water took everything with it.”

The main road to the neighboring village has been partially swept away. All the shops in the center are devastated: not just the bakery, but also the hairdresser, fishmonger, delicatessen and a hotel.

Dozens of houses have been severely damaged, some of them threaten to topple, and six are completely destroyed.

Aided by firefighters, residents tried to clear up the mass of debris, to no avail.

Some 50 kilometers (30 miles) away in Bad Neuenah-Ahrweilar, Agron Berischa is still astounded by the speed of the disaster.

“Our flat, our office, our neighbors’ houses. Within 15 minutes.”