Likud MK Nir Barkat said on Tuesday that he backs in principle term limits for the prime minister, a day after Justice Minister Gideon Sa’ar announced that such legislation was in the works.

“Yes, I believe in limiting terms,” Barkat told the Ynet news site when asked if his position had changed since he last voiced public support for term limits in 2020.

“I remember as mayor of Jerusalem I was debating whether to do two or three terms,” he added parenthetically. He served two five-year terms in 2010-2018.

Under the planned legislation — which does not relate to mayoral limits — a prime minister could serve no more than eight years in total, New Hope party leader Sa’ar announced on Monday. According to the Justice Ministry, the proposed bill would not take effect retroactively, and therefore would not prevent opposition leader Benjamin Netanyahu from holding the office in the future.

But when Barkat was asked if he’d support Sa’ar’s bill, he said, “I belong to the Likud movement, and we will make a decision together as a movement.”

Barkat, who is seen as a top contender for the party’s leadership, said replacing Netanyahu is not currently “on the agenda.”

“The day that Netanyahu decides to end his term — and I do not see that happening at the moment — there will be primaries in Likud and I will win,” he said.

Netanyahu decisively won the Likud leadership primary in 2019, when he defeated a challenge by former party minister Sa’ar. Sa’ar later left Likud in 2020 to start the New Hope party, which campaigned on a pledge of not serving in a government led by Netanyahu.

Cumulatively, Netanyahu has served as prime minister for 14 years, 12 of them consecutively since 2009, until he was ousted earlier this year by Prime Minister Naftali Bennett. Netanyahu is currently on trial in three corruption cases, although he denies any wrongdoing.

“The commitment to limit the term is part of the New Hope platform and is also included in the basic guidelines of the government,” Sa’ar said in the statement on Monday. “Too long a rule brings with it a concentration of power and the risk of corruption, and therefore it is right to include the principle of restriction in the Basic Law.”

Basic Laws are a series of quasi-constitutional pieces of legislation. The bill will be brought for government approval in the winter session of parliament that begins in October, the statement said.

Setting term limits, and potentially curtailing Netanyahu’s political career, was a key element in negotiations to form the current coalition government led by Bennett of the Yamina party. 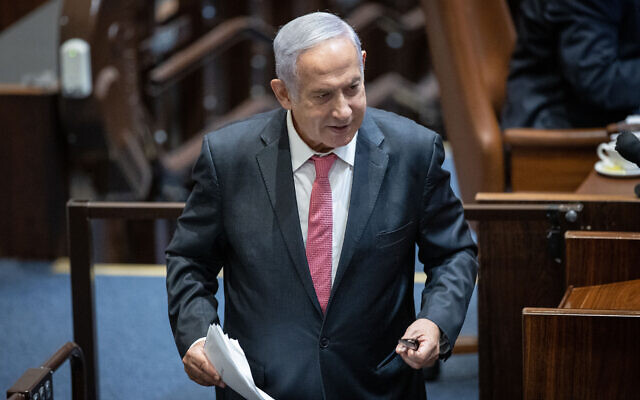 A spokesperson for Sa’ar told The Times of Israel that the legislation was not aimed personally at Netanyahu, but noted that Sa’ar was also working on additional legislation banning anyone who is facing indictments from running for office.

In June, as final frantic negotiations were being held on a coalition agreement that eventually unseated Netanyahu, Channel 12 news reported that the parties had agreed to advance a law preventing a two-term prime minister from running for a parliament seat for four years. Netanyahu’s Likud party reacted furiously to the report.

Such a law would only apply to Netanyahu, the only living prime minister who fits the description, and would keep him not just out of the prime minister’s seat, but also the Knesset.

A report in the Haaretz daily said the law had been proposed by New Hope and was aimed at preventing Netanyahu from working to topple the coalition since it would effectively oust him from the Knesset in the following election.