Likud MK David Bitan was suspended from heading Knesset plenary sessions, after he and other opposition lawmakers appeared to mislead the parliament’s secretary so that a yes vote from right-wing MK Itamar Ben Gvir was not registered, according to a Tuesday television report.

Bitan was running a Knesset session on Monday during a vote on a bill brought by the Arab-majority Joint List party to establish a commission of inquiry into “police failures” in Israel’s Arab community. Netanyahu’s Likud, and allies in the Religious Zionism Party, both in the opposition, voted in favor of the Joint List’s bill.

However, when Knesset Secretary-General Yardena Meller-Horowitz called upon MK Itamar Ben Gvir, whose Otzma Yehudit faction is part of the far-right Religious Zionism alliance, he was apparently not present.

The opposition lawmakers were accused of misleading the Knesset secretary after realizing the vote would not pass even with Ben Gvir’s vote, because the Religious Zionism MK reportedly preferred to avoid voting in favor of bills advanced by the Joint List, whose members he has called “terror supporters.” Likud lawmakers had applied heavy pressure on Ben Gvir to support the measure, but were apparently bent on giving him cover when it became apparent his vote wouldn’t change the outcome.

The vote failed to pass 54-57, without counting Ben Gvir’s vote.

Six separate eyewitnesses told the Kan public broadcaster that the far-right MK did indeed vote in favor of the bill at the last minute. 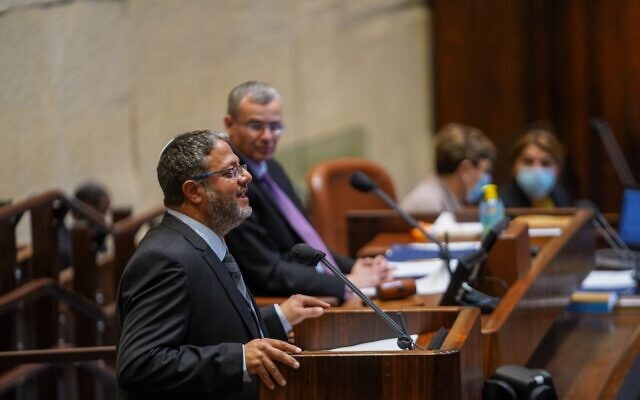 Last week, Levy himself accidentally voted the wrong way on a bill that would have reformed the system for appointing rabbinical court judges, causing the coalition an embarrassing defeat with a 51-51 tie, meaning the legislation failed to pass.

Coalition MK Abir Kara of the Yamina party became the center of controversy earlier this month after he was caught illegally voting twice on a bill limiting unemployment benefits. Kara, who is also a deputy minister in the Prime Minister’s Office, said he accidentally voted from the computer of fellow Yamina MK Idit Silman.

Earlier this month, the State Prosecutor’s Office announced that it would file an indictment against Bitan on charges of bribery, fraud and breach of trust, as well as money laundering and tax offenses. The charges date back to when Bitan was deputy mayor of Rishon Lezion, before he was elected to the Knesset in 2013, and also include his tenure as an MK. He has denied all wrongdoing.

Raoul Wootliff contributed to this report.