“We discovered this evening that MK Silman walked around here with a recording device in her pocket, taping the Knesset members in the plenum for Channel 12,” Litzman said during an overnight session at the Knesset.

“[Moshe] Gafni and I filed a complaint with the speaker of the Knesset. This is a horrible act,” he said, referring to his party’s leader.

Litzman then further claimed that “Silman told the coalition members about the recordings so that they would speak nicely.”

“What nonsense. We were filming Idit Silman when she had to run for a vote. She turned off the microphone and entered the plenum,” Liel tweeted.

Channel 12’s newscast has been, in its different forms, a ratings leader in Israel for many years. But it has increasingly drawn negative attention from some on the right of the political spectrum, who claim that the outlet is a propaganda tool of the left.

There was no comment on the matter from Silman.

The Yamina lawmaker has repeatedly come under attack from opposition lawmakers, and has said in the past that the “kindergarten tactics” being used against her were not random and were part of “a clear method with a guiding hand.” Silman has also been the target of threats, as some on the right have accused her and the rest of her party of betraying the right by forming a unity government to oust Benjamin Netanyahu after 12 years of rule.

The accusation against Silman was the second attack by the two Haredi lawmakers on a coalition lawmaker, hours earlier Gafni lashed out at Religious Affairs Minister Matan Kahana over his proposed reforms of the kashrut certification industry.

“Antiochus!” Gafni shouted repeatedly in Kahana’s direction, as he addressed the Knesset. Antiochus is remembered in Jewish tradition as the villain of the Hanukkah holiday who banned Jewish religious rites, sparking the Maccabean revolt. 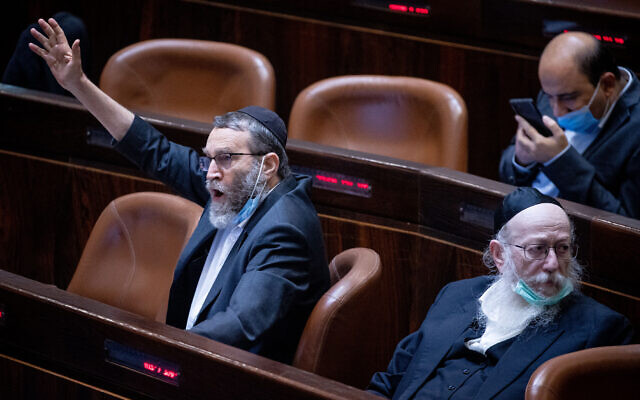 Knesset Speaker Mickey Levy rebuked Gafni, but did not eject him from the plenum, as he later did when Shas MK Moshe Arbel denounced Kahana, using the same term.

“What a disgrace to call an Israeli minister a thing like that,” Levy said to Arbel.

Litzman, meanwhile, branded Kahana a “Reform Jew” — a denigration of the highest order in the Haredi world — in an interview with the right-wing Channel 20.

Ultra-Orthodox lawmakers have used similar rhetoric against Prime Minister Naftali Bennett, who heads the right-wing Yamina party that Kahana is a member of. Both Bennett and Kahana are modern Orthodox.