As rocket alert sirens rang out in Israel and IDF airstrikes hit Gaza last week, an ice cream factory joined a long list of sufferers of collateral damage in the recent round of fighting between Israel and Gaza-based Palestinian terrorists.

“We tried to save what we could, but it’s all gone now,” said Sami Ghazali, a 40-year-old Gaza resident whose father founded Ma’touq Ice Cream. The chain has five shops around the Gaza Strip, although operations were suspended in three of them during the coronavirus pandemic.

With the latest mini-war between Israel and Hamas apparently over, Gazans have been left to pick up the pieces. Residents of the coastal enclave have already learned from three previous rounds of violence not to expect a speedy reconstruction. Aside from Israeli restrictions on importing building material into the Strip, there are fears that the international community could be less willing to open up its wallet just to see the fruits of rebuilding efforts turn to rubble again.

Mansour, a Gazan shopkeeper whose store was destroyed in the fighting, sees little reason for optimism. He said he carefully invested in his shop for years, pursuing his dream of becoming an independent businessman.

But it all came crashing down a few days ago when the building housing his shop was destroyed in the fighting.

“I’m confused as to why this happened to me. I never hated anyone or did anything to anyone. I don’t belong to anyone’s faction or political party,” Mansour said.

The Israeli army did not respond to a request for comment on whether there was a strike near either the shop or ice cream factory or what may have been targeted.

Mansour believes Israel was responsible for the destruction of his store. The Israel Defense Forces maintains that hundreds of failed Palestinian rocket launches sowed havoc in the Strip during the fighting and are responsible for at least some of the damage.

The 11 days of fighting toppled high-rises, smashed a major thoroughfare in Gaza City’s downtown and left people, including children, screaming for help from under the rubble.

Hamas’s public works ministry said 258 buildings — around 1,042 residential and commercial units — were destroyed during the fighting. Another 769 units were severely damaged, rendering them uninhabitable, and 14,536 suffered minor damage. Seventeen hospitals were damaged, as well as 53 schools.

Over 100,000 people were internally displaced during the hostilities, according to the UN. While many have since been able to return to their dwellings, others have been left homeless.

The Israeli military says it does not target civilian structures and takes pains to minimize harm to noncombatants. It maintains it is forced to operate in civilian areas because Palestinian terror groups fire rockets at Israel from inside Gaza’s densely packed cities.

The complex battlefield, with its overlapping military and civilian targets, has left Gazans terrified of becoming collateral damage, and real estate considerations include macabre calculations of whether a location could be hit by an Israeli strike or errant Gazan rocket.

Rockets are launched towards Israel from Gaza City on May 20, 2021. (Mahmud Hams/AFP)

The Ghazalis said they paid a premium to situate their ice cream factory in what they thought was a safe place: an industrial zone in the central Gaza Strip, close to United Nations institutions.

“We felt we were safe there. I often thought that if there were an escalation in Gaza, I would take my children and sleep there,” Ghazali said.

It was fortunate for Ghazali and his family that they did not choose to seek shelter in the family factory. Last Monday, following reports of Israeli fire, they discovered that the factory was in ruins. Without a factory, Ghazali has no way to restock his ice cream stores, and he is not sure how he will get back on his feet.

“Where will we get the money? The only way would be to sell my house, and then we’d have nowhere to live,” Ghazali said dismally. “We don’t have even a bit of hope.”

Gaza has been in a humanitarian crisis since well before the current fighting. The unemployment rate in the coastal enclave is over 50 percent, and poor access to water and rolling electrical blackouts are a fact of life for many Gazans.

The destruction wrought by the latest round of fighting also compounded the still-open wounds of the 2014 war between Israel and Hamas. Operation Protective Edge, as it is known to Israelis, lasted 51 days and left 96,000 houses damaged or destroyed — 10,000 of them completely — according to the United Nations.

Seven years on, about 3,700 Gazans — some 11% of those displaced — are still waiting for their homes to be rebuilt, according to Shelter Cluster, a UN-Red Cross initiative. 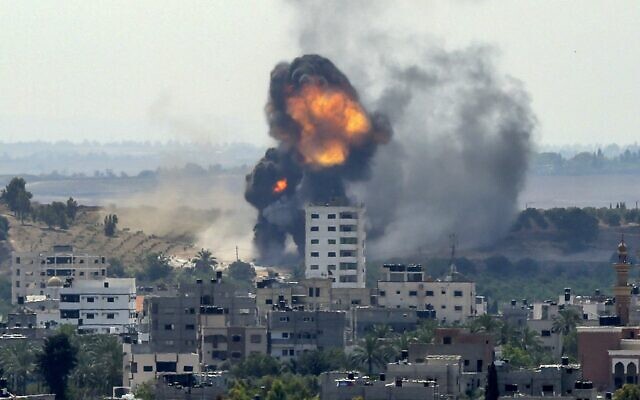 Israel places tight restrictions on which materials can enter the Gaza Strip, arguing that Hamas, a terror group sworn to Israel’s destruction that is the de facto authority in the territory, will appropriate them for military purposes. The measures have been in place since 2006, a few months before Hamas took over Gaza from the rival Fatah group, which rules the West Bank.

Many materials needed for construction — such as cement, gravel, and steel rods  — are classified as “dual-use” by Israel due to their utility in building military infrastructure, particularly underground tunnels, and thus only allowed to enter in closely regulated quantities.

Defense Minister Benny Gantz said on Sunday night that the Israeli government knew that at least some of the materials sent to Gaza for its reconstruction would likely be diverted by Hamas to use for tunnel-building.

“You cannot bring in anything, any kind of raw material, into the Gaza Strip, without it being used by Hamas. This is the Middle East, not Sweden,” Yom-Tov Samia, a retired Israeli general who directed Israel’s Southern Command, said in a phone call.

After widespread bombardment in response to rocket fire in 2014, the Israeli government along with the Palestinian Authority and the United Nations formulated a temporary arrangement, known as the Gaza Reconstruction Mechanism, to allow Gazans access to construction materials.

The mechanism carefully vetted projects in Gaza and waived restrictions. Israel and the Palestinian Authority were allowed oversight over who received materials, where they used it and how much they got. The United Nations, for its part, sought to ensure that the goods reached their intended recipients.

Human rights groups criticized the mechanism for adding layers of bureaucracy, thereby delaying and increasing the cost of reconstruction.

“A tremendous amount was rebuilt. There was an effort by the international community and people in Gaza to rebuild — but still, seven years on, many homes have yet to be fully rebuilt,” said Tania Hary, who directs Gisha, a left-wing nonprofit that advocates for greater freedom of movement for Gazans.

Some Gazans found themselves removed from the system for unclear reasons and had to appeal, rights groups said.

In order to try and prevent the materials from being used by terror groups, contractors were required to place 24-hour cameras in their warehouses to supervise the material. The cameras were powered by batteries that were themselves “dual-use,” making them a rare commodity in Gaza, Hary said. 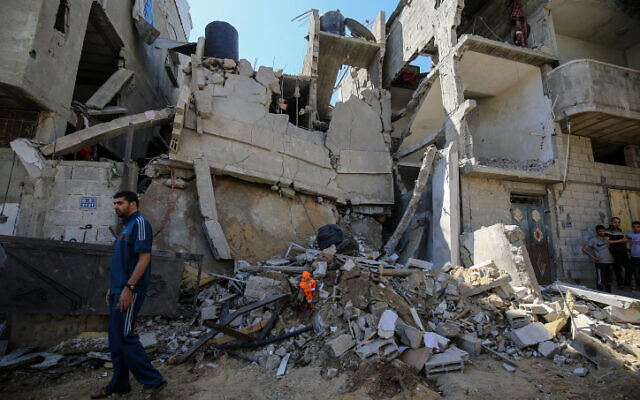 Palestinians inspect the damage following an Israeli air strike in Rafah in the southern Gaza Strip, on May 19, 2021 (Abed Rahim Khatib/Flash90)

The Israeli Foreign Ministry and its Defense Ministry liaison to the Palestinians declined to comment further.

At the same time, in order to keep the southern front quiet, Israel has allowed Qatar to transfers hundreds of millions in cash into the Gaza Strip, straight to its Hamas allies. The funds, which range from fuel subsidies to stipends for impoverished Gazan families, are overseen far less closely than the construction materials.

It’s unclear whether the reconstruction mechanism will remain in place as Gaza sets about rebuilding again, but Israel has signaled it may seek additional concessions.

Gantz said Sunday that Israel would not permit a full reconstruction of Gaza until Hamas returns two Israeli civilians and the remains of two soldiers that have been held captive by the terror group for over six years. 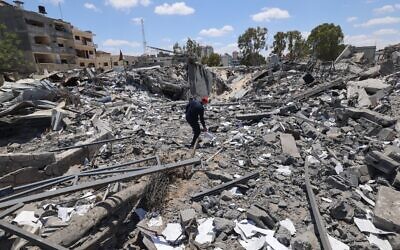 A Palestinian policeman walks on the rubble of Arafat City, Gaza’s Hamas police headquarters in Gaza City on May 22, 2021 (Emmanuel DUNAND / AFP)

The United States has said it will seek to coordinate aid through the United Nations and the Palestinian Authority, similar to the 2014 mechanism. US President Joe Biden has said that the aid will be distributed “in a way that benefits the people [in Gaza] and not Hamas.”

Qatar has bankrolled much of the reconstruction effort since 2014, and is likely to again play a leading role. Egypt, key in brokering the ceasefire between Israel and Hamas, has said it will also send $500 million in aid to help reconstruct the Gaza Strip.

But some observers fear that other donor countries, who have poured billions into development projects in the repeatedly bombarded coastal enclave, will hesitate to fund the next round of reconstruction only to see the projects reduced to rubble again.

“How long will donors gather to fund their investments in Gaza only to see them destroyed? Some of what they built after 2014 was destroyed this time around,” a Gaza-based political analyst speculated in a phone call.

Some of those countries, such as Saudi Arabia and the United Arab Emirates, have also increasingly aligned against Hamas in recent years. Many American allies, especially in the Gulf, share Washington’s view of the group as a terrorist organization aligned with Iran, their regional foe.

In a briefing with reporters on Monday, a senior State Department official said that the international community, including the US, was still committed to funding Gaza’s reconstruction. The US is in close contact with its Arab Gulf allies to ensure that the funding for the reconstruction goes forward, the official said.

“We’re going to do everything that we can to ensure that this assistance reaches the people who need it the most,” the senior official said.

But they also acknowledged some fatigue among donors, calling it “understandable” after a decade and a half of conflict. The official said reconstruction discussions were still in their early stages.

“The United Nations hasn’t even completed its back-of-the-envelope assessment yet in terms of the needs, and they’ll be going into Gaza, and continue…to conduct these assessments in the days ahead,” the official said.

Nonetheless, the official vowed, “We will get the job done.”