PARIS — Lebanon’s leaders “owe their people the truth” about the massive blast that claimed hundreds of lives in Beirut last year, French President Emmanuel Macron said on the anniversary of the disaster Wednesday.

“I think that Lebanese leaders… owe their people the truth and transparency,” Macron said at the start of a UN-backed donor conference for Lebanon, which he is chairing over a video link-up with several world leaders.

The August 4, 2020, explosion in the Beirut port killed at least 214 people, traumatizing the nation and bringing an already stuttering Lebanese economy closer to the brink of collapse.

Macron aims to raise at least $350 million in emergency aid for the battered Lebanese population.

US President Joe Biden, Egyptian President Abdel Fatah el-Sissi and Lebanon’s own President Michel Aoun are among the participants from around 40 countries and organizations taking part in the conference.

Fuel, medicine and food have all grown scarce in Lebanon in recent months, but bickering between the country’s political parties has held up the formation of a new government, delaying a much-needed international bailout.

White roses are seen on portraits of victims of last year’s Beirut port blast in the Lebanese capital, as Lebanon marks on August 4, 2021 a year since a cataclysmic explosion ravaged the city. (JOSEPH EID / AFP)

Macron led the round of donor pledges with a promise of 100 million euros ($118 million) from France.

But he had stern words for Lebanon’s leaders, accusing them of “deliberately letting things fester.”

“I think it’s a historic and moral mistake,” he said, warning that — although the donor aid would come with no conditions attached — there would be “no blank cheque for the Lebanese political system.”

Donors have pledged millions in emergency relief for Lebanon but conditioned a broader rescue plan on Lebanese politicians forming a government that commits to tackling rampant corruption, among reforms.

Lebanon has been without a permanent government for all of the past year.

Najib Mikati, the billionaire businessman recently appointed prime minister, had hoped to form a cabinet by the anniversary of the blast but squabbling over cabinet posts continues.

“There is no still no progress on the formation of a government or the implementation of urgent reforms. Given the dramatic deterioration of the economic situation, this is irresponsible,” said German Foreign Minister Heiko Maas, who is taking part in the donor conference. 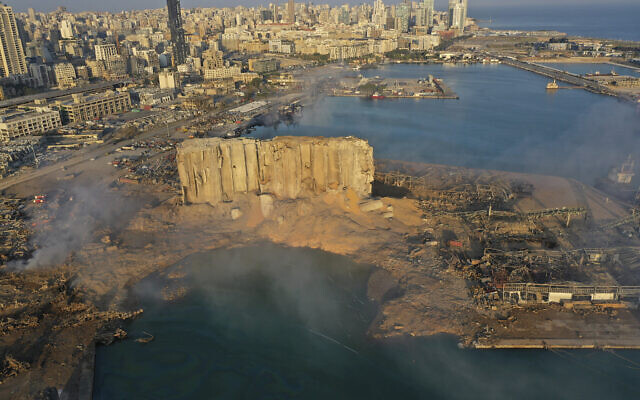 Smoke rises after an explosion the previous day at the seaport of Beirut, Lebanon, August 5, 2020. (AP Photo/Hussein Malla)

The EU said last week it was ready to impose sanctions on members of the ruling elite who obstruct attempts to improve governance and public sector accountability.

France has already barred several Lebanese officials from its territory, without publicly naming them.

One of the chief demands of the Lebanese population and the international community has been that top officials be investigated over the warehouse fire that triggered the port blast.