Macron began his visit to Mosul by touring the Our Lady of the Hour Church, a Catholic church that was badly damaged during IS rule that lasted from 2014 until the extremists’ defeat three years later. Iraqi children dressed in white and waving Iraqi and French flags sang upon Macron’s arrival.

It was the same church where Pope Francis led a special prayer during a visit to Iraq in March. During that trip, the Pontiff urged Iraq’s Christians to forgive the injustices against them by Muslim extremists and to rebuild as he visited the wrecked shells of churches.

Macron moved around the church — whose walls are still riddled with bullets — amid tight security as a priest accompanying him gave him details about the church built in the 19th century. The French president then went up to the roof overlooking parts of Mosul accompanied by Iraqi officials.

“We hope that France will open a consulate in Mosul,” Iraqi priest Raed Adel told Macron inside the church. He also called on the president to help in the reconstruction of Mosul’s airport.

Macron left the church in the early afternoon and headed to Mosul’s landmark al-Nuri mosque, which was blown up in the battle with IS terrorists in 2017 and is being rebuilt.

French President Emmanuel Macron (C) tours the Our Lady of the Hour Church in Iraq’s second city of Mosul, in the northern Nineveh province, on August 29, 2021. (Zaid AL-OBEIDI / AFP)

The mosque, also known as The Great Mosque of al-Nuri, and its iconic leaning minaret were built in the 12th century. It was from the mosque’s pulpit that IS’s self-styled caliph, Abu Bakr al-Baghdadi, declared the caliphate’s establishment in 2014.

Mosul, Iraq’s second-largest city, became IS’s bureaucratic and financial backbone. It took a ferocious nine-month battle to finally free the city in July 2017. Between 9,000 and 11,000 civilians were killed, according to an Associated Press investigation at the time, and the war left widespread destruction. Many Iraqis have had to rebuild on their own amid a years-long financial crisis.

The traditionally Christian towns dotting the Nineveh Plains of the north emptied out in 2014 as Christians — as well as many Muslims — fled the Islamic State group’s onslaught. Only a few have returned to their homes since the defeat of IS in Iraq was declared four years ago, and the rest remain scattered elsewhere in Iraq or abroad. 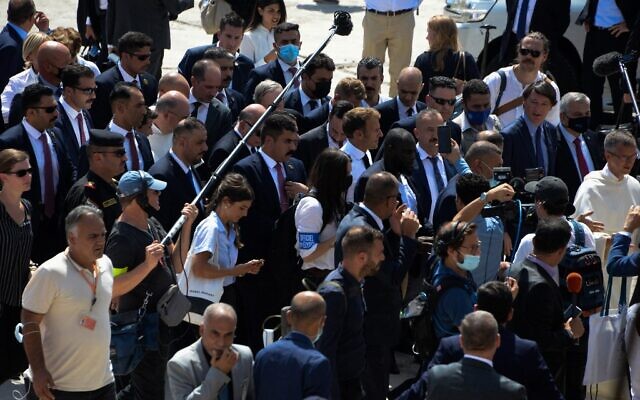 French President Emmanuel Macron (C) tours the Our Lady of the Hour Church in Iraq’s second city of Mosul, in the northern Nineveh province, on August 29, 2021. (AFP)

Macron arrived in Baghdad early Saturday where he took part in a conference attended by officials from around the Middle East aimed at easing Mideast tensions and underscored the Arab country’s new role as mediator.

Macron hailed the Baghdad conference as a major boost for Iraq and its leadership. The country had been largely shunned by Arab leaders for the past few decades because of security concerns amid back-to-back wars and internal unrest, its airport frequently attacked with rockets by insurgents.

Macron vowed to maintain troops in Iraq “regardless of the Americans’ choices” and “for as long as the Iraqi government is asking for our support.” France currently contributes to the international coalition forces in Iraq with 800 soldiers.

On Saturday night, Macron visited a Shiite holy shrine in Baghdad before flying to the northern city of Irbil, where he met Nobel Peace Prize laureate Nadia Murad, a 28-year-old activist who was forced into sexual slavery by IS fighters in Iraq.

A member of Iraq’s Yazidi minority, Murad was among thousands of women and girls who were captured and forced into sexual slavery by IS in 2014. Her mother and six brothers were killed by IS fighters in Iraq. She became an activist on behalf of women and girls after escaping and finding refuge in Germany and shared the Nobel Peace Prize in 2018.