MELBOURNE, Australia — A former principal of a Jewish ultra-Orthodox school accused of child sexual abuse will remain in custody ahead of her pre-trial hearing in September after appearing in an Australian court Friday.

Malka Leifer, a dual Israeli-Australian citizen who was extradited to Australia in January, faces 74 charges of sexually abusing children while working as a religious studies teacher and principal at the Adass Israel School in Melbourne.

Appearing via video link at Melbourne Magistrates’ Court, Leifer did not apply for bail and will remain in custody ahead of a five-day committal hearing which was set to begin on September 13.

Wearing a white headscarf, Leifer only spoke once to confirm that she could hear proceedings.

The scheduled hearing, which will determine whether Leifer faces a criminal trial in a higher court, will hear evidence from 10 witnesses, with some appearing remotely from Israel, the court heard.

According to official documents, the charges against her include rape, indecent assault, and child sexual abuse alleged to have occurred between 2004 and 2008.

Her alleged victims are three sisters Nicole Meyer, Dassi Erlich, and Elly Sapper who publicly identified themselves in their push for Leifer to face charges.

Leifer, now in her 50s, fled Australia for Israel after allegations against her surfaced in 2008, moving with her family to the Emmanuel settlement in the West Bank.

The drawn-out saga tested Jerusalem’s relations with Canberra. Frustration in Australia — which registered its interest in Leifer’s swift return at the highest levels of Israel’s government — peaked in 2019 when allegations came to light that Israel’s then-deputy health minister, Yaakov Litzman, was pressuring state psychiatrists to diagnose Leifer, who fled to Israel in 2008, as mentally unfit to face justice. 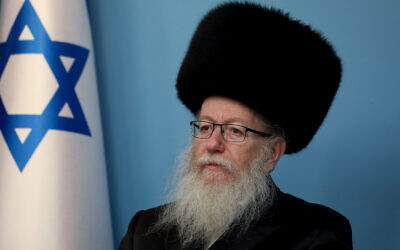 Then-health minister Yaakov Litzman at a press conference about the coronavirus at the Prime Minister’s Office in Jerusalem, March 11, 2020. (Flash90)

The accusations came in light of the fact that the physician assigned to the case had changed his assessment three times regarding Leifer’s mental state. Police recommended that Litzman be indicted for his alleged conduct involving the case.

Leifer left Israel to take a job at Adass Israel in Melbourne in 2000. When allegations of sexual abuse against her began to surface eight years later, members of the school board purchased the mother of eight a plane ticket back to Israel, allowing her to escape before charges were filed.

She arrived in Melbourne on a flight in late January after six years of legal wrangling in Israel, including over whether she was feigning mental illness to avoid standing trial in Australia. 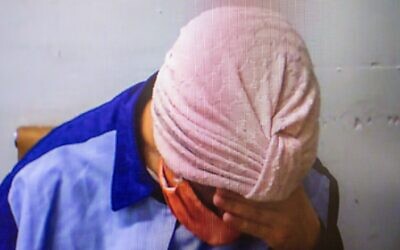 Malka Leifer, a teacher wanted in Australia for child sex abuse, seen on a screen via a video link during a court hearing at the Jerusalem District Court on July 20, 2020. (Yonatan Sindel/Flash90)

A first extradition attempt failed after Leifer was admitted to mental health institutions and experts declared her unfit to stand trial.

Undercover private investigators later filmed her living a normal life, prompting Israeli authorities to probe into whether she was faking mental illness, leading to her re-arrest in February 2018.