A 55-year-old man was killed on Saturday in a rocket strike on the Tel Aviv suburb of Ramat Gan, as cities and communities in the center and south of Israel were battered by barrages of rockets.

According to Channel 12 news, the man did not have a protected area in his home and was unable to reach a bomb shelter in time.

Images from the scene showed widespread destruction as the projectile slammed into the residential area.

Several other people suffered light injuries as two rockets hit the city during barrages which saw dozens of projectiles fired at high-density urban areas in the center of the country.

Members of Israeli security and emergency services work on a site hit by a rocket fired from Gaza in Ramat Gan, where an Israeli man was killed, on May 15, 2021. (Oren ZIV / AFP)

A rocket hit an open area in the central city of Rishon Lezion, as well as in the Arab town of Taibe, northeast of Tel Aviv. There were no reports of casualties in those locations.

Footage later emerged of people fleeing the beach in Tel Aviv as sirens wailed across the city, warning of the incoming fire.

Some two hours after the barrages, the Israel Defense Forces warned the occupants of the Al Jalaal tower in Gaza used by international news organizations that it was set to be destroyed.

After felling the structure, the IDF said the high-rise building housed “military assets” used by the military intelligence wing of the Strip’s Hamas rulers.

The IDF accused the terror group of “hiding behind” the offices of the press outlets in the Al Jalaa tower and “using them as human shields.”

“The Hamas terror group intentionally locates its military assets in the hearts of civil populations in the Gaza Strip,” the IDF said, noting it warned those in the building before the strike and says it gave them sufficient time to clear out. 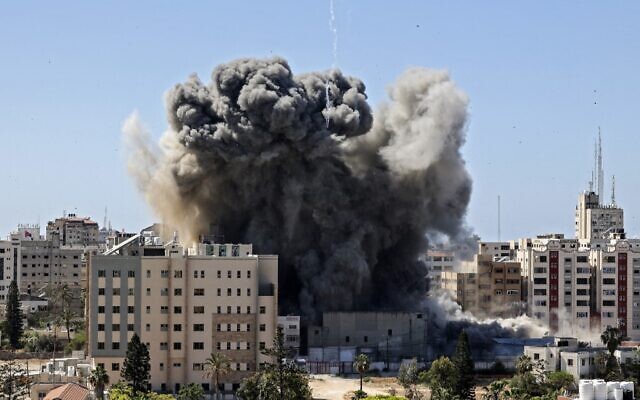 A thick column of smoke rises from the Jala Tower as it is destroyed in an Israeli airstrike after the IDF warned the occupants to leave, Gaza City, May 15, 2021 (MAHMUD HAMS / AFP)

In response to the flattening of the tower, Abu Obeida, the spokesman of Hamas’s military wing, threatened to target Tel Aviv and the center of the country in revenge.

“After the bombing of the civilian tower in Gaza, residents of Tel Aviv and the center must be on standby,” the Izz ad-Din al-Qassam Brigades’ spokesman said.

Hamas said the rocket fire toward the center of the country throughout the day was in response to the killing of a Palestinian family of 10 in Gaza overnight, eight of whom were reported to have been children.

Israeli military sources, quoted by Israel’s Channel 12 news on Saturday, said “senior Hamas figures” were meeting in the building at the time, and it was “not clear” how many of them were among the dead.

It was the deadliest single strike since Israel’s battle with Gaza’s Hamas rulers erupted earlier this week. 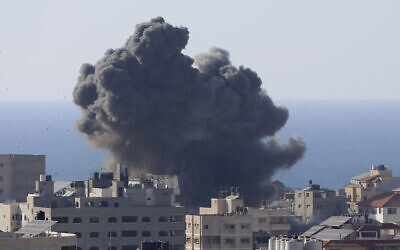 The prime minister’s Arab-language spokesman tweeted that Hamas was to blame for the deaths.

“Hamas targets civilians deliberately. It fired up till now 2300+ rockets at Israeli cities, aiming to kill thousands of Israelis. At the same time, it hides behind Palestinian civilians and used them as human shields,” Ofir Gendelman tweeted. “That’s a double war crime.”

The IDF said the details of the strike were under review.

In addition to the rocket fire at the center of the country, several heavy waves of projectiles targeted Ashkelon, Ashdod, Beersheba and the communities surrounding the Gaza Strip throughout the course of Saturday. There were no reports of injuries in those attacks, although there was damage. 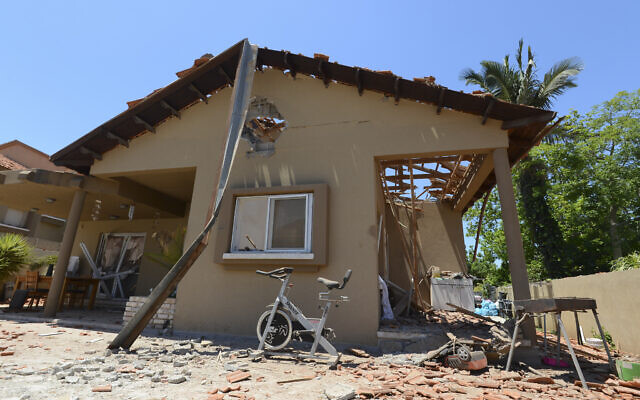 Damage to a house in the Israeli city of Sderot which was hit by rockets fired from Gaza. May 15, 2021 (Avi Roccah/Flash90)

The IDF said Saturday that Palestinian terrorists in the Gaza Strip have fired roughly 2,300 rockets and mortar shells toward Israel since the outbreak of fighting on Monday.

The military said at least 380 of the projectiles failed to cross the border and landed within the coastal enclave. According to the IDF, approximately 1,000 of the projectiles, which were heading toward populated areas, were intercepted by the Iron Dome missile defense system.

Additionally, the military said Saturday its forces shot down another explosives-carrying drone that flew into Israeli territory from Gaza, the fifth since Wednesday.

Ten Israelis, including a young child, have been killed in the rocket fire, and hundreds have been injured. 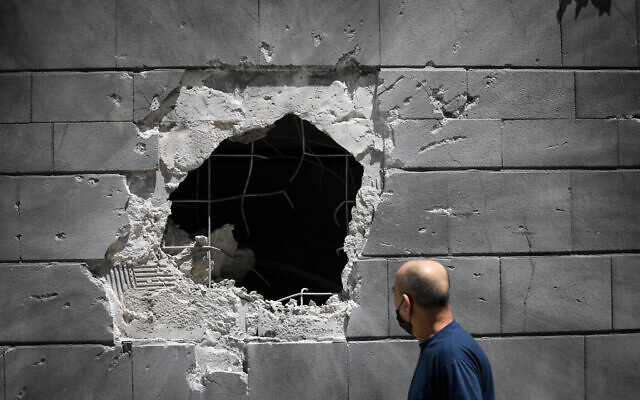 Israelis walk past damage caused to a building in the southern israeli city of Ashkelon, after it was hit by a rocket fired from Gaza into Israel, last night. May 14, 2021. Photo by Yonatan Sindel/FLASH90

In Gaza, the toll from the fighting climbed to 139 on Saturday, including dozens of children, with over 1,000 wounded, according to the Hamas-run health ministry. The Hamas and Islamic Jihad terror groups have confirmed 20 deaths in their ranks, though Israel says that number is much higher and that dozens of those killed were terrorists. In addition, the IDF says some deaths were caused by errant rockets fired at Israel which fell short of their targets and landed in the Strip.

Saturday’s barrages came after the Israeli military continued to strike numerous targets in the Gaza Strip, taking out rocket-launching sites, terror cells and a Hamas intelligence center, according to the Israel Defense Forces.

Several terror cells were hit on their way to launch rockets, the IDF said. Other targets hit included a tunnel shaft located at a beachside hotel, “operational apartments” of Hamas naval forces, two homes of Hamas commanders used as command posts in the past and weapons warehouses. Among the equipment stored in the latter were paragliders for use in aerial infiltration attempts.

One of the rockets fired from Gaza in the middle of the night made a direct hit on an apartment building in Ashdod, while another landed in the Ashdod port, hitting a fuel reservoir and causing a massive explosion that sent huge flames into the night sky. No injuries were immediately reported in either incident.

A rocket also directly hit a home in Beersheba, causing no casualties. Nineteen people were hospitalized in the city’s Soroka Medical Center — 16 of them lightly hurt while running to shelters, and three suffering from shock.

Some of the rockets were intercepted by the Iron Dome anti-missile system while others landed in open areas.

A diplomatic source familiar with efforts to broker a ceasefire between Israel and Hamas said Friday that the sides could come to an agreement within days, amid intensive efforts to halt nearly a week of deadly conflict. The source, who spoke to The Times of Israel on condition of anonymity, said mediators had expressed cautious optimism for a halt within days. 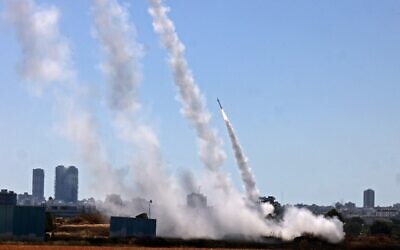 Israel’s Iron Dome aerial defense system is activated to intercept a rocket launched from the Gaza Strip, on May 12, 2021. (EMMANUEL DUNAND / AFP)

The assessment among negotiators was based on experience brokering ceasefires to end previous rounds of violence between the sides and a “clear reading of the room,” the diplomat said.

Hamas political leader Khaled Mashaal told a Turkish news agency Friday that the Gaza terror group is ready for a ceasefire but has not received a response from Israel.

Prime Minister Benjamin Netanyahu said Friday that Israel had no plans to relent in its attacks against Hamas in Gaza, as the military kept up its bombardment of terrorists in the Palestinian enclave and rockets rained down on Israeli cities.

“I said we would strike Hamas and other terror groups with significant blows, and we are doing so,” Netanyahu said. “Hamas leaders think they can escape from our grasp. They cannot escape. We can reach them everywhere — all of [Hamas’s] people — and we will continue to do so.”