A man was sentenced to life imprisonment plus an additional 15 years behind bars on Sunday at the Tel Aviv District Court for the rape and premeditated murder of his former wife’s 12-year-old daughter.

Before his conviction in October, Eritrean migrant Tesfebarhan Tesfasion admitted, as part of a plea deal, to the rape of Sylvana Tsegai before killing her.

The court Tesfasion a life sentence for the murder and an additional 15 years for the rape.

According to court papers, the young victim, Sylvana Tsegai, fought back against Tesfasion in the 2018 attack, scratching at his face and trying to push him off, as he raped her and then strangled her to death.

Tesfasion spent two days on the run after the killing before he was arrested in Tel Aviv.

Court papers showed that Tesfasion was married to Tsegai’s mother between April 2016 and June 2018 and carried out serious physical assaults on her during that time.

After the pair divorced, Tesfasion’s ex-wife rejected his attempts at reconciliation, even changing the locks on her apartment and the building’s entrance to prevent him from gaining access.

In the days before the killing Tesfasion followed his ex-wife, and at one point gained entry to the apartment and took some documents away while Tsegai was there.

At the time, Tsegai called police to complain, but did not report any violence by her mother’s ex-husband.

According to prosecutors, hours before the killing Tesfasion approached Tsegai’s mother outside the apartment building but she refused to speak to him. He then called her from a public phone and said, “Don’t worry, I’ll show you, don’t worry.”

Around noon on November 26, knowing that Tsegai would return from school and would be alone in apartment, Tesfasion climbed onto the roof of an adjacent building and waited for her to arrive. At around 3 p.m. he saw that the apartment door was open, jumped across from the neighboring roof and entered the apartment. 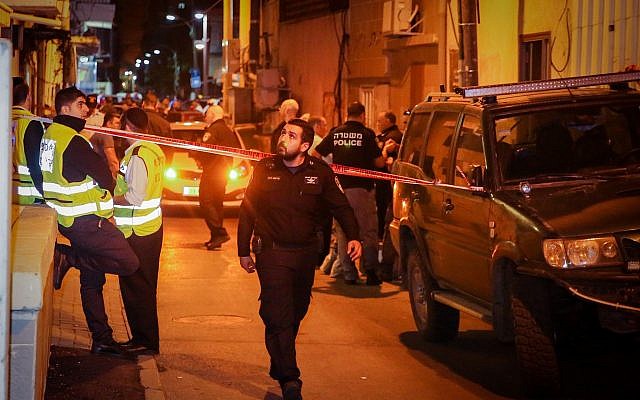 Police and medical personnel outside the home of Sylvana Tsegai, after she was found dead on November 26, 2018. (Flash90)

Inside he assaulted Tsegai, threw her on a bed and raped her, prosecutors said.

That evening, Tsegai’s mother, who was working, became concerned that she had not heard from her daughter. After making frantic phone calls to find anyone who may know where she was, she asked to leave work and return home, fearing that Tesfasion may have harmed her daughter. Her employer escorted her to the building, where they found Tsegai’s body.

Tesfasion entered Israel in 2010 through the Egyptian border and was known to authorities for previous offenses.

Tsegai’s death, coming hours after the discovery of the body of another murdered teen, 16-year-old Yara Ayoub, prompted a wave of protests opposing violence against women and demands that the government do more to tackle the problem.