Following the deadly stampede during Lag B’omer celebrations at Mount Meron Thursday night, more than two thousand Israelis donated blood at locations throughout the country on Friday. Magen David Adom on Saturday asked the public to continue doing so during the coming weeks.

Among the 2,208 Israelis who showed up at the MDA mobile units was Prime Minister Benjamin Netanyahu, who arrived at a blood donation station near the Shaare Zedek Medical Center in Jerusalem on Friday afternoon.

On Thursday night at least 45 Jewish worshipers were crushed to death and more than 150 people hurt, including many critically, in a stampede at a mass gathering at Mount Meron.

“Magen David Adom would like to thank the public for their extensive and emotional response, in just a few hours, and reminds that the blood unit collected is intended to save the lives of those injured in the festival in Meron and other patients hospitalized in hospitals across the country,” the organization said in a statement.

“The blood unit is only valid for 35 days and therefore the MDA blood services ask the public to continue to come and donate blood during the coming weeks,” they added.

One donor told Channel 12 news on Friday that said she waited for two hours to donate, but felt that it was important to stay in light of the deadly disaster.

The tragedy occurred when more than 100,000 people were attending the annual gathering on Thursday night, which includes visits to the gravesite of the second-century sage Rabbi Shimon Bar Yochai and massive bonfires on the mountainside. 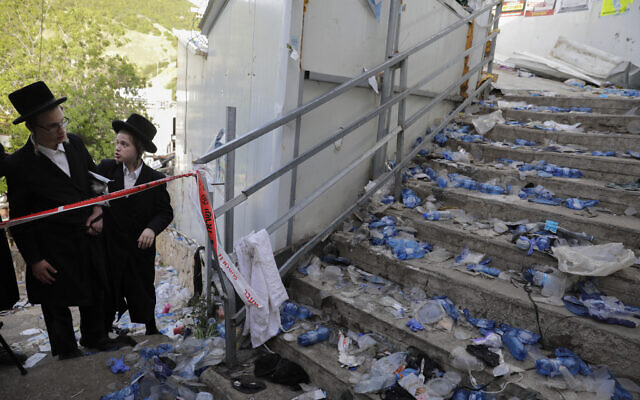 Ultra-Orthodox Jews stand at the bottom of a staircase, leading from a narrow walkway where a stampede led to mass fatalities at Lag B’Omer celebrations at Mt. Meron in northern Israel, Friday, April 30, 2021. (AP Photo/Sebastian Scheiner)

For more information on donating blood, readers can visit the MDA website (Hebrew) or call 03-9101101.