Israel made the abrupt annual transition from mourning to jubilation on Wednesday night, as Memorial Day drew to a close and its 73rd Independence Day began.

Local authorities around the country held Independence Day events in person, after events last year were mostly canceled or went online due to the nationwide virus lockdown. Now, the plummeting infection rate has allowed for most restrictions to be lifted, though some limits on gatherings remain in place.

All participants will be required to carry a “Green Pass” — evidence of full vaccination against COVID-19 or of recovery from the coronavirus.

“We went through four difficult election cycles. This long period of instability, of uncertainty, harms us all. This is the time to mend the rifts. Even when our opinions are at odds with each other we are still two sides of the same coin, one nation. This Independence Day is the right moment,” Levin said.

He also gave a statement in Arabic, saying, “This holiday is for all Israelis.”

The prime minister does not usually speak at the official Independence Day event, but Netanyahu circumvented the traditional limitation by having organizers air a video he narrated, in which he feted the diminishing pandemic in Israel and a return to semi-normalcy.

“We’ve been through a difficult year of a pandemic and we got through it together. Again, we discovered how strong our nation is and how, at the moment of truth, we all came together to protect life, and return to life,” Netanyahu said.

“Let’s shine together for the life of the nation and how good it is, religious and secular, Jews and Arabs. Together we dreamed, together we fulfilled [those dreams], together we won,” he said.

Following last month’s inconclusive election, Israel’s fourth in two years, political leaders are widely believed to be jockeying for position ahead of another potential election cycle.

“We must remember that we are one, strong, big and diverse family. We have a shared destiny. A new Israeli and Jewish Hope must be based on unity and diversity, on mutual understanding and shared experiences,” Rivlin said.

Pfizer CEO Albert Bourla spoke via video link and was hailed as a Jewish hero for his company’s vaccines during the pandemic. Israel relied on Pfizer shots almost exclusively in its world-leading vaccination campaign.

“I am honored that you have chosen to pay tribute to Pfizer at this Independence Day ceremony. Along with Jews around the world, I take immense pride in Israel,” Bourla said. “This year the partnership between Pfizer and Israel produced yet another groundbreaking achievement. Together we are demonstrating that through mass vaccination we can defeat the COVID-19 pandemic and save lives.”

Torch-lighters at the main event included doctors and nurses representing medical teams who have been at the frontlines of battling the coronavirus pandemic; Rabbi Eitan Schnerb, whose daughter Rina was murdered in a 2019 terror attack in the West Bank and who founded a non-profit aiding the needy in the city of Lod; Shira Isakov, who survived a murder attempt by her husband and has become a vocal advocate against violence toward women, alongside the neighbor who helped save her life; Abie Moses, head of an organization that helps victims of terror attacks; Major Maor Cohen, who volunteers with children with cancer; Zipi Harpenes, a school principal in Beersheba; Gabriela Sztrigler Lew, who volunteers in the Shalom Corps doing community work around the world; and others. 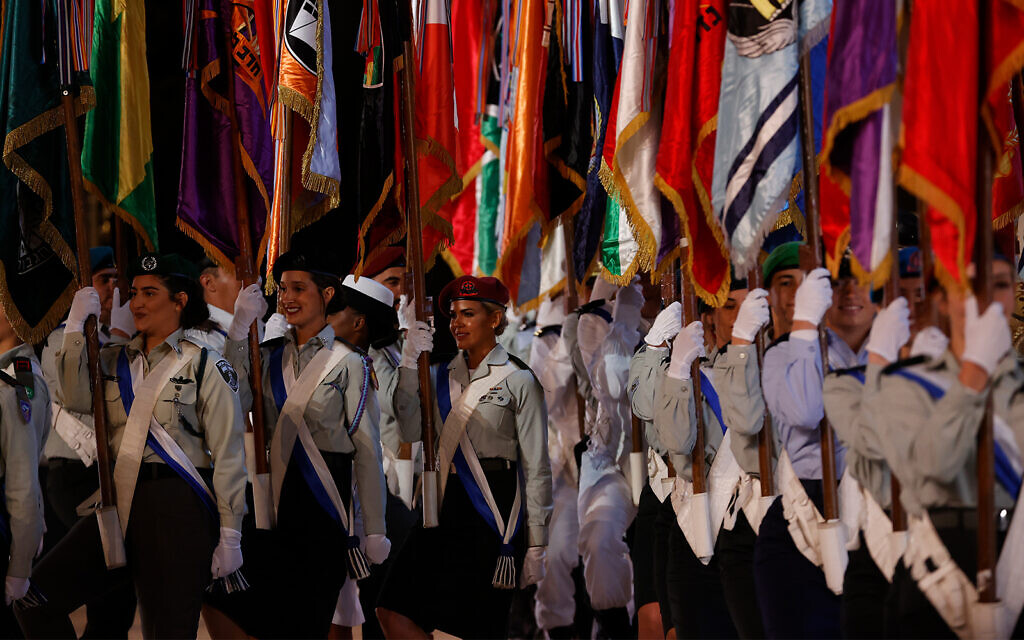 The celebrations will continue on Thursday with public events and private gatherings that typically include visits to beaches, parks and outdoor cookouts.

On Wednesday morning and early afternoon, Air Force aircraft will do a flyover of much of the country, a popular and iconic feature of celebrations.

This year’s flyover will pass over more towns than usual, “to salute all the citizens of Israel,” a spokesperson for the military said.

Unlike last year, crowds will be allowed to gather to watch the jets and other military aircraft zoom by following the major lifting of coronavirus restrictions.

In 2020, during the onset of the coronavirus pandemic in Israel, the aerobatics performance saluted medical staff over the nation’s hospitals.

A flotilla will sail down the Mediterranean coastline between Herzliya and Tel Aviv.

Municipalities will be permitted to hold Independence Day celebrations for the vaccinated. In locales with limited risk of infection, depending on the size of the venue, up to 3,000 vaccinated people will be allowed to gather indoors, 5,000 outdoors. 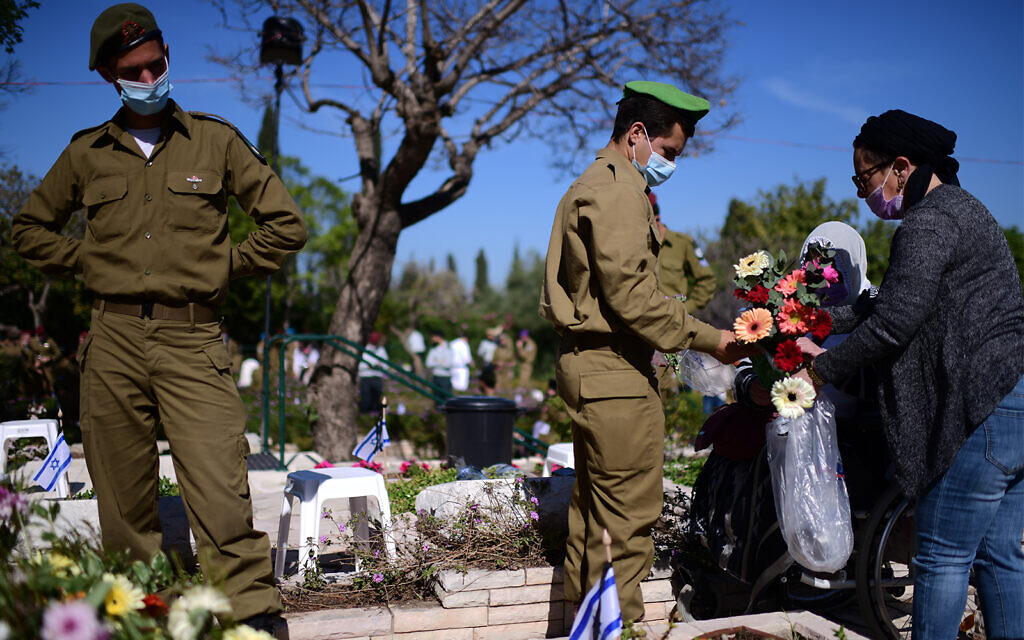 The juxtaposition of Memorial Day and Independence Day is a key element of Israelis’ experience of their country’s anniversary, ensuring that no commemoration excludes the sacrifice of the fallen and their families, and that the elation of independence is never far removed from an awareness of its cost.

The sudden switch is seen as a difficult transition for many bereaved families.

This year’s Memorial Day had the bittersweet distinction of marking a year with the fewest deaths caused by nationalistic violence in Israel’s history, but was marred by a veteran’s self-immolation outside a Defense Ministry office.

Three Israelis — a soldier and two civilians — were killed in terrorism or defense of the country in the past year, by far the lowest annual toll in Israel’s history.

A total of 23,928 people were recognized as fallen on behalf of the state since 1873 on this year’s Memorial Day.

Over the past year, 112 names have been added to that list — 43 of them active service members and 69 who were recognized as having died of wounds sustained in wars or terror attacks. Those 112 people include those killed in accidents or who died of illness over the past year, as well as people who died years ago but have only now been officially recognized as having died of injuries related to their military service or an attack. 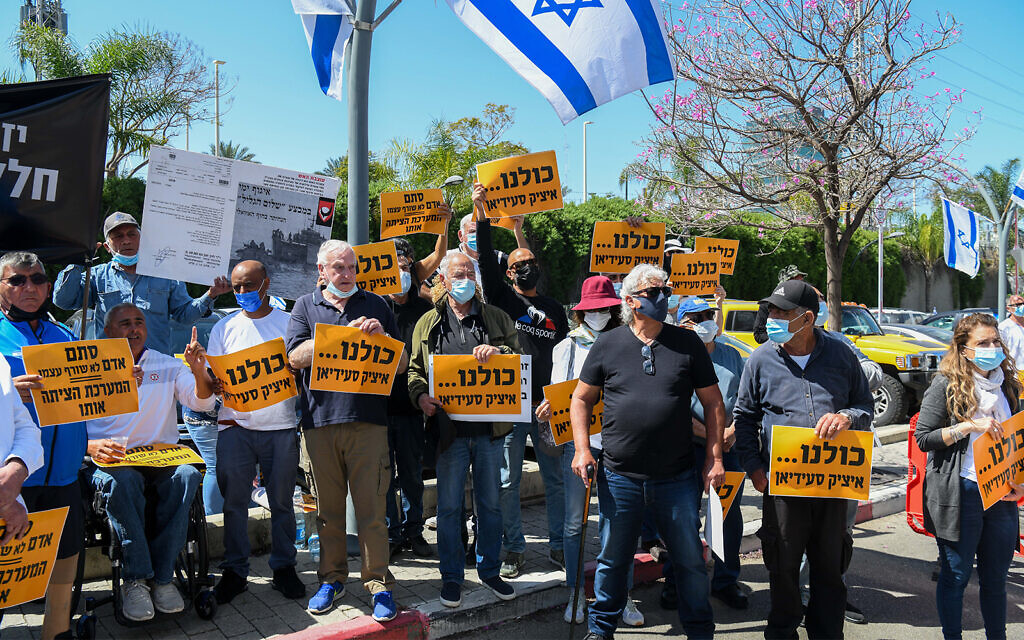 Protesters hold signs reading, ‘We are all Itzik Saidyan,’ outside the Defense Ministry’s Rehabilitation Department in Petah Tikva, April 14, 2021. (Flash90)

Ahead of Memorial Day, on Monday, IDF veteran Itzik Saidyan, 26, set himself alight in an apparent act of protest and desperation that shocked the country and drew attention to the plight of traumatized veterans.

He arrived at the Rehabilitation Department’s offices in Petah Tikva with a bottle full of a flammable liquid, doused himself with it, and then set himself on fire in the entryway, the Defense Ministry said.

Saidyan remains in critical condition. The IDF Veteran’s Association said that Saidyan was frustrated over his treatment by authorities. He was recognized by the Defense Ministry as having 25 percent disability from his post-traumatic stress disorder, but had requested 50% recognition. The ministry had refused, saying at least a portion of his condition was due to childhood trauma, not his military service.

Saidyan served in the Golani infantry brigade during 2014’s Operation Protective Edge. He participated in the Battle of Shuja’iyya, a neighborhood in Gaza City that saw some of the fiercest clashes in the conflict.

Defense Minister Benny Gantz and Defense Ministry Director-General Amir Eshel ordered an investigation of the incident in order to determine what prompted Saidyan’s actions and what steps the ministry can take immediately, the ministry said.

Saidyan’s plight sparked protests, calls for reform and was a top story on news coverage throughout the holiday. Netanyahu, Rivlin, Gantz and IDF Chief of Staff Aviv Kohavi expressed their grief over the incident.