Though the investigation into the deadly disaster at Mt. Meron on Thursday night was still in its earliest stages as the weekend ended, recriminations from multiple current and former officials in top governmental positions pointed to one major, key failing: No one could say who was ultimately in charge of managing and securing Israel’s second most popular Jewish holy site.

Following the crush that took the lives of 45 people during Lag B’Omer celebrations, and under intensifying public, political and media scrutiny of the chain of events that led to disaster at the gravesite of Rabbi Shimon bar Yochai, a picture has emerged of a facility caught in a years-long tug of war between various authorities, religious sects and interest groups, that left it bereft of proper, unified state oversight even as constant warning bells were being sounded regarding its potential for catastrophe.

Since the disaster, several former police chiefs have characterized Meron as a kind of extraterritorial facility. It was administered by several ultra-Orthodox groups, while the National Center for the Protection of Holy Places, part of the Ministry of Religious Affairs, apparently had some responsibility over it as well, as did the local authority and the police.

But ultimately, no single state body has full responsibility, Liora Shimoni, a senior official at the State Comptroller’s Office, told Channel 13 news on Friday, hours after the disaster. Her office, in its reports — including two very specific warning presentations in 2008 and 2011 — had raised to no avail the acute concern that “no single state authority is responsible for the place.”

Immediate attention following the disaster was turned to police, who ostensibly secured the festivities that ended in tragedy after midnight on Thursday-Friday, but current and former law enforcement officials have rejected the notion that they should be solely or even primarily blamed. These officials have indicated that amid massive political pressure not to limit the annual Meron event, cops had little say over attendance. They could only prepare as best they could every year for the throngs of worshipers to flood the site, and hope for the best.

File: Haredim pray at the tomb of Rabbi Shimon Bar Yochai, on the eve of the new Jewish month of Tamuz. June 23, 2017 (David COhen/FLASH90)

The tragedy occurred as thousands streamed through a narrow walkway that was covered with metal flooring and may have been wet, causing some people to fall underfoot during the rush for the exit. Some apparently fell on the walkway and down a flight of stairs at its end, toppling onto those below and precipitating a stampede and fatal crushing domino effect.

Public Security Minister Amir Ohana, who oversees police, said Saturday night that while he bore overall responsibility for the incident, “responsibility does not mean blame.”

“The disaster that happened this year could have happened any other year,” Ohana said, noting that in fact the number of revelers at the holy site, about 100,000, was far lower this year than in previous years. (The event was canceled in 2020 because of COVID-19, but has drawn hundreds of thousands of participants in the past.) He said the scope of the tragedy went “far beyond the police.”

Northern District Commander Shimon Lavi said on Friday that he bears “overall responsibility” for the disaster as the local police commander. However, an unnamed senior police official told Haaretz on Saturday that “there is a big difference between taking responsibility and blame.”

Speaking on Channel 12 news Saturday, Shlomo Aharonishki, who helmed the force from 2001-4, reinforced characterizations of the Mt. Meron facility as a black hole of accountability, and said the Haredim had ultimate control.

“The police are not in charge of safety” at Meron, he said flatly. 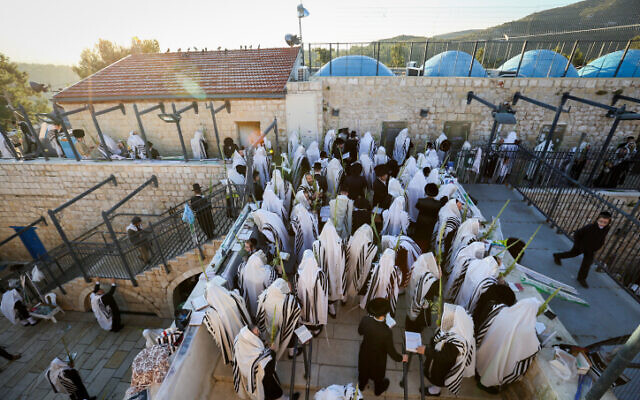 Aharonishki said there were “sighs of relief” every year in his day when the annual Lag B’Omer festivities passed without fatal incident. He and the former police Northern District commander Dan Ronen said there had been concerns for many years about the drastically inadequate infrastructure at the facility, including at the huge tiered outdoor stands where vast numbers of participants gather. Unless there was a full state commission of inquiry, and a subsequent fundamental overhaul of the facility, “the next disaster [at Meron] is already on its way,” Aharonishki warned.

Channel 12’s police reporter Moshe Nussbaum said that as far as he could determine, responsibility for security at the site ultimately rests with the National Center for the Protection of Holy Places, at the Ministry of Religious Affairs. An engineer for the ministry approved security arrangements at the site earlier this week. So far, neither the ministry nor the center have claimed such responsibility.

The state comptroller warned on at least two occasions that the site was dangerously ill-equipped for the hundreds of thousands who regularly attend the Lag B’Omer celebrations there, while an internal police report in 2016 said that the chaos in the site’s management could lead to disaster.

The 2008 state comptroller report warned of “systemic failure at the Rashbi [Rabbi Shimon bar Yochai] compound” at Meron due to “many different authorities all involved in its management,” noting that it was a chaotic situation that would lead to harm to the holy site as well as endangering worshipers. 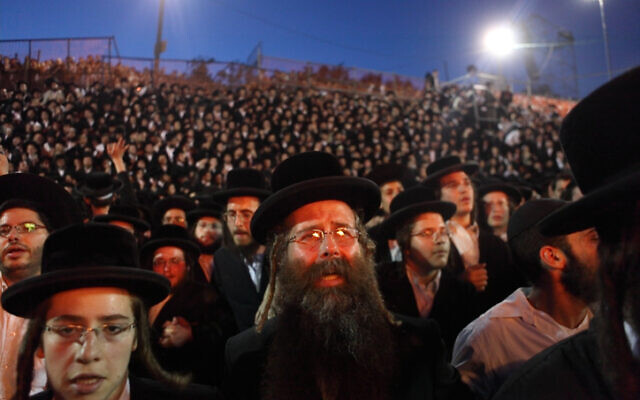 Nevertheless, Haredi leaders continued to press for unfettered access to the site over the years.

Aryeh Deri, the minister of the interior and head of the Shas ultra-Orthodox party, indicated in a Thursday evening radio interview, hours before the Meron tragedy, that he had blocked Health Ministry efforts to impose restrictions on this year’s event, Channel 13 reported Saturday. Those restrictions were apparently more related to COVID concerns than the terrifying annual overcrowding. 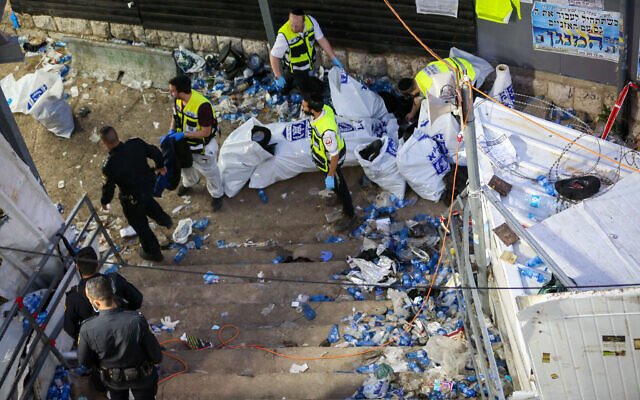 Israeli rescue forces and police at the scene after a stampede during celebrations on Mt. Meron, in northern Israel on April 30, 2021 (David Cohen/Flash90)

In the excerpt from Deri’s interview, the Shas minister said that “not all officials” understand the importance of allowing the mass gatherings to move forward, and that health officials had for weeks been trying to impose restrictions — to prevent the spread of COVID-19 — but he added that “Praise the Lord, we got past this as well.”

Sigal Bar Tzvi, head of Community Policing for Israel Police, told Channel 13 on Friday that the police do not have the authority to limit the number of participants in the gathering on the mountain. “We do what we are told to do, within the framework of our abilities; there is freedom of religious assembly.” 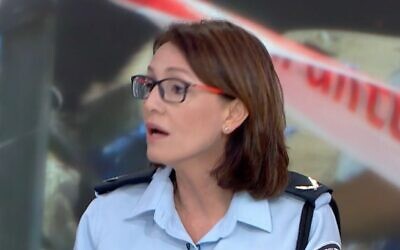 Even though it was “a religious event,” that did not require a license or certain other checks, she said, district commander Lavi had ensured that two safety engineers — the one from the Ministry of Religious Affairs and a second, independent, expert — signed off on the arrangements and that other approvals were obtained.

Still, she said police had warned in the past two weeks “that the event is dangerous,” citing the district commander — an apparent reference to Lavi — who “spoke with who he needed to speak with.” She then said the plans for the event, “including all the dangers… were presented to the minister.” Asked how minister Ohana reacted, she said, “I don’t know. I wasn’t there.”

The lack of a clear show-runner was also evident in comments made by Dr. Sharon Alroy-Prais, the head of public health at the Health Ministry, ahead of the event.

“We worked for weeks on a framework,” Alroy-Prais fumed in a TV interview on Wednesday, a day before the Lag B’Omer festival. “It was approved by all the parties, by the police, by the Religious Affairs Ministry, by the Interior Ministry — everyone. But in the end it fell through because no one would take responsibility for enforcement,” she said, accusing the government authorities of passing the buck. “It’s shameful,” she said. “The Ministry of Religious Affairs tries to get the police to take responsibility, and they hand it back to the Ministry of Religious Affairs.”

Various reports since the tragedy regarding arrangements at the site have revealed that by standard police safety regulations for public gatherings, it should not have been permitted to hold more than about 15,000 people. 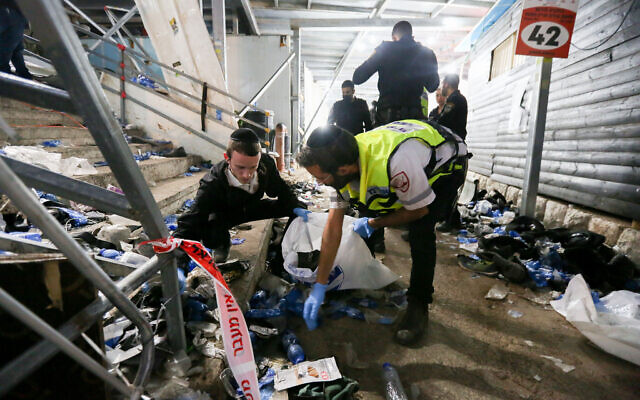 An internal police document also warned of the potential for chaos and disaster at the Meron site. Commander Ilan Mor, head of the operational branch of the national traffic police, produced a report in 2016 titled, “Meron celebrations: Erasing the writing on the wall.” The document analyzed past tragedies caused by overcrowding at public events, including disasters and near-disasters at Meron itself, and concluded that the infrastructure at the holy site could not safely accommodate the numbers of worshipers that attended each year at Lag B’Omer. In 1911, almost 40 years before the foundation of the state, a railing on a crowded balcony railing at the gravesite collapsed, sending dozens of worshippers plummeting some 7 meters downward, with 11 fatalities.

The attorney general announced on Friday that the Justice Ministry’s Police Internal Investigations Department was immediately opening a probe into possible police negligence in the fatal stampede. Attorney General Avichai Mandelblit, in a statement, said “it was decided that the PIID will immediately examine whether there are suspicions of criminality by police in the tragedy in Meron.”

However, there have been growing demands for a state commission of inquiry that would examine all aspects of the case, including the involvement of politicians and governmental failings in bringing the gravesite and wider facility under control. 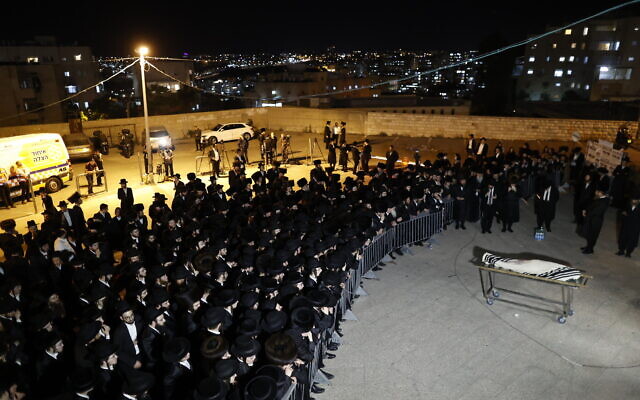 Ultra-Orthodox Jews attend the funeral of a victim of the stampede during Lag B’Omer celebrations on Mount Meron in which 45 were crushed to death, tragedy, in Meron, northern Israel, May 1, 2021. (Yonatan Sindel/Flash90)

Both Aharonishki and fellow former police commissioner Moshe Karadi have called for such an inquiry, and other former senior police officers are preparing to issue a unified plea for such a probe. Defense and Justice Minister Benny Gantz has also reportedly told aides that some kind of public commission of inquiry is required.

An initial police investigation has already shown failings “by all of the parties” that are supposed to have responsibility for the annual event, a Channel 12 news report said.