Millions of Christians around the world on Saturday faced another Easter weekend under restrictions because of coronavirus surges, but the hard-hit United States made good news as it crossed the milestone of 100 million people receiving at least one vaccine shot.

Worrying spikes in infections in many parts of the world, even as vaccine rollouts gather pace, have forced the reimposition of deeply unpopular restrictions.

Italy began a strict Easter lockdown on Saturday, with the entire country deemed a high-risk “red zone” during a time when families usually get together.

At Rome’s normally bustling Piazza Navona, site of the famed Fountain of the Four Rivers, a scattering of dog-walkers and cyclists could be seen enjoying the spring weather.

Shops selling essentials were open in the nearby winding streets, but without the normal throng.

“It’s getting annoying,” a man who gave his name as Giovanni said of the restrictions, as he walked his dog.

Latin Patriarch of Jerusalem Pierbattista Pizzaballa, center left, walks under a canopy as the circles the Holy Sepulchre during Holy Thursday mass in the Old City of Jerusalem, April 1, 2021. (AP Photo/Maya Alleruzzo)

New curbs were also coming into force Saturday in France, where authorities are scrambling to deal with a dramatic rise in cases that has overwhelmed hospitals in Paris.

Restrictions had been already stepped up in other European nations such as Belgium.

Germans protested in their thousands on Saturday amid heated debate throughout the country about tightening restrictions in the face of a third wave of Covid-19.

Marchers, few of whom wore face masks, carried banners with the slogan “End the dictatorship of Covid.” 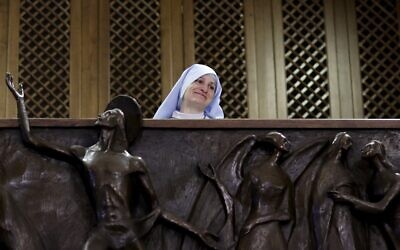 A Catholic nun smiles as she plays the organ during an Easter vigil mass on Holy Saturday, at the Church of the Holy Sepulchre in Jerusalem, on April 3, 2021. (Emmanuel DUNAND / AFP)

The government scrapped plans for a strict Easter lockdown, but Chancellor Angela Merkel urged people to limit their social contacts ahead of the break.

Across the Atlantic, fresh curbs were also imposed ahead of Easter in Ontario and Quebec, Canada’s two most populous provinces.

And in the Philippines, a lockdown affecting more than 24 million people was being extended for another week as authorities deploy tents and health workers to overwhelmed hospitals.

But there was a step towards normalcy in Jerusalem’s Old City, where a lockdown dampened Easter last year.

A modest crowd turned out this year as most major sites opened thanks to Israel’s successful vaccine rollout.

“Last year, it was very hard. We felt like the city was dead,” said Lina Sleibi, a Palestinian Christian who sings at church services in the nearby West Bank holy city of Bethlehem.

The pandemic has claimed more than 2.8 million lives worldwide.

But the United States, the hardest-hit nation, became the first country to administer at least one shot to more than 100 million people — around 40 percent of its adult population. 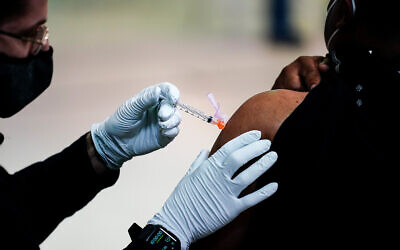 A member of the Philadelphia Fire Department administers the Johnson & Johnson COVID-19 vaccine to a person at a vaccination site setup at a Salvation Army location in Philadelphia, Pennsylvania, March 26, 2021. (AP Photo/Matt Rourke)

President Joe Biden has vowed that all adult Americans will be eligible to receive the vaccine by May 1.

But infections remain on the rise in parts of the country as well, and Biden urged Americans to keep wearing masks and taking other precautions.

“We need to finish this job,” he said.

The US Centers for Disease Control and Prevention has updated its guidance to say that fully vaccinated people can travel without observing quarantines, but should wear masks.

Vaccination campaigns have struggled to gain traction across much of Europe due to supply issues and questions over the AstraZeneca jab.

The Netherlands on Friday became the latest European country to halt AstraZeneca vaccinations for people under 60 over fears of links to rare blood clots.

Britain and the British-Swedish firm itself have defended the jab’s safety, and the World Health Organization and the EU drugs regulator have said that so far the benefits far outweigh the risk. 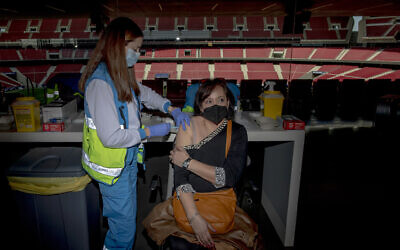 A woman receives a dose of the AstraZeneca vaccine, during a mass vaccination campaign at Wanda Metropolitano stadium in Madrid, Spain, March 24, 2021 (AP Photo/Manu Fernandez)

On Saturday, the UK medical regulator said that out of 30 people who suffered blood clots after receiving the shot in Britain, seven had died.

The 30 reports of thrombosis came after 18.1 million doses of the vaccine had been administered in the country.

Paul Hunter, a medical microbiologist at Britain’s University of East Anglia, told AFP he initially thought the link between vaccination and blood clots was likely a “random association.”

But as evidence mounts of clusters in separate countries, “the weight of evidence is now looking towards Oxford-AstraZeneca actually being the cause of these adverse events,” he said.

West Africa’s Guinea-Bissau launched its vaccination campaign on Saturday with the AstraZeneca vaccine.

One of the worst Covid-19 outbreaks is devastating Brazil, which has reported more deaths than any country after the United States.

It is the epicenter of an unfolding crisis in Latin America, where infections have soared past 25 million, likely fueled by a more contagious variant first detected in Brazil. 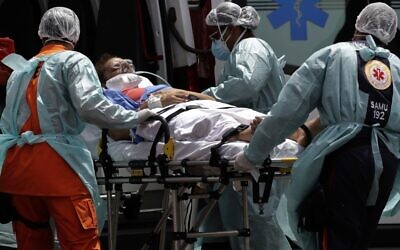 Healthcare workers take on a stretcher a patient suspected of having COVID-19 from an ambulance, at the HRAN public hospital in Brasilia, Brazil, Tuesday, March 23, 2021 (AP Photo/Eraldo Peres)

Peru has gone into an Easter lockdown, Chile has closed all borders, Ecuador announced fresh restrictions and Bolivia sealed the border with Brazil.

Argentina’s President Alberto Fernandez announced late Friday that he had tested positive but was “physically well.” He had the two-shot Sputnik V vaccine from Russia.

In a radio interview Saturday, he said he had “no idea” how he got infected.

“If it were not for the vaccine, I would be having a very bad time,” he said.