MILWAUKEE, United States (AFP) — Giannis Antetokounmpo scored 50 points in an astounding all-around performance and the Milwaukee Bucks captured their first NBA title since 1971 by defeating the Phoenix Suns 105-98 on Tuesday.

The Bucks won the best-of-seven NBA Finals by four games to two, becoming only the fifth team to claim the crown after dropping the first two contests.

Antetokounmpo, only the seventh player in finals history with a 50-point game, added 14 rebounds and five blocked shots as the Bucks went an NBA-best 10-1 at home in the playoffs to end their 50-year title drought.

“I want to thank Milwaukee for believing in me. I want to thank my teammates for playing hard with me,” Antetokounmpo said. “I’m thankful I was able to get it done.”

Two-time NBA Most Valuable Player Antetokounmpo had been questionable for the opener with a hyperextended knee.

But the 26-year-old Greek forward matched Michael Jordan and Hakeem Olajuwon as the only players to take NBA Finals MVP and NBA Defensive Player of the Year awards in the same season.

“He’s a special human being. I’ve learned so much from him. He’s a special leader,” said Bucks coach Mike Budenholzer. “These players are champions every day. They’ve embraced getting better every day.”

An expanded “Deer District” party zone outside the sold-out 20,000-seat arena welcomed 65,000 people watching on videoscreens and they had the celebration they had hoped to enjoy.

“I’m happy I was able to do it with this team for Milwaukee,” said Antetokounmpo. “And Coach Bud says we have to do it again.”

The Suns were foiled in their bid for the first crown in their 53-year history. Phoenix guard Chris Paul, playing in the first NBA Finals of his 16-year at age 36, led the Suns with 26 points.

Giannis Antetokounmpo of the Milwaukee Bucks goes up for a shot against Deandre Ayton and Jae Crowder of the Phoenix Suns during the second half in Game Six of the NBA Finals at Fiserv Forum on July 20, 2021 in Milwaukee, Wisconsin. (JONATHAN DANIEL / GETTY IMAGES NORTH AMERICA / Getty Images via AFP)

“It hurts. Badly,” Suns coach Monty Williams said. “But I’m also grateful we had this chance to play for a championship. The fourth quarter, it was pretty evident we just couldn’t score enough. We just couldn’t convert.”

Relentless Antetokounmpo, an often weak free throw shooter who made 17-of-19 from the line, scored 12 of his 20 third-quarter points in a 16-8 Bucks run that gave Milwaukee a 58-55 lead only 4:34 into the second half.

He was the first with a 20-point quarter in the finals since Jordan and the game hung on a knife’s edge, deadlocked at 77-77 entering the fourth quarter.

Antetokounmpo scored eight for the Bucks in a 10-6 Milwaukee run for a 94-88 lead midway into the fourth quarter and time and again he would answer when the Suns cut into the Bucks’ lead.

Phoenix’s Jae Crowder made two free throws to pull the Suns within 100-96 with 1:14 remaining but Khris Middleton answered with a jumper and added two free throws for an eight-point Milwaukee lead.

“Everybody has got to process this and collect their thoughts,” Paul said after the game. 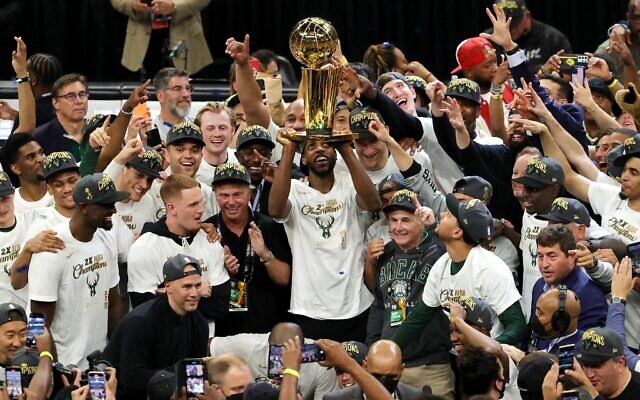 Khris Middleton and members of the Milwaukee Bucks celebrate after defeating the Phoenix Suns in Game Six to win the 2021 NBA Finals at Fiserv Forum on July 20, 2021 in Milwaukee, Wisconsin. (JONATHAN DANIEL / GETTY IMAGES NORTH AMERICA / Getty Images via AFP)

Middleton added 17 points for the Bucks while Bobby Portis had 16 off the Bucks bench and Jrue Holiday had 12 points and 11 assists.

Devin Booker added 19 points for Phoenix while Crowder had 15 points and 13 rebounds for the Suns.

Paul fell to 0-13 in playoff games when game-six referee crew chief Scott Foster officiated. Paul had been critical of Foster after past outings.

The streak included Milwaukee’s win in game three of the finals, in which Antetokounmpo had 17 free throws and the Suns had only 16.