Rioting by Arab Israelis in May that led to deadly ethnic violence between Jews and Arabs took authorities by surprise and was fueled, in part, by organized crime families that are crossing the line between criminal and nationalist crime, Public Security Minister Omer Barlev said Sunday.

May saw massive riots break out in many so-called mixed Israeli cities, home to large numbers of both Arabs and Jews, during an 11-day conflict between Israel and Hamas in Gaza. Though not unprecedented, the internecine violence was some of the worst in Israel’s history, bringing to the surface long-simmering conflicts between Arab and Jewish Israelis.

The outbreak of violence by the Arab population “very much surprised the country, we weren’t prepared for that,” Barlev told a conference on anti-terror policy hosted at the Reichman University in Herzliya (until recently known as IDC Herzliya).

However, he applauded the police response to the violence, in which at least two people were killed and hundreds injured. For days, Jewish and Arab mobs had attacked people and property in communities across the country.

“Israel Police acted correctly, despite all the criticism,” said Barlev, who at the time of the unrest was still an opposition lawmaker. He took over the Public Security Ministry, which is responsible for the police, when the new government was sworn in in June.

Comparing events to similar rioting that happened in 2000, Barlev said that police were able to contain the violence in a reasonable manner, “but that doesn’t mean there aren’t coals sizzling under the surface today that can seriously harm the delicate fabric of Israel.”

Police are seen in Lod during ethnic rioting in the mixed Jewish-Arab city in central Israel, May 12, 2021. (Yossi Aloni/Flash90)

In October 2000, 13 Arab Israelis were killed by police during violent clashes at the dawn of the Second Intifada.

Barlev said that crime families played a role in the May violence and the existence of such organizations “harms the very sovereignty of the country.”

The unrest, he said, revealed “a justifiable crisis in trust between Arab Israeli citizens and state institutes” that has been caused by years of disregard for the hardships of the community.

“The inequality and neglect of the Arab sector constituted a space for the intensification of crime in a disproportionate manner and led to the mixing and crossing of criminal crime into the realm of national crime,” Barlev said. 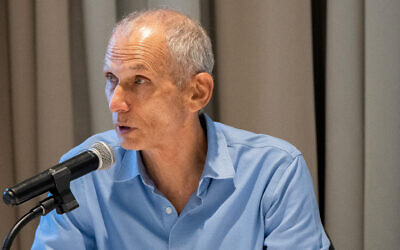 Public Security Minister Omer Barlev visits a business that was a victim of protection racket, in the upper Galilee, between Rosh Pina and Kiryat Shmona, August 11, 2021. (Basel Awidat/Flash90)

Shots fired last week at the home of police Deputy Commissioner Jamal Hakrush, who is overseeing the fight against rising crime in Arab cities and town, is a further indication of the intensification of the battle with organized crime, he said.

“If until now it was clear that there was a behind-the-scenes war between the crime families and Israel,” Barlev said, then the shooting incident is “a declaration of public war on police, but, in practice, also on the entire country and on Israeli sovereignty.”

Last month, President Isaac Herzog said that organized crime is a national emergency in the form of “civilian terrorism.”

Israel fought an 11-day war in May against the Hamas terror group in the Gaza Strip. In response to thousands of rockets fired by the Palestinian terror group at Israeli cities, the IDF carried out hundreds of bombing raids on Hamas targets in the coastal enclave.

Alongside the escalation in violence between Israel and Hamas,  the mass unrest in mixed Arab-Jewish locales in Israel was also fueled by anger over clashes in Jerusalem’s Old City and protests over the pending evictions of Palestinian families in East Jerusalem.