There have been increasing demands for a state probe of the tragedy at Lag B’Omber celebrations last week when 45 people were killed in a crush and over 150 injured.

During a meeting of senior police commanders, Shabtai declared that he would make a formal request to Attorney General Avichai Mandelblit to set up a state commission of inquiry, the report said.

At some point during the Monday morning meeting,  Ohana arrived and, after learning of Shabtai’s intention, asked to speak with the chief in private. When they returned to the room, Northern District Commander Shimon Lavi also voiced his request for a state inquiry, at which point Ohana asked to speak with him too, in private, according to the report.

What was said between the minister and the two police officers was not reported but no request has been made by Shabtai to Mandelblit, the report said.

Police said in response that during the meeting Shabtai had demanded that an investigative committee be established to examine the circumstances of the disaster and the role of all relevant organizations. Other options were also raised, including by Shabtai himself, the statement said.

Ohana spoke with the police chief and others both before and after the meeting, but before any final decision was taken on the matter the State Comptroller Matanyahu Englman announced a special probe of the disaster, which is nonetheless not a state inquiry commission.

“Therefore, it was decided, at this stage, to wait for the outcome,” the police said.

A statement on behalf of Ohana said that “as usual, in the past few days attempts are made to attribute to the minister and police claims and actions that have no relation to the truth. So also in this case.”

Ultra-Orthodox Jews gather at the grave site of Rabbi Shimon Bar Yochai at Mount Meron in northern Israel on April 29, 2021, as they celebrate the Jewish holiday of Lag B’Omer (JALAA MAREY / AFP)

Later in the day Attorney General, Mandelblit ruled there is no legal obstacle that would prevent the current caretaker government from forming a state commission of inquiry.

Prime Minister Benjamin Netanyahu, according to Hebrew media reports, fears the political repercussions of such an inquiry.

As attention moved from the tragedy of the lost lives, many of who were children or teenagers, the focus was being directed on the organization of annual Lag B’Omer events at Mount Meron where various ultra-Orthodox sects hold bonfire ceremonies in adjacent compounds on the side of the mountain around the gravesite of the 2nd-century sage Rabbi Shimon bar Yochai.

The site, the second-most visited religious site in Israel after the Western Wall, appears to have become a kind of extraterritorial zone, with separate ultra-Orthodox sects organizing their own events and their own access arrangements, no overall supervision, and police routinely pressured by government ministers and ultra-Orthodox politicians not to object.

Channel 13 reported that a police assessment ahead of this year’s Lag B’Omer events warned of the dangers of overcrowding at access points as well as the possibility of structures collapsing.

In particular, the document alerted of overcrowding in the Toldot Aharon compound, the scene of the crush, and urged that the area be expanded.

“Despite the addition of extra bleachers, it is evident that the area is too small to contain the numbers of celebrants,” the document said. “There, preparations should be made to expand it…and to widen the exit.”

The order was not followed through.

The police document noted that the fire lighting ceremony that occurs in the Toldot Aharon compound is not suitable for the location “since the number of participants is more than the compound can hold.”

According to Channel 13, a bonfire lighting ceremony in the compound was permitted to have a maximum of 3,000 participants, whereas in fact there were 12,000. 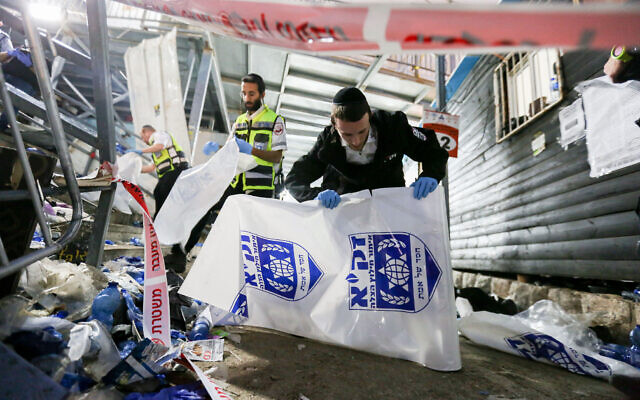 Israeli rescue service workers and police at the scene of a deadly crush during Lag B’Omer celebrations at Mount Meron in northern Israel, April 30, 2021. (David Cohen/Flash90 )

In general, the document warned that taking into account the space needed between each bonfire and the number of different compounds set up, “we have reached the limit of capacity.”

It also noted that there is particularly dangerous overcrowding at Meron between the hours 12.30 a.m. and 4.30 a.m.

“Consideration should be given to limiting the number of fires which will bring down the size of the crowd at the mount,” the police document advised.

The disaster happened at around 1.00 a.m. Friday morning.

Channel 13 reported police had provided the National Center for the Development of Holy Places a list of shortcomings at the site that needed to be corrected.

However, according to information obtained by the station, during a meeting to approve this year’s celebrations the center’s chief engineer said that all the faults were corrected. The minutes from the meeting have been passed on to the Lahav 433 nation serious crime unit, the report said.

A police source told the station that the force was shown authorizations showing that the shortcomings had been corrected.

The center, which sits under the Religious Affairs Ministry refused to comment on the report, the station said.

The station further said that police fear that some of the sects that operate compounds at Mount Meron may be trying to remove evidence from the scene to disrupt the investigation. Police have noticed unknown people who were seen taking documents from Mount Meron after the disaster, the report said.

Multiple reports in Hebrew media outlets indicated that there had been immense pressure by religious lawmakers ahead of the festivities to ensure that there would be no limits placed on the number of attendees due to the COVID-19 pandemic. Some 100,000 ultra-Orthodox pilgrims ultimately attended the event; a framework drawn up by the Health Ministry, in consultation with other government officials, police, and others, would have limited the event to 9,000 participants but was not implemented.