Energy Minister Karine Elharrar has postponed the renewal of Israel Chemicals Ltd.’s franchise to mine phosphates in the Negev Desert, until the Finance Ministry concludes an investigation into whether a daughter company, Rotem Amfert Negev Ltd., now called ICL Rotem, owes tens of millions of shekels in royalties to the state.

To date, the Energy Ministry has extended the factory’s franchise without a tender, despite Environmental Protection Ministry complaints about the pollution that phosphate mining causes.

A year ago, the ministry approved extending ICL’s franchise — which runs out at the end of this year — for another three years, without a tender and without any conditions.

This was opposed by the crowd-funded Lobby99, which campaigns on behalf of the public interest and which sets out to make ICL more accountable.

A week ago, as first reported by Kan news on Monday, Elharrar wrote to Finance Minister Avigdor Liberman that, since the Accountant General’s office had launched an examination of ICL Rotem’s royalty payments, she believed the franchise renewal should wait.

A spokeswoman for Elharrar said that phosphates are a natural resource owned by the public, and that if the correct amount of royalties is not paid, the franchise will not be extended.

A Finance Ministry spokesperson said that “the examination of royalties relates to past payments made by Rotem Amfert to the state.

“The purpose of the inspection is to check whether royalty payments were made in accordance with the company’s franchise agreement and with mechanisms established by law. The examination is expected to be completed in the next two months, and depends on the receipt of materials from the companies.”

ICL refused to comment on Elharrar’s decision to freeze the franchise extension.

ICL Rotem mines phosphates in the Negev’s Rotem area and, until recently, also did so at the Zafir field. The phosphate rock is processed into fertilizers and other industrial products.

With phosphate levels running low in the area, ICL is trying to get permission to mine at Sadeh Barir, which is close to Bedouin villages and to the Jewish city of Arad.

In July, the High Court of Justice heard from opponents of the plan who say it was approved by the National Planning and Building Council without consideration of health implications.

In a victory for the plaintiffs, the state told the court that it would send the outline for the construction of the phosphate mine back to the National Planning and Building Council for further discussion. 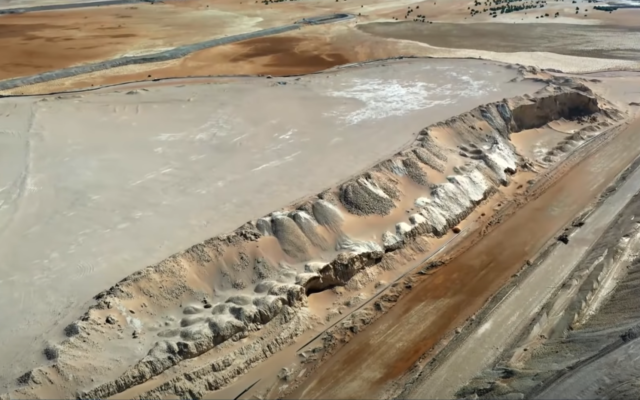 View of a pool of toxic sludge near the Zin phosphate mining plant in the Negev Desert, on August 11, 2021. (Screenshot/Kan public broadcaster)

Lobby 99’s deputy director Meirav David told Kan, “It cannot be that ICL makes billions from phosphates and pays just a few millions [in royalties] each year.” The company, she said, should be forced to put right the “severe environmental damage” it had caused and to pay higher royalties.

Rotem Amfert was responsible for one of Israel’s worst environmental disasters, when, on June 23, 2017, the wall of an evaporation pond collapsed, sending between 100,000 and 250,000 cubic meters (3.5 million to 8.8 million cubic feet) or more of highly toxic wastewater rushing through the Ashalim stream, southwest of the Dead Sea.

At least 13 ibex — a third of those living in the area — and numerous foxes and birds were found dead in the two weeks following the spill, according to the Environmental Protection Ministry.

A dead ibex found near the Ashalim stream after a massive acid waste spill, on June 30, 2017. (Mark Katz/Nature and Parks Authority)

Many contaminants still remain in the soil, hobbling flora growth and preventing fauna from bouncing back.

Earlier this month, locals complained that pools of toxic sludge at ICL Rotem’s Zin plant were at risk of collapsing. ICL responded that the walls were structurally sound and built according to standards. But the Environmental Protection Ministry said that it would be issuing updated instructions for the plant which would include a requirement to fix up the pools to ensure their stability. 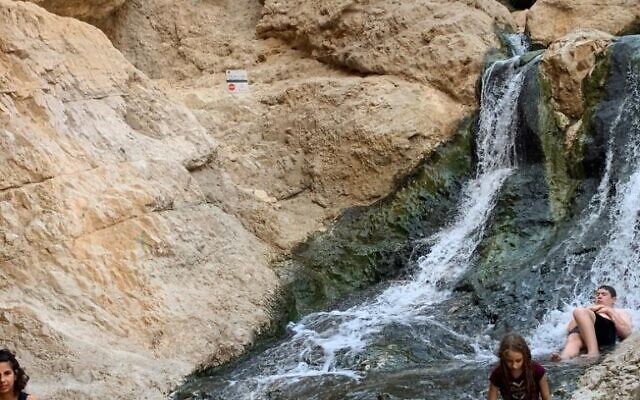 Visitors unknowingly enjoying the polluted waters of the Bokek stream near the Dead Sea. (Alon Tal)

ICL Rotem is also a defendant in Israel’s biggest environmental class action suit to date, which claims that it and another ICL company, Dead Sea Periclase Ltd., allowed tens of millions of cubic meters of industrial effluents — including radioactive ones — to contaminate an aquifer and the Bokek stream near the Dead Sea, which is a popular tourism site.