The plan, which must still be approved by the coronavirus cabinet, will limit such gatherings to those who are vaccinated, recovered or who present a negative COVID test. While the gatherings won’t be limited in size, masks will be mandatory, except when eating or drinking.

The pass will only be required at events with over 100 participants and will not apply to sit-down culture events such as theater, movies and concerts. It will only apply to events “held standing and with movement — including mingling between participants,” the PMO statement said, highlighting “weddings and celebrations, standing performances, parties and conferences” as examples.

Unvaccinated people, or those who have not recovered from the virus, will be barred entry unless they take a rapid virus test outside the venue or present a negative virus test taken in the previous 48 hours.

If given the green light by ministers, the plan is slated to come into effect next Wednesday, July 21.

“Our goal is to allow weddings and celebrations to take place in halls with minimum harm to the events industry and maximum protection for Israeli citizens,” Bennett said.

He said the plan would “will allow us all to live alongside the coronavirus and continue the activity of the events sector without endangering people attending celebrations.”

Health officials were said to feel the steps taken were insufficient. Unnamed officials told Channel 12 news that the pass “should be applied more broadly, including on restaurants, all performances, theater… everything.”

They also said funding for rapid testing outside venues was “a big problem” and will only work if it is funded by the government or made very cheap.

On Thursday, Bennett met in Tel Aviv with the owners of event halls and vowed to work with them to allow large gatherings to continue even as COVID cases rise.

“We want to win, but without closing everything,” he said. “However, if we do not act now, we will need to close everything.”

The prime minister said the government’s goal was “not to prevent weddings and celebrations at event halls… that would be the easiest and the most damaging, because there will then be ‘pirate’ weddings without oversight.”

The government has thus far resisted reimposing broad restrictions on movement or businesses, though Bennett warned on Wednesday that a lockdown could be needed if existing health rules are not heeded.

“We can beat the Delta variant without lockdowns, if we are all diligent and determined,” he said at a press conference, telling the public to make sure to wear masks indoors, get vaccinated and keep their distance from others in public.

“The easiest thing, like [the previous government] repeatedly did over the past year and a half, is to shut everything down. We may indeed end up there but we are going to try a different path this time. And it depends on all of us,” Bennett said. 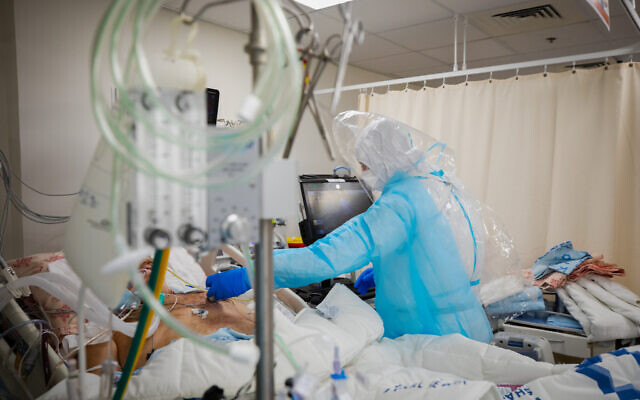 The announcement of the “Revelry Pass” comes as Israel recorded over 750 new cases of the coronavirus for a third straight day.

Health Ministry figures showed 765 new cases on Wednesday, after Monday and Tuesday saw 761 cases and 756 cases respectively. There are now over 5,300 active cases in the country, the highest figure since April 5.

The number of patients in serious condition ticked up slightly to 54, and two more deaths brought the number of those who died from COVID-19 since the start of the pandemic to 6,443.

In the last week, 14 people have died from the virus, after Israel went two weeks without recording a single death.

Despite the renewed outbreak, ministers decided on Tuesday to ease up on restrictions, shortening quarantine to seven days from the current 10-14 days and declining to back a Health Ministry proposal that would have reimposed further limits on gatherings.

The resurgence of the virus, blamed on the more contagious Delta variant, comes as over half of Israel’s population is fully vaccinated, with many cases reported among the immunized.