As current restrictions expired at midnight, the coronavirus cabinet, a panel that sets policy for dealing with COVID-19, held a vote by telephone in the evening on newly eased measures proposed by the Health Ministry.

The new measures, effective as of Thursday, include raising the number of people allowed to gather outdoors from 50 to 100.  The current limit of 20 people indoors remains in place.

Cultural venues are allowed to host up to 750 people under the Green Pass program, up from the current limit of 500. And large open-air stadiums can increase attendance from 5,000 to 10,000.

Indoor arenas can host up to 4,000 seated people.

The Green Pass is given to those who are fully vaccinated or have recovered from the coronavirus, granting them entry to public venues not open to others.

The ministers also eased restrictions in place for Memorial Day next week, allowing families of the fallen, who do not have the Green Pass, to attend ceremonies.

The new limits will be in place until April 22.

However, the ministers did not discuss increasing the numbers of Israelis allowed to fly in and out of the country and a separate discussion will be held at a later date.

Israel in recent months has significantly rolled back coronavirus restrictions by opening businesses, event venues and other activities, as morbidity levels have dropped amid the country’s world-leading vaccination drive.

Additionally, ministers had been expected to vote on lifting the requirements for some students to learn in “pods.”

Proposals called for the pod system, which limits the number of students who can study together, to be canceled for classes in grades 11-12 where there is a vaccination rate of more than 65 percent of students, down from the current requirement of 90%, Haaretz reported. It would also be canceled for all schools taking part in the “Education Shield” program, which requires students to undergo weekly coronavirus tests.

The move will ease the pressure on schools to provide separate classrooms for each group, allowing other students still learning partially from home to return to school more frequently.

But in a statement released Wednesday afternoon, Defense Minister Benny Gantz, who chairs the Blue and White party, said that the proposed measures did not go far enough, demanding that more students be allowed to go back to school full time.

Despite initial expectations that pods would also be canceled for 4th graders, in addition to 1st to 3rd graders, who returned to school this week without the pod system, ministers did not vote on the move Wednesday.

“Immediate agreements must be reached between the Education Ministry and the Health Ministry on an outline based on the immediate [lifting of the pod requirement] of first-fourth grades for full-time studies, which will maximize teaching power for fifth- and sixth-grades,” Blue and White said in a statement, threatening to allow the current restrictions to expire altogether if its proposal was not considered. 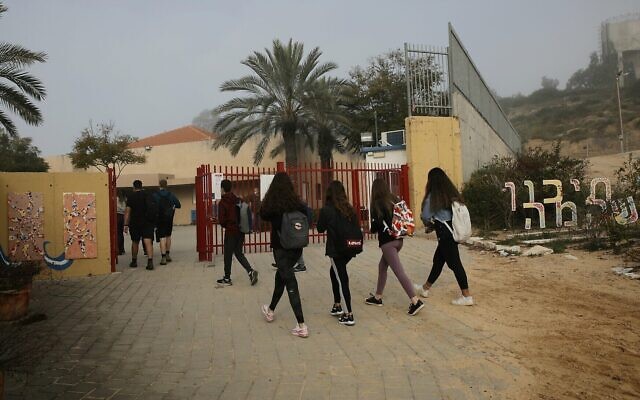 The easing of restrictions comes as infection rates continue to drop both among students and in the wider population.

Recent infection figures show a continued improvement over the past two months, credited chiefly to the successful vaccination campaign. The success comes despite more infectious virus variants proliferating and the gradual lifting of restrictions.

According to the Health Ministry, only 376 new patients were diagnosed on Tuesday, representing a positivity rate of 0.7% out of more than 57,000 tests. The R-rate stood at 0.78, up from a low of 0.63 at the beginning of the week. 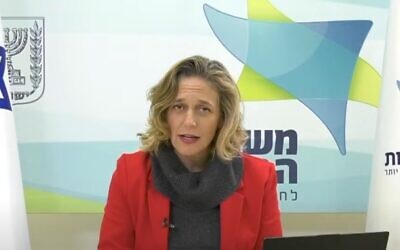 Dr. Sharon Alroy-Preis during a briefing in January 2021. (video screenshot)

Despite the decreased infection rates, the head of public health in the Health Ministry, Dr. Sharon Alroy-Preis, said Wednesday that Israel was still “in the midst of a battle” against the pandemic, and warned of the need to remain vigilant.

Speaking to the Ynet news site, Alroy-Preis said there remain “many outside threats that could develop here” — an apparent reference to virus variants that could potentially bypass the protection afforded by vaccines.

And she added that with “over a third of the country still not vaccinated… It’s not behind us, it’s not over.”