The coronavirus cabinet convened Tuesday evening to decide on reopening parts of the education system starting Thursday, with the Health Ministry said to have hammered out a plan to send some kids back to preschools and schools in areas with low-to-medium coronavirus infection levels.

Hebrew media reported that kindergartens and grades 1-4 and 11-12 will open in cities designated as “green” and “yellow” in the government’s color-coding system for morbidity rates.

Some medium-to-high infection cities, flagged as “orange,” will also see these grades opened, depending on various statistics and provided that at least 70 percent of its residents aged 50 and up are vaccinated. Most “orange” cities don’t meet the criteria.

Education Minister Yoav Gallant claimed Monday that schools would not be a source of new outbreaks and that children were being infected at home. Moreover, he maintained that towns with low infection rates should be allowed to reopen schools immediately, lamenting what he termed the Health Ministry’s foot-dragging on the matter.

Meanwhile, ultra-Orthodox party leaders were pressuring Netanyahu to also resume studies in the worst-hit “red” areas, with a special plan enabling studies outdoors or with a lower-than-normal number of students per class, according to the Walla news website.

Shas chief Aryeh Deri and United Torah Judaism leaders Moshe Gafni and Yaakov Litzman are said to be furious over the plan to only reopen schools in lower infection zones, as most predominantly ultra-Orthodox areas are classified as “red.” Many Haredi education institutions have continued to operate illegally, and police have been accused of being reluctant to enforce closures.

Kanievsky, widely acknowledged as the preeminent living Ashkenazi Haredi spiritual leader, said that “the education of Israel’s children is at the very bottom of the government’s concerns. Every other issue is given priority over education, which is the lifeblood of the nation.”

He added that “millions of Israeli children have been at home for a year, in both spiritual and mental danger, and an immediate solution must be found to bring them back to school as quickly as possible while maintaining health rules.” 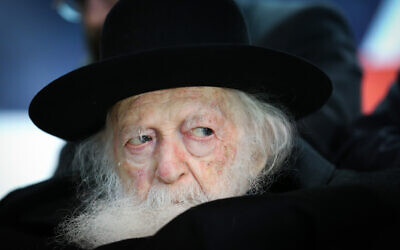 Rabbi Chaim Kanievsky attends a campaign event for the ultra-Orthodox Degel HaTorah party in the northern city of Safed, on February 26, 2020. (David Cohen/Flash90)

Kanievsky has faced intense criticism for his handling of the pandemic and for rulings given to his followers. He has instructed schools to open in defiance of government decisions on several occasions, leading hundreds of institutions to illicitly open their doors throughout the pandemic.

Kanievsky’s instructions, rather than government orders, are the final word for many in the ultra-Orthodox community.

Malls and restaurants have for days been threatening to reopen on Thursday in defiance of government orders. The Israel Commerce Forum, a coalition representing the businesses, responded to Kisch that it had lost faith in government promises.

“You promised us 60 days ago that you were shutting down commercial activity for two weeks, and we’re still closed. We’re tired of your promises. We will open on Thursday,” it threatened. 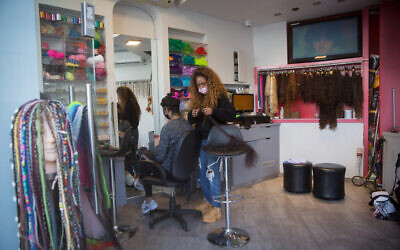 A hairdresser wearing a face mask at a hair salon in Tel Aviv, on February 7, 2021. (Miriam Alster/Flash90)

The ICF was established to unite national commerce, shopping malls, markets, and restaurant organizations in confronting government policy during the lockdown.

Israel’s third nationwide lockdown to curb the spread of COVID-19 was slightly eased on Sunday at 7 a.m., after over a month, as the country continued to grapple with thousands of daily new cases.