More than 10 percent of Israeli children who were diagnosed with the coronavirus show signs of suffering from the so-called “long COVID,” the Health Ministry announced Monday.

According to the data, gathered from a follow-up survey of parents of 13,864 children aged 3 – 18 who had recovered from the virus, 11.2% reported symptoms of “long COVID.”

Of those who reported long-term symptoms, 1.8% of children under 12, and 4.6% of those aged 12 to 18 were still suffering from symptoms six months after the illness, the survey found, noting that the probability increased with age.

Among those 12 to 18, chances of long COVID were higher among those who had coronavirus symptoms, however, researchers also found long COVID even among 3.5% of the children who were asymptomatic when they tested positive.

More than 200,000 children under 18 have tested positive in Israel, with about half of them asymptomatic, the survey said.

“The meaning of this is that there are currently thousands of children in Israel suffering from long-term effects,” the statement said.

Children, mask-clad due to the COVID-19 pandemic, stand on a street in the ultra-Orthodox city of Bnei Brak, on September 6, 2020. (Jack Guez/AFP)

The coronavirus causes the body to produce a long-lasting immune response that actually attacks the body instead of the virus, possibly explaining why some patients continue to have a variety of symptoms long after they are clear of infection, scientists have found.

The result can damage the body, including the brain, blood vessels, and liver, areas that have been seen to suffer in those with symptoms of what has become known as “long COVID” — continued illness, fatigue or breathlessness in those who were infected and then recovered from COVID-19, the disease caused by the coronavirus.

Long COVID is believed to affect about 10% of 18- to 49-year-old coronavirus patients, and as much as 20% of those over the age of 70, according to a recent Yale report. 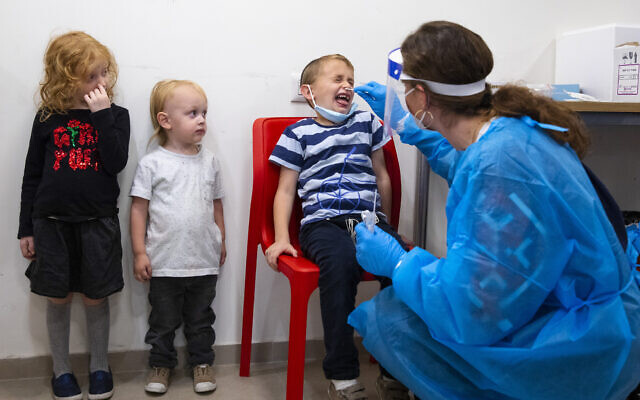 According to the survey, 30% of parents of those affected reported a deterioration in “neurological, cognitive, and mental health abilities,” including disturbed sleep and concentration problems, compared to before the children tested positive for COVID-19.

However, the statement cautioned that, without a control group, not all of these effects could definitively be attributed to the virus, noting that the effects of prolonged lockdowns, school closures, and Israel’s May conflict with Hamas, in which thousands of rockets were fired at civilians — could also have affected the children’s well-being.

It also noted that the survey relied on self-reporting and not diagnoses from doctors.

“However, these findings are in themselves distressing and call for further investigations into the effects of the coronavirus period on the cognitive/mental health situation of children in Israel,” the study said.

The Health Ministry said they had a 94% response to the survey, which covered all sectors of Israel’s population.

Health Ministry data released Friday morning showed that more than half of all COVID cases were coming from school-age children, although traditionally children have generally not been affected as badly by the coronavirus.

More than 41,000 of the current active cases are among school-age children, and another 108,000 students are in mandatory quarantine due to exposure. Close to 56% of those who tested positive on Sunday were students. 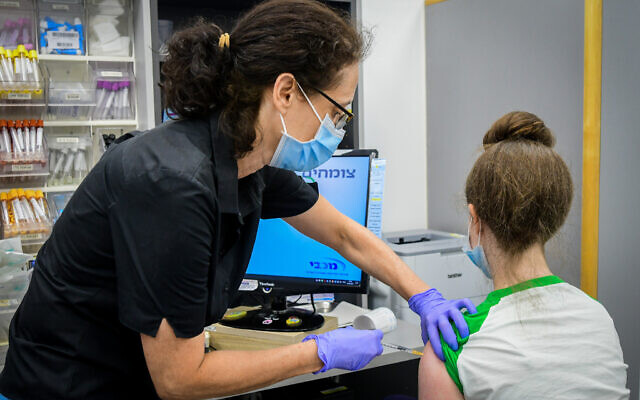 Israel has been pushing a major vaccination campaign for children aged 12-18, since kids went back to school at the beginning of September. Nonetheless, Israel’s virus numbers rose, as the country struggled to deal with the Delta variant and waning immunity from the vaccinations.

Also on Monday, Channel 12 reported that the Health Ministry is slated to ease restrictions for children under the age of 12, who are too young to vaccinate, in response to growing frustration among parents over testing requirements.

The ministry is expected to no longer require children under the age of 12 to show proof of a recent negative COVID-19 test in order to enter public swimming pools. The cabinet still needs to approve the measure but is expected to do so on Tuesday, the network said.

If case numbers continue to fall next week, the testing requirement for children at restaurants and outdoor attractions such as amusement parks will be scraped as well, according to the report.

The Health Ministry is also working to present a pilot program for rapid testing kits for students to use in order to avoid having to quarantine following exposure to the virus, Channel 12 said. However, it is unclear whether the budget exists to make such tests available year-round.

Separately, the Health Ministry announced Monday that 7,781 people were diagnosed with coronavirus over the past day, with a positivity rate of 5.22%.

According to the figures, there are 684 patients hospitalized in serious condition across the country, with 247 of them in critical condition, and 186 on respirators.

In total, 7,406 people have died since the beginning of the outbreak.