When American Airlines Flight 11 struck the World Trade Center’s North Tower on September 11, 2001, then-Mossad chief Efraim Halevy was in the middle of a meeting with then-prime minister Ariel Sharon.

“Suddenly someone came in the room, passed him a piece of paper. And he said to me, ‘Something has happened. I think you shouldn’t be here, you should be in your office.’ I said, ‘What happened?’ He told me briefly, and I was off on my way,” Halevy recalled, speaking to The Times of Israel ahead of the 20th anniversary of the September 11 attacks.

“The 9/11 events caught everyone by surprise,” he said.

Halevy, 86, had been the head of the Mossad spy agency for three and a half years when two planes hit the World Trade Center, a third hit the Pentagon and a fourth crashed in a field in Pennsylvania, after the passengers regained control of the aircraft from the hijackers and prevented it from hitting its target, which investigators believe was either the White House or the US Capitol.

The British-born spymaster was wary of revisiting many of the technical questions of the Mossad’s activities following the attacks — what they knew and when and what was shared with the United States — but he said there was a general effort to bring whatever relevant information it collected with the Americans.

“I’m now well past 80 and to start going into my memory, which has all kinds of ‘boxes,’ some which are very full and some of which are emptying up — I would rather not go into that minefield,” he said.

“We had an understanding that on this issue we had to cooperate in bringing information [to the US] if it came our way and to initiate activities to gather information subsequent to the attack.”

In this September 11, 2001 file photo, the twin towers of the World Trade Center burn after hijacked planes crashed into them in New York as part of a plot by al-Qaeda leader Osama bin Laden. (AP Photo/Diane Bondareff, File)

Halevy recalled a grim mood in the Mossad following the attack and not only out of an understanding that a major event had taken place with the potential to significantly reshape the world.

“It was a very somber atmosphere. An Israeli was killed in one of the aircraft, he had been an officer in an elite unit in Israel. So there was an Israeli ‘angle’ to this, beyond the Israelis who were killed in New York, which was an event itself,” he said.

American-Israeli mathematician and businessman Daniel Lewin is believed to have been the first person killed in the September 11 attacks, having been stabbed to death by one of the terrorists on board American Airlines Flight 11 as he apparently tried to intervene and prevent the hijacking. 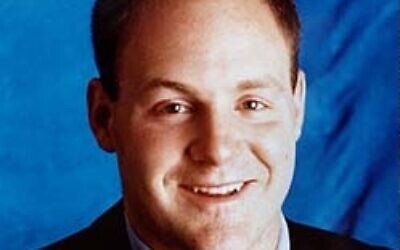 Lewin, who had moved to the US to earn a Ph.D. in mathematics from MIT years before, served for four years in the Israel Defense Forces’ famed Sayeret Matkal, an elite unit that works closely with the Mossad and Israel’s other intelligence services. In addition to Lewin, five Israelis were among the roughly 3,000 people killed in the attacks on the Twin Towers.

Halevy said he quickly understood the severity of the September 11 attacks and that they would have a profound impact on the world, saying in the years that followed that they would lead to a “World War Three.” Besides America’s twin wars in Iraq and Afghanistan — the latter of which formally ended last month — there have indeed been many wars in the Middle East in the past 20 years, in Yemen, Syria, Libya, Lebanon and Gaza, which can at least partially be traced back to the September 11 attacks. 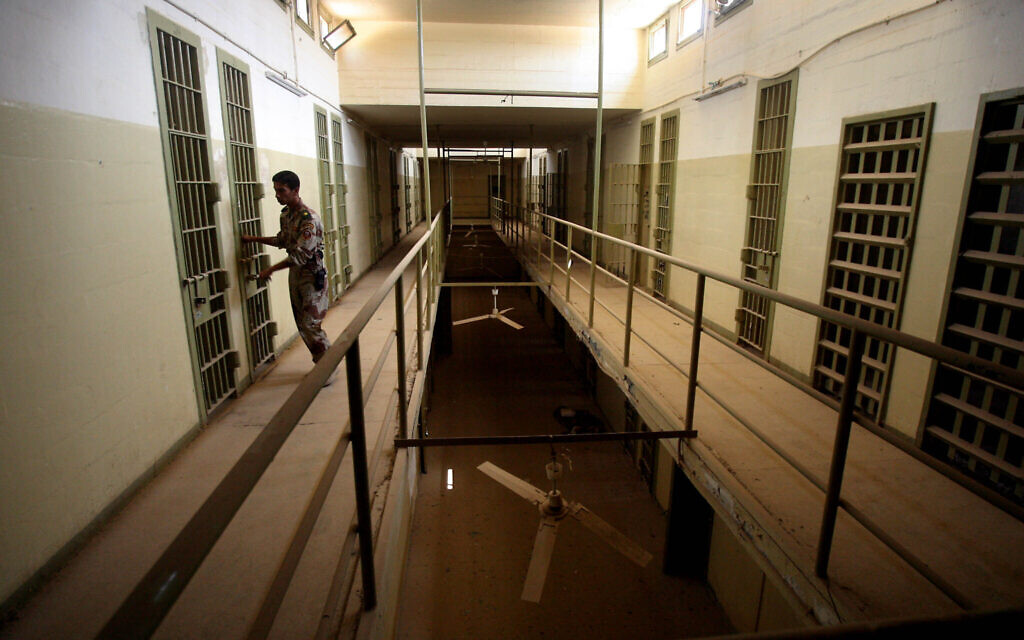 Illustrative — In this Sept. 2, 2006, file photo, an Iraqi army soldier closes the door of a cell, in Abu Ghraib prison on the outskirts of Baghdad, Iraq (AP Photo/Khalid Mohammed, File)

Halevy noted that intelligence services made a “definite turn to prevention rather than punishment” in the aftermath of the September 11 attacks, leading to a rise in practices like surveillance and torture — “enhanced interrogation techniques,” in the whitewashing parlance of the US government.

“The rules of the game changed, in a very remarkable way. And prevention has become an accepted approach in certain kinds of ways,” he said.

Though there have been reports over the years that Israeli intelligence services warned their American counterparts of a potential “major assault on the United States” by Osama Bin-Laden ahead of the September 11 attack, as the Los Angeles Times wrote in 2001, Halevy said the specific details of the threat were not known or anticipated.

“There was no prior warning of the event in the United States. It caught everyone by surprise,” the former spymaster said.

But that is not to say that no one saw an attack by Al-Qaeda coming, in the years prior to the September 11 attacks, the terrorist group had conducted a number of successful operations on American targets around the world, showing a high level of sophistication and ability.

“It was preceded by three major events: The first two where when two US embassies were attacked in Nairobi and Dar es Salaam,” Halevy said, referring to two nearly simultaneous bombings by Al-Qaeda in Nigeria and Tanzania, respectively, which killed more than 200 people in Nairobi and 11 in Dar es Salaam.

“The other was an attack on an American naval craft off the coast of Aden,” he said. In October 2000, members of the group sailed a small boat packed with explosives up to the USS Cole off the Yemeni coast and detonated their charges, killing 17 US sailors and injuring dozens more. 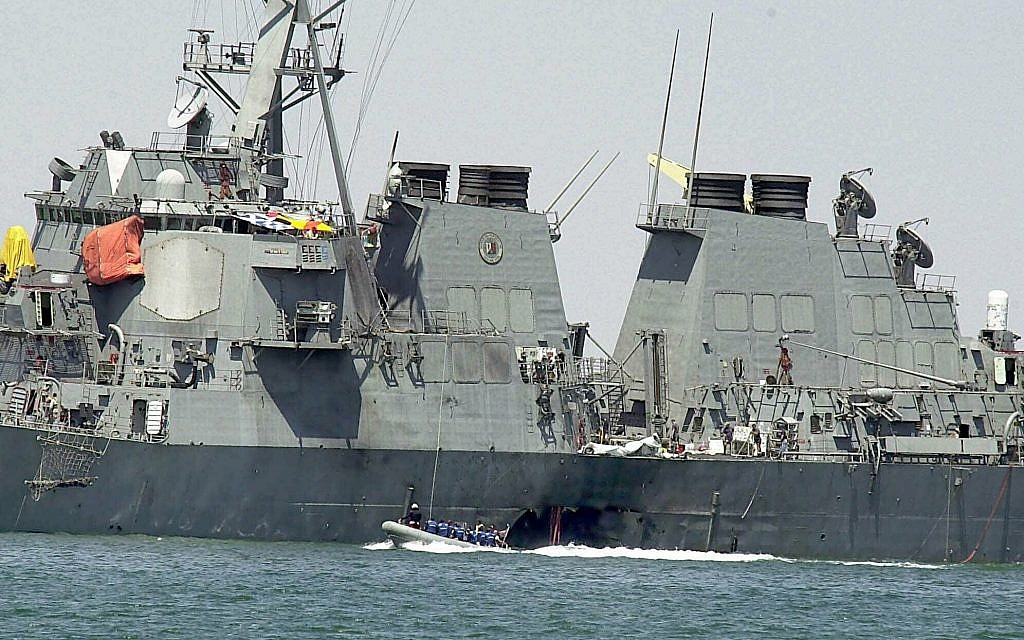 In this October 15, 2000 file photo, experts in a speed boat examine the damaged hull of the USS Cole at the Yemeni port of Aden after an al-Qaeda attack that killed 17 sailors. (AP Photo/Dimitri Messinis, File)

“All of these were events that took place prior to 9/11 that certainly showed that the international terrorist organization Al-Qaeda were very capable of all kinds of operations that were, shall we say, firsts in terms of the scope of the attack,” said the soft-spoken, British-accented Halevy.

The September 11 attacks were also the first in which the perpetrators used the internet to prepare for the attacks. One of the architects of the plot, Khalid Sheikh Mohammed, used the web to search for the American flight schools where some of the terrorists learned to operate the aircraft used in the attacks. Had intelligence services been tracking the online activities of Mohammed, a known terrorist operative, this would have set off a potential red flag.

“In the lead-up to the event, they used the internet, and no one covered the internet in such a way. That was also a very, very stark revelation,” Halevy said.

Halevy was a staunch defender of then-CIA chief George Tenet who came under fire for failing to anticipate and prevent the attacks, writing an article in his defense in The Economist after the 9/11 Commission released its damning report on the matter in July 2004.

The 9/11 Commission, formally the National Commission on Terrorist Attacks Upon the United States, accused the CIA, among other things, of lacking “imagination” in foreseeing the attacks, particularly in seriously considering the possibility that an airplane may be used to carry out an attack “even though suicide terrorism had become a principal tactic of Middle Eastern terrorists.” According to the commission, such analysis would have prompted intelligence agencies to recognize the warning signs ahead of the September 11 attacks and potentially prevented them. 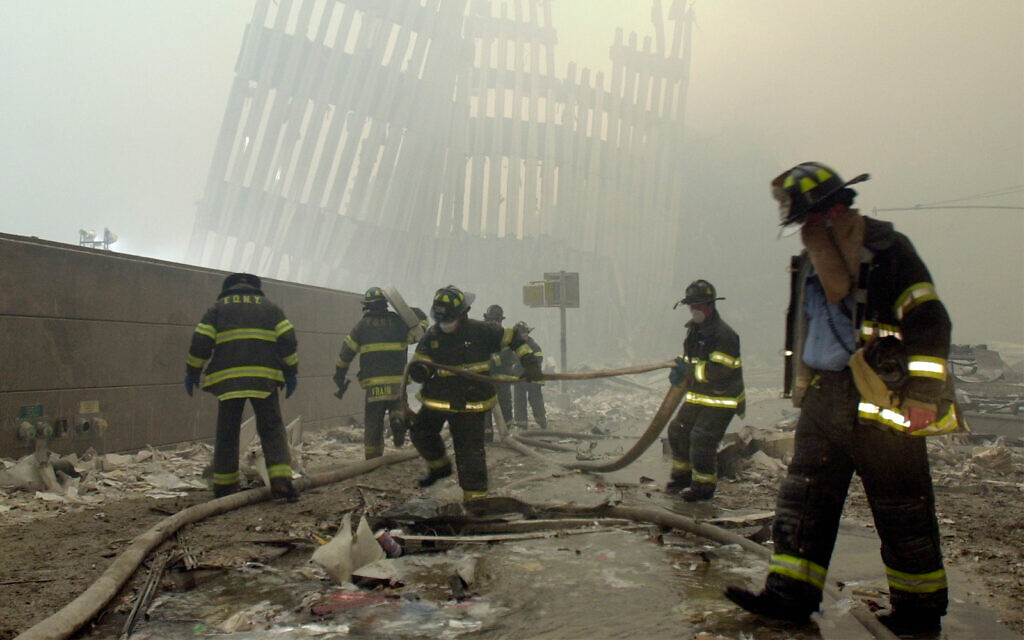 Firefighters work beneath the destroyed mullions, the vertical struts that once faced the outer walls of the World Trade Center towers, after the terrorist attack on the twin towers in New York, September 11, 2001. (AP Photo/Mark Lennihan, File)

Halevy appreciates the importance of such creative thinking, but said that this alone is not enough. “I can imagine all kinds of things that might happen tomorrow morning, that the Iranians might do, that the Taliban might do. Imagination is important, but it also somehow needs to be linked to some kind of a factual basis,” he said.

In his Economist essay, Halevy noted that even if he had perfectly envisioned a September 11-style attack in advance, Tenet had virtually no chance of getting the US government to put into place the security precautions necessary to prevent it.

“Even if the powers-that-be at the time had been as imaginative as possible, and if, for instance, the director of the CIA had publicly imagined the horror of a simultaneous attack on the White House, Congress, the Pentagon and the New York twin towers, I seriously doubt that the president would have found support for what was sanctioned after that fateful day,” Halevy wrote in 2004.

Yet Halevy acknowledged that there were major gaps in intelligence services’ scopes, preventing them from seeing the warning signs of a suicide attack involving hijacked airplanes.

“The fact that it was such a coordinated effort, that some of the people who participated in the attacks and took control of the aircraft had undergone training in a facility in Florida and learned how to fly aircraft, and nobody took any notice of this was a sign that people were not looking in the right direction. The events of September 11 were a novelty the kind of which no one ever predicted,” he said.